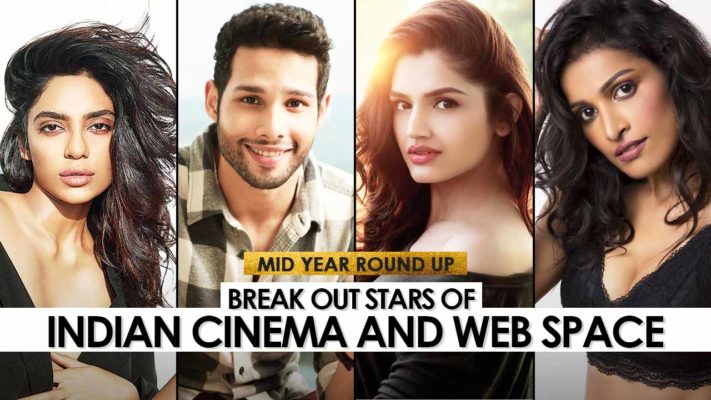 2019 saw a huge break out of actors in both films and the web space, opening doors to a wide range of talent pool for the new age writers and directors to rely on, to give out stellar stories.  From Gully Boy to Delhi Crime, incredible subjects have been put out this year and it wouldn’t have been easy for the directors to carve such incredible stories without these actors’ spell-bounding performances. Here is our mid-year round-up of Indian Cinema and Web Space.

I think it’s quite obvious that this list wouldn’t begin without this name on the top. What a debut of Sher! Siddhanth Chaturvedi who previously worked in a web series called Inside Edge made heads turn with his performance in Gully Boy. The conviction with which he played the role was impeccable. He also dubbed for Chris Hemsworth’s role in the Hindi version of Men In Black recently. With careful picks and amazing performances, Siddhanth Chaturvedi is on his way to make it big.

With her exceptional portrayal of Badki, the warrior sister in Pataakha, Radhika has proven that she’s all set to play the weirdest roles possible. This year she rocked it with Mard Ko Dard Nai Hotha in which she looks nothing like she did in Pataakha proving the fact that she’s here to portray the most interesting roles once again.

Vijay has been acting for several years now but 2019 has to be his break out year. He made a mark with his sincere portrayal of Moeen in this year’s first biggest hit with huge critical acclaim for Bollywood, Gully Boy. He plays a friend who Murad reaches out during the most difficult times. Moeen comes across as someone who is there for his loved ones and isn’t afraid to take up unlikely ways to do so and Vijay does an incredible job at playing this role.

Sunil Grover has been a household name for years now with his impeccable screen presence and stellar performances of god knows how many characters in Comedy Nights With Kapil and The Kapil Sharma show. His performance as a nosy neighbor in Pataakha garnered critical acclaim but it was Bharath which released in June this year that gave him commercial success.

Ananya Pandey left no stone unturned to make the most of her role in the much-anticipated franchise film Student of the year 2. She made a charming debut and is out there to make a mark with interesting projects in her bucket. Hope to see her in more roles with solid scope to perform.

All those who are youtube junkies are quite familiar with this name. Jitendra Kumar has been associated with TVF’s short films and series for a long time now and is the go-to person for any character. He made his debut with Shuruaat Ka Interval in 2014 and hasn’t looked back ever since. After convincing and engaging performances in multiple series, he appeared in another feature Gone Kesh which was released this year. But, It has to be The Kota Factory that made him a household name. This series got huge acclaim and positive response from the audience and hence the special mention of our very own Jeethu Bhaiyya.

Arjun Mathur got a stunning break with Made In Heaven after almost a decade long journey with the industry. His portrayal of Karan Mehra, a wedding planner who struggled with his identity and finally fought the odds to celebrate it is absolutely beautiful. The whole arc of the character is carried out with utmost conviction. He made the best use of one of the most prominent opportunities and hoping to watch a lot more of him in the future.

Another gem that Made in Heaven gave us is Sobhita Dhulipala. Her performance in Made In Heaven as Tara Khanna, a flawed, vulnerable yet strong wedding planner is absolutely relatable and breathtaking. With interesting film choices and collaborations, Sobhita is carving a very distinct career for herself and we can’t wait to watch a lot more of her stellar performances.

Mayur More as the lead of KOTA factory, India’s first black and white show gave an interesting debut into the web space. His portrayal of an IIT aspirant was accurate and entertaining. Starting with plays, Mayur went on to do a couple of feature films but KOTA factory has to be his break out series for the kind of response it received from the audience.

Rajesh Tailang grabbed attention with his magnificent performance in Delhi crime, one of the best web series of 2019. Although Shefali Shah outshines everyone with her performance, Rajesh does make a mark as an officer who works tirelessly and a father who is struggling to get his daughter married. He even worked in Selection day and Mirzapur last year and is currently grabbing interesting opportunities. Hoping to see him a lot more in the future!

I first saw Rajat in a small but important role in Girl In The City back in 2016 (Yes, I didn’t know about Udaan) and he has been making a mark ever since with interesting projects in his hand. Particularly this year, with Hey Prabhu and Love, Lust and Confusion 2 he received a lot of following and acclaim for his performance.

I recently happened to watch Article 15 and was astounded by how impressive Sayani’s performance was despite very little screen space. She captured my attention with the few lines she had. 4 More Shots Please was her most important project this year. It garnered a lot of attention from critics and viewers. I hope she finds more interesting and challenging projects to present the immense talent that she has.

Anupriya Goenka last appeared in Kissebaaz which fell flat at the box office but has been grabbing interesting opportunities in the web space. She was seen in sacred games last year and this year she kept the ball rolling with 4 new series, The Final Call, Abhay, Criminal Justice and humorously yours 2. Hope to see her in more interesting projects in the years to come.

Yashaswini made her debut in 2016 with Dear Zindagi and Phobia. Followed by these, she appeared in a lot of youtube videos and a couple of series. This year has to have a special mention in her career for she appeared in the most acclaimed web series, Made In Heaven and Delhi Crime. She even got special acclaim for her role in the film The odds. OTT platforms have been a boon to her for her work has been much prolific here.

Another actor who made a mark with Love, Lust and Confusion this year was Tara Alisha berry. She did a splendid job in portraying the role of Poroma, an unapologetic and fearless woman who explores love and relationships in her own style. The series recently put out the second season, which promises a bigger fun ride than earlier.

Priya Bapat is another actress who grabbed our attention this year with her incredible performance in a Hotstar original series, Mayanagari – City of Dreams. She seems quite promising and we are hoping to see her in a lot more projects in the future.

Shweta Varma has been in the film circuit for quite some time. She has done movies like Vasham, Panileni Puli Raja, etc. But this year she got popular with her movie Mithai in which she earned a lot of praise from all around. Then she went on to feature in the web series ‘Ee Office Lo’ on Viu and with it she had a breakout moment on the web space. Shweta Varma is a talent to look out for in the future. She is definitely someone who can essay different characters convincingly.

Gnaneswari Kandregula is an engineering graduate who shot to fame by winning the TV reality show Pradeep Machiraju’s Pellichoopulu in 2018. Hailing from Vizag, Gnaneswari has always been a fashion enthusiast and has featured in quite some short films. This year, she went on to star in a web series called ‘Oka Love Janta’ with which she impressed everyone with her amazing acting skills. With her next web series on MX Player, ‘Kill Bill Kadhal’ Gnaneswari is ready to show her mantle with her natural acting talent. She is quickly spreading her wings in the digital space and is going to be a force to reckon soon.

Jikki Nair made her acting-directing debut with a Tamil web-series called Fuck buddies. She even co-wrote it. She was then seen in Auto Shankar. Her bold and fierce performance garnered positive acclaim and a lot of writers and viewers are rooting for her for more interesting projects.