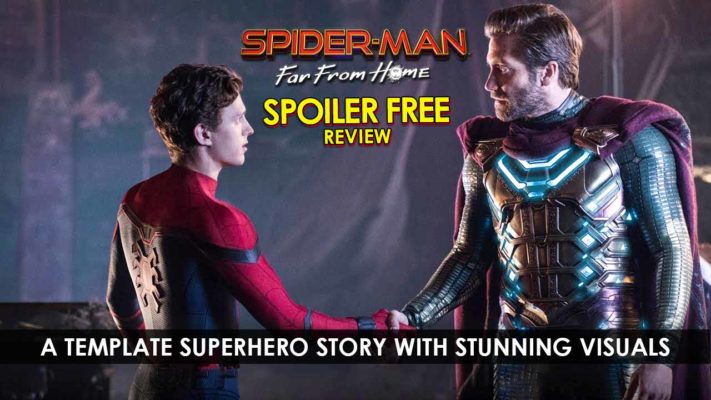 The Next Chapter In MCU

Finally, the much-awaited movie of the Marvel Cinematic Universe (MCU) is out. Spider-Man: Far From Home, a sequel to Spider-Man: Homecoming which came in 2017 is here. People have been waiting for it to know what lies next in the MCU given the retirement of its major assets in Tony Stark and Steve Rogers. We are still in the hangover of the Avengers: End Game and particularly Tony Stark’s death and Robert Downey Jr’s retirement from the franchise. Hence the wait for this Spider-Man sequel has been much anticipated. Now that I have watched the movie, I’m left with mixed reactions towards it. Let’s get into the world of Peter Parker and understand more about this movie.

Right After The End Game

The movie begins right after the events of Avengers: End Game. Peter Parker (Tom Holland) is trying to cope with the loss of his mentor Tony Stark, while his aunt May (Marisa Tomei) and Happy (Tony’s ever-reliable friend played by Jon Favreau) help him overcome that. Meanwhile, we get to know that the Thanos’ snap from the End Game is termed as a ‘Blip’, and we are shown the mild repercussions of the Blip in this world. On the other hand, we see a threat in the form of some ‘Mysterious’ being in Mexico, which Nick Fury (Samuel L. Jackson) and Maria Hill (Cobie Smulders) go to tackle in vain.

The school which Peter is in organizes a summer field trip to Europe for two weeks. Peter decides that he wants to enjoy a normal life and be away from the superhero lifestyle and hence sees this trip as a get away from it. Peter likes MJ (Zendaya) and tells Ned (Jacob Batalon) how he has planned to propose MJ on the trip. During some fundraiser event, Happy informs Peter that he will get a call from Fury soon which Peter does, but he decides to ignore it. At the same event when the people start asking him questions related to Avengers and particularly Tony Stark, he is saddened as he misses Tony.

Well the school comes to Venice and while Peter is trying to get close to MJ, another creature attacks them and they are saved by someone mysterious who is named Mysterio later. Nick Fury then comes and meets Peter and takes him to Quentin Beck AKA Mysterio (Jake Gyllenhaal). Beck tells Peter that he is from a parallel universe and all these creatures who are called Elementals, have destroyed his planet and are here to do the same. Beck and Fury ask Peter for help in defeating these Elementals which he doesn’t accept. Peter is going through an emotional set back after the demise of Tony Stark and doesn’t see himself filling up to Tony’s big shoes, while everyone expects him to do that. Also, he doesn’t feel qualified enough to help Beck and tells Fury that he wants to enjoy the trip and leaves. What happens next is major spoilers and it is to be seen in the movie.

The movie constantly shows us how Peter is burdened with high expectations from everyone. He is seen and considered as the next Iron Man and someone who will take Tony Stark’s long and legendary legacy forward. Peter feels he is not ready for this yet and he thinks he is just a kid and it’s too early for him to take this. Along with this crisis, he is trying to battle with some random good looking kid who is getting closer to MJ every moment. I mean I get the former dilemma of stepping up and all but trying to woo your crush comes before saving the world right after the world changing SNAP happened?! WOW, That’s cold! Anyways that is what Peter feels strongly about.

The story of the movie is as thin as Robert Downey Jr’s chances of starring as Iron Man again. It’s a very template superhero story. The makers instead focus on the memories the audience has of the End Game, who is waiting to see what happens next only adding to it, a pinch of the emotional baggage the central character Peter Parker goes through.

TBH, I really liked the ‘love track’ between Peter and MJ but the timing of it in the movie is not quite fitting. There is a lot of stakes out there and you can’t expect someone who has been fighting aliens, species and THANOS to run away from his definitive role. Peter Parker did evolve as a character across the last two Avengers movies and this looks like his character went perhaps a step back.

Another issue I found in the movie is that there is nothing new to offer. I mean anyone who is even mildly educated in Spider-Man mythology, knows the ‘big reveal’ even though the trailers depict it otherwise. Apart from that, there is no element of surprise or any Goosebumps movement whatsoever. The movie just keeps falling flat as the paper-thin story moves forward towards its CGI rich climax.

It clearly looks as if the big heads at Marvel were never bothered about the story or its treatment. They knew they have to just fulfil the demand created after the huge success of End Game and they cater to it. The writers had a lot of material to depend upon and they even chose an amazing character from the comics to include, Mysterio. But he is in the movie just for the sake of it. His character is not at all fleshed properly and sticks to just monotones. How disappointing to waste such a character that has a great background story to him and is easily one of the toughest and smartest rivals Spider-Man could ever face?

Positives Out Of The Movie

I really like the stunning visuals in the movie. It’s so pleasing to the eye to watch all the aesthetics created. The action sequences though being less in number; are spectacularly choreographed and hook you all through. One particular sequence which is very similar to the one in Doctor Strange, where Strange gets a taste of the magical world through some breathtaking trippy visuals, is incredible and out of this world.

Zendaya’s performance particularly provides a fresh breath of air in the movie amidst all the chaos. Her portrayal of a confused and a nihilistic teenager is on point. The first half consists of some light moments majorly between Tom Holland and Jacob Batalon and the latter never fails to impress with his superb comic timing. You are bound to get laughs with some well-written comedy pieces. Although they couldn’t utilize the great potential possessed in the form of Jake Gyllenhaal, he will leave you more than impressed with his multi-skilled ability. The same goes with Marisa Tomei who looks like she is playing an extended cameo but doesn’t fail to leave her mark behind.

The biggest thing I like about the movie is its mid-credit and post-credit scenes. That is some way to end a movie and it teases you enough for you to wait and know what’s next in the pipeline. Do stay back for these scenes after the movie.

As an MCU fan like myself, one can go and watch this movie as it is more of a connecting bridge between Phase Three and Phase Four and will warm you up for what is next to come. Don’t go in with big hopes as they have promised (read illusioned) through the trailers and the marketing. Go to watch the movie with a mindset that you will enjoy watching this world again and have some fun. Cheers.!!