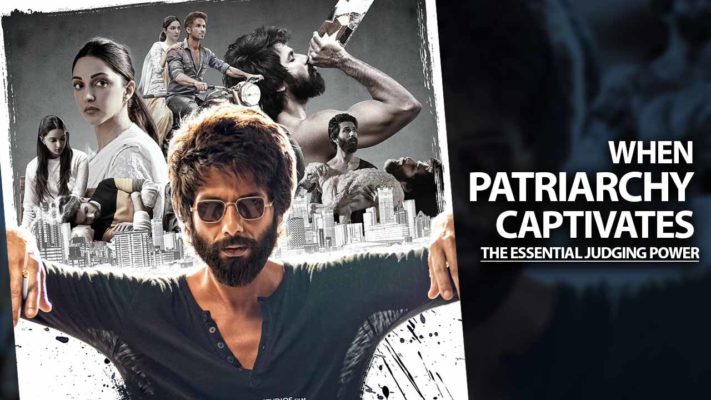 Bollywood has a long history when it comes to objectifying women. Although it started way back in the late ‘70s and early 80’s, it is pretty appalling to see how the trope has never ceased to be even in the 21st century. The most recent and perhaps one of the most toxic examples of such pathetically sexist film is ‘Kabir Singh’. A remake of the popular Telugu film, ‘Arjun Reddy’, Kabir Singh exemplifies everything that feminists since the past two decades and even more are fighting against – against trivial objectification of women, against treating women as ‘something to be owned’.

However, knowing Bollywood’s obsession with toxic masculinity is not something new (though it is changing considerably towards the better), the fact that hit us most about ‘Kabir Singh’ is not its protagonist not knowing anything about consent but how a group of women keeps defending the protagonist’s each obnoxious move and desires to beget a husband/boyfriend like him in reality. Like, really?

After the movie, ‘Kabir Singh’ released, there were numerous social media posts – most against the toxic masculinity pervading the film through some favoring the film, proclaiming that Kabir has the right to be a bit on the rough-and-tough side since he had been a brilliant student and the best surgeon ever. As if, education is a license to violence. Amid all such hullabaloo, some of the posts stood out – these were from women who were protecting the protagonist, saying these are the kind of heroes that they want in their lives. To me, this is by far the most lethal consequence of the film for women – who are mostly educated – are turning a blind eye to the burning issue of ‘consent’ that concerned people across the world are literally dying fighting for.

Have We Become Products Of Patriarchy?

Since times immemorial, women have been fed with the idea that men are pathologically rough, and hence, if he hurts a little (or, not so little) or becomes a bit eccentric while showing his love to you, it is pretty natural. And so, there started a long and dark era of women becoming objects and plaything in hands of men – most men, that is. In the Indian household, beating was a common practice and so was marital rape. Although the intensity has lessened to a great extent thanks to education and awareness through social media, it does exist and even in modern, urban society.

Now, while men had taken upon the role of a fascist monarch, the women imbibed the unwanted demureness that patriarchy bestowed on her. As a result, all the marital rapes and violence became a common thing. However, I liked to believe that girls and young women, who have had an urban upbringing, are independent and do not like to see men as the sole provider or the king in any relationship – that equality is the way of the world for today’s youth. I was literally shocked when I found young girls defending Kabir Singh, with even a meme going around saying, ‘If you want a boyfriend like Kabir Singh, you have to be like Preethi.’ Moreover, a Quora post ran a few days ago, asking if any Indian women would want to have a boyfriend like Kabir. Needless to say, one answer among two was YES.

The reason for this “yes” was simple – apparently every girl wants a boyfriend, who would be crazy for her, pamper her and won’t be able to live without her. While all these things are okay, one must acknowledge a fine line between love and obsession. Love commands respect and equality, whereas the other face of obsession is violence. Sadly, we Indian women have internalized marital violence and marital rapes so much that we mistake obsession and objectification as love, not ever wondering the emancipating side that love has to offer.

Are We Failing As A Community?

While watching numerous criticisms of the movie on social media, one thing that stuck me pretty hard is the fact if we are failing as a community. Comparisons with the protagonists in the ‘Gangs of Wasseypur’ kept coming up on a large scale, questioning if they did not perpetrate toxic masculinity. Yes, they did. However, the ending to those movies had a Shakespearean fall that showcased the futility of violence and toxicity in individuals. Despite saying ‘NO’ to films still objectifying women, it is indeed how ‘Kabir Singh’ has gone on to become one of the most successful movies of 2019 so far.

Recently, director Sandeep Reddy Vanga’s statement justifying violence as the truest essence of love left many in shudders. Although he later corrected his stance and said, “…in a true relationship, emotions can get raw and violent,” one cannot help but wonder if this emotion works both ways. What would have happened if Preethi would be in Kabir’s shoes? How would the mass favoring ‘Kabir Singh’ have behaved if Preethi would have marked Kabir as her territory, kissed him and caressed him on their first meet? Would Vanga have been brave enough to show the consequences then? The concerned audience is sometimes left wondering why still women are shown as the demure ones, surrendering self-respect to their “protagonist” college bully, falling for him and later becoming the embodiment of agony on being denied marriage to him. Are we still in the ’90s?

Although ‘Kabir Singh’ made it pretty big at the Box Office, it did numerous eyebrows and questions. It made us question yet again the basic questions of equality that innumerable youth across the world have been fighting for – the basic question of consent in any relationship. Consent is not something that arises only in case of casual sex. It is an important part of any romantic relationship – be it one between unmarried romantic partners or between married couples. The question of respect also deserves a stand here – after all, will there be equality and happiness in any relationship if that borders on violence and not on respect? Does rawness in any relationship implicate violence or the sheer joy of being their respective selves and sharing a life together? We wonder if Bollywood has an answer to this.