Chhichhore Movie Review : A Fun Watch For The Weekend Which Relies Heavily On Nostalgic Moments

Posted on September 6, 2019 by Srividya Vanamamalai 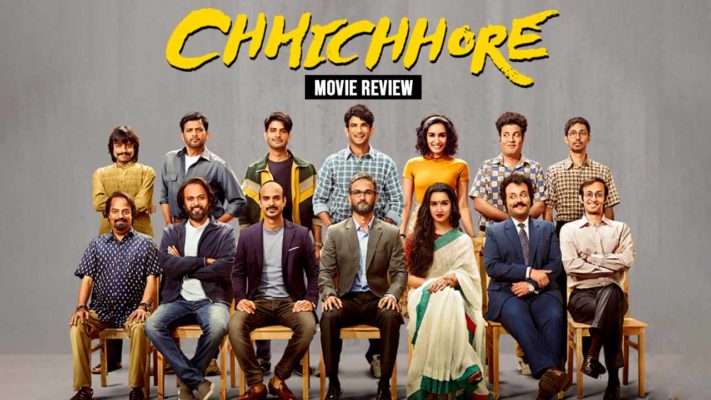 Chhichhore : The Nostalgic Dose of Laughter

Chhichhore is a film that jumps back and forth between the present millennial and the 90’s. The story primarily revolves around 7 students’ lives in the H4 hostel of a prestigious Engineering college in Mumbai and their reunion a decade and half later.

Chhichhore reminds us of the ‘Student Of The Year’ narrative technique where in the characters are forced into a reunion over a tragic incident. Anni (Sushant Singh Rajput) and Maya’s son decides to commit suicide and gravely injures himself, unable to face his parents due to his inadequate marks in a college entrance exam. During this life or death crisis, Sushant (Yes, Sushant is the name that pops in your head and not Anni once you walk out) decides to narrate his college life to his kid to improve his condition. Now this is where the director plays around with the different match cuts, in fact he overuses them so much so that, the brilliance of it, is lost in the process.

Spot On Depiction Of An Era Gone Past…

The director gets the production design and costumes spot on from the word go and it truly feels nostalgic and retro in style. Dialogues were gimmicky in the real time story whereas situation-ally funny and real in the flashback sequences. Personally, I enjoyed the flashback portion for its visual realism and situational comedy. It was disappointing to see that it did not carry on to the real time story as most of it felt forced, including the makeup and wigs. Come on, everybody lost their hairlines for the heck of it. It was creepy to look at their huge foreheads. Nitesh Tiwari has poured his heart out to express his campus life but it all seems to be over the surface and too light-hearted. The writers could have pushed the envelope in terms of seriousness and backstories.

The character of Sexa played by Varun Kumar is my takeaway and, Naveen Polishetty was a delight to watch. Tahir Raj Bhasin, the actor within him was hidden behind all those cigarettes he smoked. Prateik Babbar and Shraddha Kapoor were just hollow and poorly-written characters who hardly any scope to perform to their full potential.

The son-father duo seemed to share a great rapport and open mindedness but it comes across as flat and fake instead. The climax is beautifully written and except for Prateik Babbar’s huge character arc jump, everything falls well together, escaping one cliché after another. The film delivers a relevant message and is a laugh riot (and a bag of mixed emotions), almost.

Overall, Chhichhore is a fun watch for the weekend if you’re not looking for serious cinema.