25 Films Which Are Sure To Rule The Oscars Game This Time Around..! 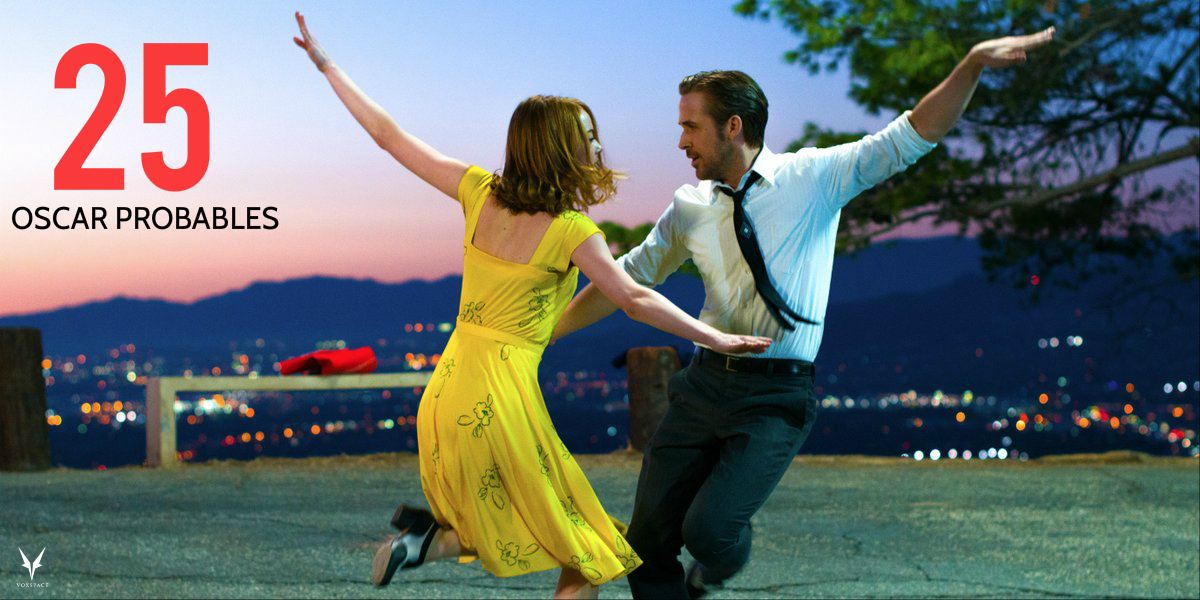 It might be hard to believe, but in just three weeks we’ll be back in the thick of an all-new awards season mere months after the #OscarsSoWhite controversy ignited a fire in Hollywood that’s still smouldering.  First up is the Venice film festival, where a number of potential awards contenders are poised to make their debuts, including a Jackie Kennedy biopic starring Natalie Portman and a romance featuring real-life couple Michael Fassbender and Alicia Vikander.

So what are the players we are looking at :

Among film-makers, Ang Lee is the Academy’s gold standard. The two-time Oscar winner (for Brokeback Mountain and Life of Pi) is back this fall with this adaptation of Ben Fountain’s book. It’s being billed as Lee’s most innovative project yet, thanks to his unprecedented decision to shoot the film at 120 frames per second, up from the normal 24. Early footage previewed in Las Vegas drew rave reviews for Lee’s bold approach.

As for the subject matter, the book was called the Catch-22 of the Iraq war. Told in flashbacks, it recounts a 19-year-old army private’s experience of the war as he and his squad embark on a victory tour. Newcomer Joe Alwyn heads the cast, which includes Kristen Stewart, Vin Diesel and Steve Martin.

Damien Chazelle rode his last film, Whiplash, from the Sundance film festival all the way to Oscar glory. His anticipated third film is poised to rocket him back into awards season, by attempting to resurrect the big screen musical with some help from Ryan Gosling and Emma Stone. The romance, about a jazz pianist (Gosling) who woos an aspiring actor (Stone) in sun-kissed Los Angeles, boasts a swoon-inducing first trailer that hints at something truly special. Adding to the buzz is its opening night slot at the Venice film festival, which in previous years went to a number of Oscar-winners including Birdman and Gravity.

The last (and first) time fashion designer Tom Ford took a detour into film-making, he surprised his naysayers to deliver A Single Man, an emotionally rich and formally ravishing drama that earned an Oscar nomination for its lead actor, Colin Firth. He’s now back, seven years later, with his anticipated second offering, Nocturnal Animals, based on Austin Wright’s acclaimed novel Tony and Susan, about an art gallery owner haunted by her ex-husband’s novel. The cast is among the best of the year: led by Jake Gyllenhaal, it also stars Amy Adams, Michael Shannon, Isla Fisher, Laura Linney and Armie Hammer.

Michael Keaton continues his quest for that elusive Oscar in this biopic of McDonald’s co-founder Ray Kroc. John Lee Hancock, who nabbed a surprise best picture nomination for The Blind Side in 2009, directs.

In the wake of #OscarsSoWhite, the latest drama from Belle film-maker Amma Asante seems ideally poised to stake a mark this season. The romance stars David Oyelowo as Seretse Khama, who in 1925 became king of Bechuanaland (then a British protectorate, now the republic of Botswana) aged four, and Rosamund Pike as Ruth Williams, the Londoner who married him despite considerable controversy at the highest political levels, both in apartheid South Africa and in the UK.

The Academy isn’t known for typically rewarding films about aliens – but if anyone can reverse that trend, it’s Denis Villeneuve, who’s overdue for a gong following Prisoners and Sicario. Helping his chances are Amy Adams and Jeremy Renner, who both star in this present-based thriller about a linguist expert (Adams) recruited by the military to determine whether aliens that have recently landed on Earth come in peace or are a threat. The film is said to be more cerebral than your average extraterrestrial blockbuster.

Ewan McGregor makes a bold leap into film-making with this adaptation of Philip Roth’s universally acclaimed 1997 novel about the disintegrating life of an apparently successful family man. Based on early buzz, he appears to have succeeded at Roth’s dense source material – and the trailer harks back the suburban dread that characterized American Beauty, a best picture winner.

Annette Bening looks to once again be in the running for her lead turn in the new film from Beginners writer/director Mike Mills. The four-time nominee – who has yet to win – leads a cast including Greta Gerwig and Elle Fanning. Bening plays a single mother raising her teenage son in a sprawling bohemian house during the 70s. Mills has a way with actors: Beginners netted a supporting actor Oscar for Christopher Plummer in 2010.

While the latest film from Martin Scorsese is unlikely to reach the commercial heights attained by The Wolf of Wall Street, the biggest hit of his career, it’s bound to win over the Academy. Scorsese’s epic adaptation of Shusaku Endo’s novel about two Jesuit Portuguese Catholic priests (Andrew Garfield and Adam Driver) facing persecution on a trip to Japan to find a priest (Liam Neeson) who has lost his faith, ranks as the most challenging project of the film-maker’s storied career. He’s been trying to complete his passion project for a rumored 23 years – and its road to the screen has been shadowed by tragedy: a construction worker was killed after scaffolding collapsed on set.

Ava DuVernay shot to the top of the documentary race as soon as the New York film festival revealed her first documentary, The 13th, as its opening night film, marking the first time a non-fiction film has been chosen to kick off the prestigious event. Former openers include The Social Network and Gone Girl. Her timely film tackles racial inequality in the US – making it sure to draw attention.

Don’t count out Jon Favreau’s popular and well-reviewed Rudyard Kipling adaptation “The Jungle Book” (Disney). Like Ang Lee’s “Life of Pi,” the family film could emerge as a strong contender with support from the crafts, although VFX is its strongest suit.

Few films this year boast more prestige than Denzel Washington’s third outing behind the camera. Adapted from August Wilson’s Pulitzer-winning play, Fences reunites Washington and Viola Davis together, after the pair won Tony awards for their performances in the Broadway production of the drama. While the source material is undoubtedly strong, it remains to be seen if Washington, whose last directorial efforts (The Great Debaters and Antwone Fisher) were just decent, can deliver a film worthy of the play.

Breaking out of the Cannes Film Festival in May was David Mackenzie’s modern western “Hell or High Water,” starring Jeff Bridges as a Texas marshall chasing bankrobber brothers Chris Pine and Ben Foster.

Three brilliant African-American women at NASA — Katherine Johnson (Taraji P. Henson), Dorothy Vaughan (Octavia Spencer) and Mary Jackson (Janelle Monáe) — serve as the brains behind one of the greatest operations in history: the launch of astronaut John Glenn (Glen Powell) into orbit, a stunning achievement that restored the nation’s confidence, turned around the Space Race and galvanized the world.

Starring Oscar heavyweights Nicole Kidman and Rooney Mara, Lion has the makings of a potential awards contender – bolstered by its inspirational and fact-based story about a young man adopted as a child who used Good Maps to track down the family he left in India. Dev Patel heads the cast, in his highest-profile role since Slumdog Millionaire. The question mark is its director, Garth Davis, who’s making his debut with the uplifting drama.

Peter Berg reunites with his Lone Survivor star Mark Wahlberg for this disaster film, based around the BP oil spill, considered of the largest accidental marine oil spills to date – and the worst man-made disaster in human history. Lone Survivor, while a hit with audiences, was ravaged by some critics who found it bone-crunching violence near-pornographic. Probably for the same reason, it failed to resonate with voters. Perhaps this eco-conscious thriller could do the trick?

This war drama – about Desmond T Doss, a real-life medic who served in the battle of Okinawa despite refusing to carry a weapon because of his Seventh-day Adventist beliefs, becoming the first conscientious objector to receive the medal of honor – screams Oscar. Potentially spoiling its chances at glory is the involvement of director Mel Gibson, who’s still one of Hollywood’s most controversial figures.

Manchester By The Sea :

The Lost City of Z :

Writer/director James Gray is a favorite among critics, but so far his films have failed to convince Academy members of his talent behind the lens. The Lost City of Z, which recently nabbed the closing night slot at the New York film festival, appears to be his biggest and most mainstream effort to date, by telling a true story about British military man (Charlie Hunnam) who embarks on a decades-long search for a lost city deep in the Amazon during the 1920s. But knowing Gray, his epic is probably anything but conventional.

Warren Beatty hasn’t directed a film since 1998’s political comedy Bulworth – and judging by the first trailer for Rules Don’t Apply, a period comedy set in Hollywood, he seems to have gotten a bit rusty. Whether the film, about a small town aspiring starlet (Lily Collins) who arrives in Hollywood under contract to star in a film for an eccentric billionaire (Beatty), is as messy as its scattershot preview is still up for debate. Beatty’s involvement, plus that of that new Han Solo, Alden Ehrenreich, lends hope that it’s better than it seems.

Disney’s Uganda-set fact-based drama about a young girl who trains to become a world chess champion seems more Million Dollar Arm than Oscar player, but we’d be overjoyed for director Mira Nair (Monsoon Wedding) to prove us wrong. Lupita Nyong’o stars as the prodigy’s mother in a rare live action role for the actor (we were only allowed to hear her in Star Wars: The Force Awakens and The Jungle Book).

Antoine Fuqua’s remake is by no mean standard awards fodder – its trailer pitches it as a robustly commercial Hollywood shoot ’em up, starring everyone’s favorite heartthrob Chris Pratt. But the film’s upcoming festival appearances are telling: on top of being selected to open the Toronto international film festival, it’s also closing Venice. Perhaps there’s more to it than meets the eye.

Clint Eastwood enjoyed great awards success with his last flag-waving drama, American Sniper, but his recent comments defending Donald Trump could result in his follow-up from even entering the arena. Shame, because it sounds right up the Academy’s alley: Tom Hanks plays Chelsey Sullenberger, the airplane captain responsible for the “Miracle on the Hudson”, who endured an ensuing investigation that threatened to destroy his reputation.

After her husband’s assassination, Jackie Kennedy’s (Natalie Portman) world is completely shattered. Traumatized and reeling with grief, over the course of the next week she must confront the unimaginable: consoling their two young children, vacating the home she painstakingly restored, and planning her husband’s funeral. Jackie quickly realizes that the next seven days will determine how history will define her husband’s legacy – and how she herself will be remembered.

Interracial couple Richard and Mildred Loving fell in love and were married in 1958. They grew up in Central Point, a small town in Virginia that was more integrated than surrounding areas in the American South. Yet it was the state of Virginia, where they were making their home and starting a family, that first jailed and then banished them. Richard and Mildred relocated with their children to the inner city of Washington, D.C., but the family ultimately tries to find a way back to Virginia.

After his wife leaves him, David is transported to a hotel where he has to find a partner in 45 days, failing which he will be converted into an animal of his liking.