Vox In A Box : The Origin Story Of VoxSpace With The Ideas And The Ideologies Behind It 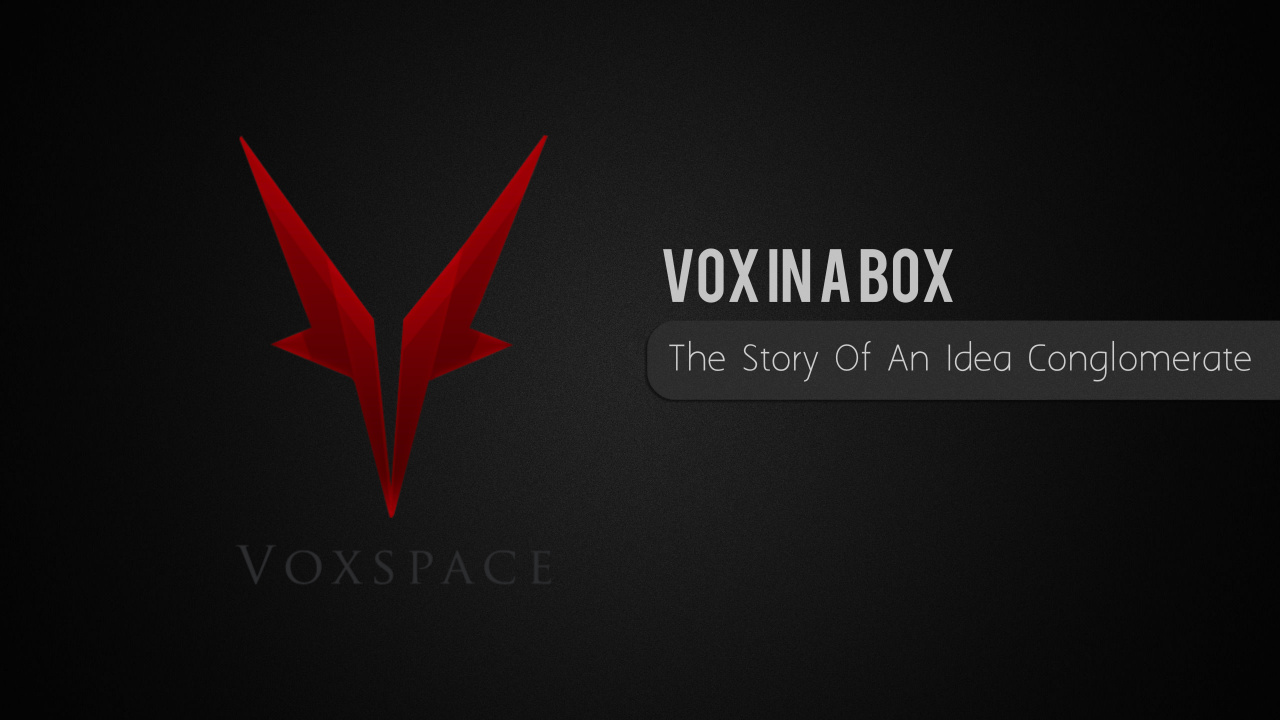 Vox In A Box- Happy Anniversary!

A year ago I was a directionless writer, who wanted to structure thoughts and put them down. I had been passionate about writing but I needed an open platform that would treat articles in a presentable and respectable manner, and then Vox became my space of leisure, where reading and writing made debatable sense. Writers for Vox have thoughts they want to share to make an impression on minds and reach out to as many readers as they can. Here are few intriguing things about Vox shared by Siddharth Naidu (Founder of VoxSpace):

It Is Called ‘VoxSpace’ Because:

Traditionally Vox stands to define the structure of voices of people. In that context, VoxSpace was always intended to be a people driven thought conglomerate, with true and honest stories, put forward. To be honest, the term Vox had stuck with us for a long time, even before actually finalising it. (Perhaps, VidyaVox had something to do with it ☺ ). But once we researched more about the term Vox, we found that it was fitting our ideologies to the last beat. We were after all looking to bring out a platform, which could carry the responsibility of traditional human stories, without being corrupted or biased towards any ulterior factor. Hence, Vox, as the definition goes, is the Voice of People. People whose stories are buried even while they make wonders. We tap into stories which resonate over time and space, making the reader think about what she or he has just read. Bringing in the concept of publishing unheard stories of strength, courage, art, passion and vision. That is Vox in one package

The Idea Behind Concept – VoxSpace

The idea came about as any other cause would, as a result of a rebellious thought of the present situation of scandalous stories and sensational suck ups. To elaborate further, My team and I were thoroughly fed up of the existing web portals, that sold mockery in the name of listicles, (10 things you should know about Prabhas’s Left Bicep and celebrity/film/issue reverence. When we say reverence, the idea of VoxSpace was to go beyond any “strings” that reached out to us to promote them on Vox, but we do not urge to give into popularity that seemed empty and dry. Most of the websites you see today in your newsfeed, are conveniently opinionated when you closely observe.

National websites fodder of articles go like this – Pick a scandal (say, the way XYZ Actress talks) – Have someone tweet about – Then write about ideology clash – take sides – Write an opinion about it. That’s a vicious circle of content generation. When it comes to Regional websites – Well aren’t we just suckers for movies, even though more than half of them are hare-brained. Every movie spawns at least 10 articles on it, of random this and that.

In this age of awareness, most of the websites we come across have made it their life ambition to dumb down their audience and readers. They are concerned with the likes and shares they get. That results in revenue generation and pays for the party. With all due respect to them, that’s not content generation for people. That’s just feeding the Search Engine. So, VoxSpace was always meant to be beyond the entrapping trinity of – Sensationalism, Revenue Oriented Articles, and favour driven suck ups.

In that context, VoxSpace stands for stories which mean something, giving value to a reader’s intellect and more importantly value to their time. Also, we write when we want and how we want. At the end of the day, it’s the passion to bring out unheard, well-researched stories drive us, and nothing else.

In The Love For Writing – The Minds Behind Articles

VoxSpace is a passion driven community and is never under the pressure to generate articles as we believe that stories are better told by people who are passionate to write about things which move, inspire and influence them. When you have a right motive and push, nothing else matters. Unlike other web platforms, which are run by investors or people who can’t write a word, here we are a team of writers who humbly write their thoughts fearlessly.

As people say, Lack of Investment is not a huge factor for us to not expand and excel. We think the lack of freedom cuts down our wings which we as free spirited people cannot allow happening. We believe that “An investment requires Returns. A passion requires a stage and We are that Stage.”

Apart from these regulars, we have been grateful to receive guest inputs from Sravanthi Talluri (Founder Of Write Club Hyderabad), Drishti Nagda (Founder Of InkScapeCo Hyderabad), Akshay Kokala (Manager, Lamakaan), Hiranmayee (Founder of People For Dialogue), Hriday Ranjan (The wittiest writer of Hyderabad). To them, we bow down for their wonderful works.

We all believe in the Hobbit-saying “The More the Merrier ho.!”.

Recap Of Vox’s Journey: As A Website Striving To Promote Talent, Art and Artists

“Vox Space completes its one year this week. When we look back, the website was started in a small room, with people with empty pockets, and a scrappy little laptop which used to shut down on its own” said Siddharth and it made me smile. A small precious idea to reach out to people had gone a long way I thought.

To us registering VoxSpace was itself a huge task and once we took it up, we knew all that we had to do to overcome every factor working against us. Patience was the key. And that’s what has defined the core of the platform. We now have achieved greater word of mouth publicity than we would have ever thought. People in the city of Hyderabad, know us by name. “Ironically, not many know that VoxSpace is my work platform. So, it is endearing to see when people refer to the website in casual talk.” Says Siddharth. That counts for everything and feels like a prevalent pleasant perfume. This he said, was one goal achieved.

Secondly, today we are respected across the city for the articles we bring out and receive requests from across the nation for coverage. However, as cruel as it may seem, we tend to filter out most of them. The reason is simple – the stories which don’t serve any purpose is of no use. We work towards appreciating and encouraging writers Hence, for anyone who approaches us, we never send them away empty handed. We refer them to other sites, who might be interested in similar articles. That has added to our goodwill.

Thirdly, we have the fastest reach rate on Facebook, touching 85 Million at one point of time. We do realise that our Facebook page is all over the place, but our idea as to maintaining the page was to share content on it which was either entertaining or thought to provoke. We like something, we share it and make it accessible to views/readers. And perhaps that worked for us in building an audience from the scratch. Doing good work counts, but we still got to be smart about it right? We saw many a website fail to thrive because they were too rigid when they came to promote their social media accounts. That factor had weighed into our thoughts.

Fourth, we have artists, bands, collectives, talents across the nation looking at us, as a platform that truly understands them, like It takes one to know one, they are aware that they are being covered in a whole arch and not being used just as a clickbait title. This is the reputation in a gist. And perhaps that is what we want to achieve in the future as well, albeit at a global level. We want to be a beacon of comprehensively solid stories worldwide. To artists across the globe, our appeal to you is only this “You are not alone. You have a talent that the world needs to see Come right here, as we assure that it does.’’

As we said, since we are a society of freethinkers, flexibility and freedom tend to result in gaping areas of no articles being published. Although that doesn’t affect us in any way, it is something that needs streamlining in future. We do want to be regular while bringing out stories and provide stories that are normal, to achieve this we need to find a tender middle path. We are brainstorming about it, and plan to come out with ideas and implement them shortly. (Any suggestions are most welcome).

Our tasks are lined up, some of which are to gain a decent Instagram and Google Plus following. Another being an initiative to increase our pool of writers to bring the best of words and stories to the world.

How Do You Plan To Increase Your Reach?

It might surprise many when we say this – We don’t have a plan really. We are just the wild child of the internet, doing what we do when we do, and in the way, we wish to do -that defines us. Freedom is our biggest strength, and therefore it has its own cost. So, by bringing in more number of writers, who have definitive and impressive voices, we are planning to reach out to an audience which cares about what they are reading.

As far as the readership reach goes, we have a solid growth rate already present on Facebook. As we pick up new stories, more people get in contact, higher the reach. That’s how we generically increase the reach. There’s no point in spending thousands on Facebook page/article boosting. If an article needs to be read, it will be read. As we always maintain, people driven growth is what we are aiming for, and for that, we need to make the voices heard. Simple.

To rejuvenate the habit of reading well-researched articles in an age of memes, scandals, revenge tweets, and snap chat cartoons. We are here to bring a change, nay, reset the button on stupidity, and bring back the joy of reading. Remember, how we used to get a high reading a Sunday newspaper, with well thought out articles in it, while sipping on a warm cup of coffee. Yeah. To recreate that feeling, in the web platform is all we are looking at. And well, if there’s a motto, it’s simple. Who’s stopping you?