[VoxSpace Selects] Offence, Irony and Beyond : A Meat Eating Ganesha And The Jawed Habib Fiasco 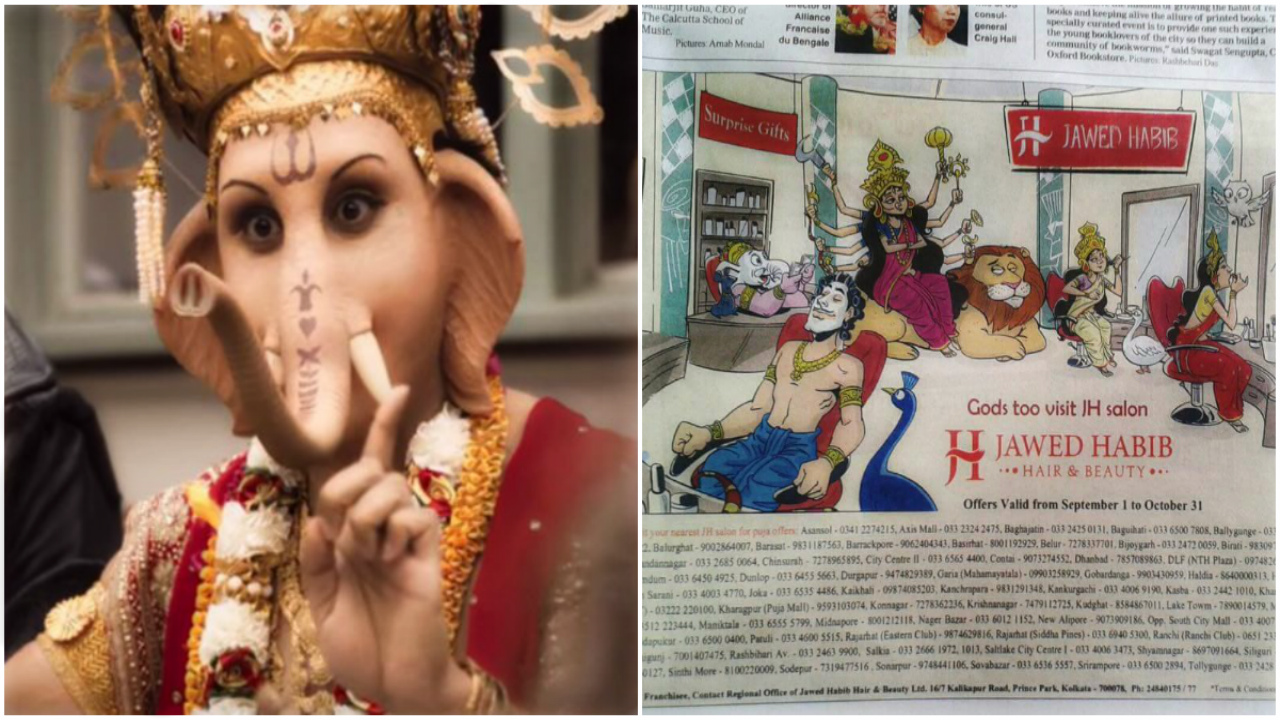 The Congregation of Gods By Meat And Livestock Australia

Imagine a congregation of gods of all religions together on table for lunch where Zeus sends heart messages to Aphrodite, Moses instead of seas, separate peas on a plate, Buddha in his laughing avatar taking a dig at Ganesha and his elephant head, L. Ron Hubbard complaining of missing a lunch date with Tom Cruise to attend the lunch, Jesus performing a reverse miracle and turning Aphrodite’s wine into water because she is a designated driver and Muhammad not showing up, because…you know why?

Sounds interesting? Well, it is. This ad that has been released by an organisation named MLA (Meat and Livestock Australia) to promote lamb as the choice of meat as it is not forbidden by any religion. In an atmosphere where dietary choices have become a political and religious topic, this ad deserves to be appreciated for their sensitive, creative and superbly humorous approach.

But if you are from the sub-continent, you have by now either started typing hate comments on social media or praying for the safety of the organisation that made this ad. How dare they approach religion in a light hearted manner? Because religion can be only used to kill and spread violence and not a sensible message, right?

Offence Is The Best Defence Yes?

As expected, the professional offence takers of Indian origin has cried about their religious sentiments being hurt as the ad hinted at (not showed) Ganesha consuming meat. Tweets were written, hate comments typed and mess of the situation was expertly made because quite frankly, we excel at it. Our religious sentiments are hurt more often than a smitten teenager’s romantic feelings. Forget the notion of freedom of expression, we have even lost our sense of humour. Maybe people like Kapil Sharma are to be partly blamed for that, but that’s a topic for another day.

Coming back to this ad, it is extremely saddening to witness the irony of the situation. An effort to find a solution to a problem that threatens communal harmony lead to communal tension. It is also extremely disturbing to notice that the followers of other religions took it in a stride and it was only us who could not get the humour.

The Legendary Hairdresser Receives Flak For Inappropriate Depiction of Goddesses

Come to think of it, it is hardly an isolated event. In another recent controversy, legendary hairdresser Jawed Habib had to apologise on social media as one his franchises in Kolkata came out with the print ad that showed Maa Durga, Ganesha, Laxmi, Saraswati and Karthik chilling in the salons in the spirit of the upcoming Durga Puja celebrations in Kolkata. Now if you are a Bengali, this would actually trigger memories of Anondomela Durga Puja edition covers that depicted the deities like normal human beings. In fact, the whole concept of Durga Puja gives a humanising twist to Maa Durga whose vacation to his father’s house with her children is celebrated as Durga Puja.

Rubbish ad by Jawed Habib. I dare him to do such an ad on his Prophet. pic.twitter.com/XxpZQ7pZiu

But who cares about social, religious and cultural accuracies when you have the serious job of taking offence on your to-do list. The franchise was targetted and threatened to an extent that led to the apology on social media by Jawed Habib.

What’s shocking in this case it was not the people of Kolkata, where the ad was published, took offence, but people from other parts of the country found it disrespectful. As if taking offence about things around them wasn’t challenging enough, we have now started taking offence on behalf of others as well.

The fact that we are a republic of offended people is no secret, but instances like these re-affirms the serious decay of sensibility we are plagued by.

Religion might not be a topic to crack jokes on, but if a choice is to be made between using religion to spread hatred and killing people and using religion to make people laugh, my understanding of my religion makes me settle for the latter.