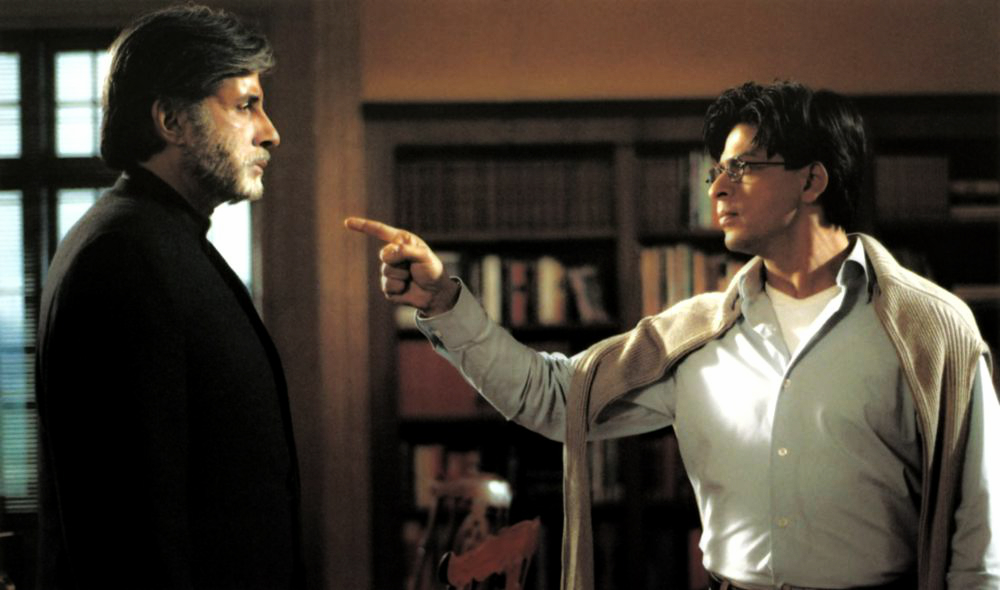 Bollywood has traditionally been obsessed with the concept of righteous heroes pitted against the monstrous villains. For the hero to emerge as the good guy the villain has always received the hatred and the spite of devoted cine-goers. However, there are several instances where the villain was actually not all that bad and in some rare cases, in fact, made more sense than what the hero was doing. Here are a few films, the villains of which, do not deserve the spite of the audience.

Filmfare Award for Best Scene of The Year - 2000 - Mohabbatein

It might be difficult to look past a glass donning, violin-wielding Shah Rukh Khan’s charm in the movie, but if you manage to achieve the feat you will realize that Narayan Shankar was not the ‘Pyaar Ka Dushman‘ grumpy, old dude. He is just a strict principle who wanted kids to focus on their studies and lead a disciplined life. Yes, one might argue that he goes overboard with his disciplinary actions, but then when you have students like Uday Chopra in your school, can you be blamed for being extra cautious?

To be honest, Saif’s character was not portrayed in an entirely negative light, but still, you root for the flamboyant Maddie, who actually does pretty shady stuff to get close to a girl. In fact, it is surprising that Rina’s character does not launch a police complaint against Maddy. But then again, we are talking about Bollywood’s common problem of confusing stalking and fraud with romantic determination.

Yes, Sanju was adorable in the movie and you root for him, even though he is a gangster, against Dr Asthana who was actually a respected doctor and a teacher who did not like a crooked gangster and his buffoonery in a serious atmosphere of medical studies. The guy literally believed that his hug had healing properties. Show me one doctor who would not be pissed at that?

No, I am not going to argue if Aamir’s character was right or wrong in the movie, that one is reserved for another day. However, one thing we all missed was how the Indian wrestling team coach Pramod Kadam was shown in a negative light. Poor thing was just going with the tried and tested methods and trying to train Geeta in ways he thought would be best for her. Maybe locking Aamir in a room to prevent him from watching Geeta’s match was a bit of a stretch, but from his perspective, Aamir was just an egoistic and overly interfering father of the girl, who he was trying to coach to the best of his abilities.

It was again SRK’s charm who was the culprit and made us root against people who actually made more sense than him. Nobody can disagree that Raj did not fit the vision of what a father would look for in his daughter’s husband. He was reckless and frankly quite ill-mannered and also had a wannabe cool dad. Can’t really blame Amrish Puri for not falling for his pigeon seducing skills. Also, the less we talk about Kuljeet’s character the better it is. Poor thing was just happy to get married to the girl his parents chose for him and got treated in a really shitty way by the girl’s NRI boyfriend.

Another Shah Rukh entry on the list, apart from the shameful cultural stereotyping, you would have probably hated, Thangaballi for beating the shit out of Shah Rukh. In his defence, would you not do the same thing if somebody tries to take Deepika Padukone away for you and you literally can give Hulk a competition? I know I would.

This one is probably a little controversial, but Vijay in Queen is not quite the insensitive monster that all of us are convinced he was. Yes, it is pretty awful to cancel your wedding after you wooed the girl for ages that too on the day of the wedding, but cut the guy some slack. He is a millennial after all and having cold feet right before your wedding is not exactly a heinous quality. He was misogynistic in his approach, yes, but he was just another young dude who was scared at the prospect of a lifelong commitment, something that most guys of his age can definitely relate to.

You see, neither all heroes are Salman Khan in a Sooraj Barjatya film nor are all villains a direct descendant of Dr Dang or Mogambo. Next time you catch these movies, try to bear the points in mind and maybe you will be a little kinder to these misunderstood villains.