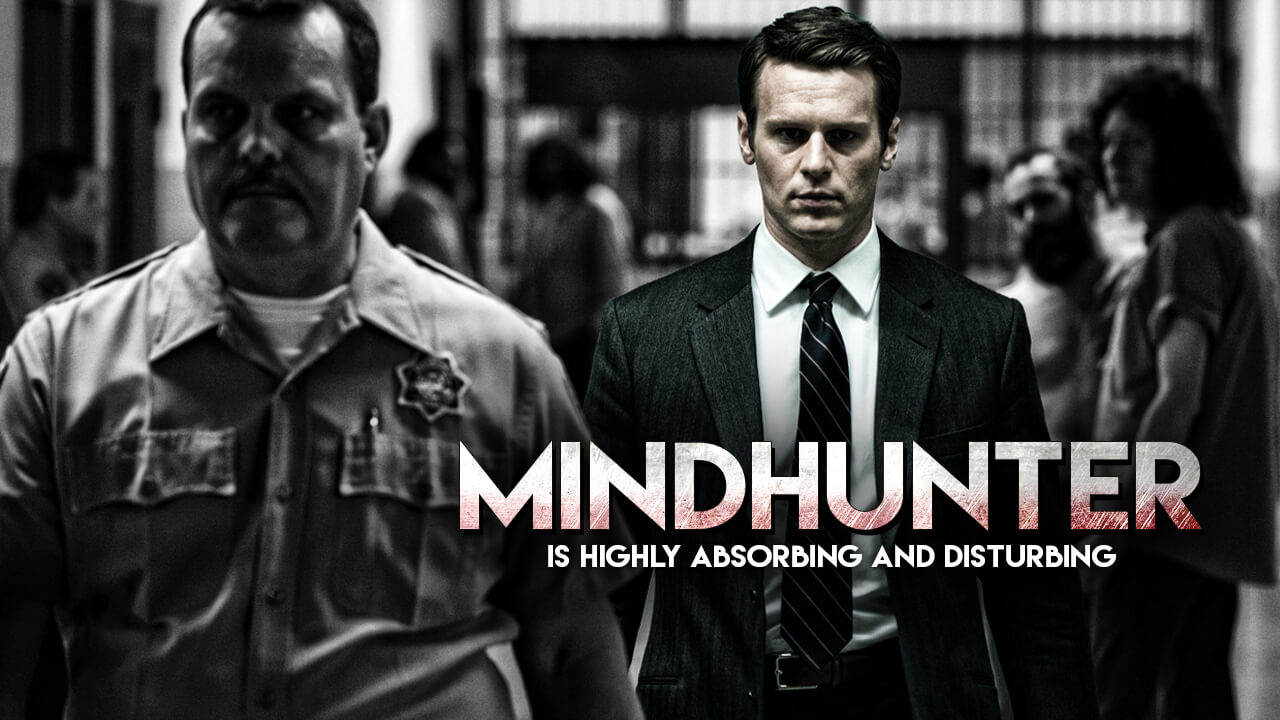 The series plunging into the minds of serial killers is always an invitation to the insanity. The solemn madness, simmering tension, and palpable darkness within the darkest corners of the mind tend to describe MindHunter. Acclaimed director, David Fincher, brings out the story of serial killers, through documented interviews, and offers an insight into the crime and the criminal.

MindHunter unravels like a bundle of barbwires, sturdily and shockingly, as the viewers are cajoled into normalising the intensity of crime. Which in itself is the way every criminal purposefully thinks like. The series starts on the shoulders of Agent Ford (Jonathan Groff) and his colleague Bill Tench (Holt McCallany), who in late 70’s take up the routine of investigating serial killers. Adapted from Mark Olshaker and John E. Douglas’ book, Mind Hunter: Inside The FBI’s Elite Serial Crime Unit, and run by The Road screenwriter Joe Penhall, the series is suffused with Fincher beyond just the direction. Fincher is up on board to be the executive producer. Let us remind you that any series kicked off by David Fincher in the past, has met with resonating success. Coming to mind are two immensely popular series, House Of Cards and House MD, which got just the right push in making history on network television.

Set in 1979, it finds the FBI only concerned with putting bad guys behind bars, but Agent Ford and Bill Tench, the intellectually curious duo are convinced that, by actually talking to the nation’s most deranged serial killers, they can better understand them, solve more cases and maybe even prevent future murders.

For an example of darkness seething under the skin of this series, we will need to explain just one particular case which disturbs even the hardcore gore seeker. In a scene where Agents Ford and Bill Tench handpick a serial killer, by name Holden, the creepiness fills the air. The genius of David Fincher in portraying the spatial gore and violence within the words reminds one of his movie, Zodiac. Coming back to the scene, as the Agents try to sincerely dive into the psyche of Holden, we are introduced to his radical, twisted, and appalling train of thoughts. This is also where he goes on to explain why, how and where, he had “sex with the trachea of his mother’s severed head”. Mind you, that is just the beginning of an interrogation, and also of the series of interrogations which are to come as we progress into deeper abysses of violent minds.

The trick, however, that MindHunter manages to do, with the series is that it leaves enough gaps within the conversations. Most of the conversations and interrogations are managed with brilliantly placed pauses and silences, which allow you to churn up the exact story. Thus, in bringing the viewer to participate in the conversation, Mindhunter makes the experience haunting as hell.

After watching the four episodes, made available for preview purposes, I had a lingering thought about the show. Yes, it reminds anyone of what True Detective could’ve been if it were more violent and had David Fincher headed it. Yes, it plays as an eerie choir inside your mind and disturbs your centre of peace for a long time. But what makes it truly stand out is a simple thought. MindHunter is a series based on true crimes. Charles Mason, Holden, John Wayne Gacy, Edmund Kemper and more. In the very beginning of the series, we are introduced to Edmund Kemper, who infamously murdered his Grandparents, Mother and several other women, before handing himself over to the police. MindHunter picks these convicts and tries to understand their psyche through its protagonists. And thus, starts a ride, aboard which you dare not blink an eye, even for a second.

The acting prowess rests majorly on the criminals on display. Edmund Kemper, for example, is played with a certain level of disturbing stoicism, and cringing slow temper. With enough tease about the Charles Mason case, which will be picked up in the episodes to come, as Bill Tench says in the series, “Keep your Gut feeling to yourself. Nobody ain’t got a shit to give about that. Enjoy the ride, son”.