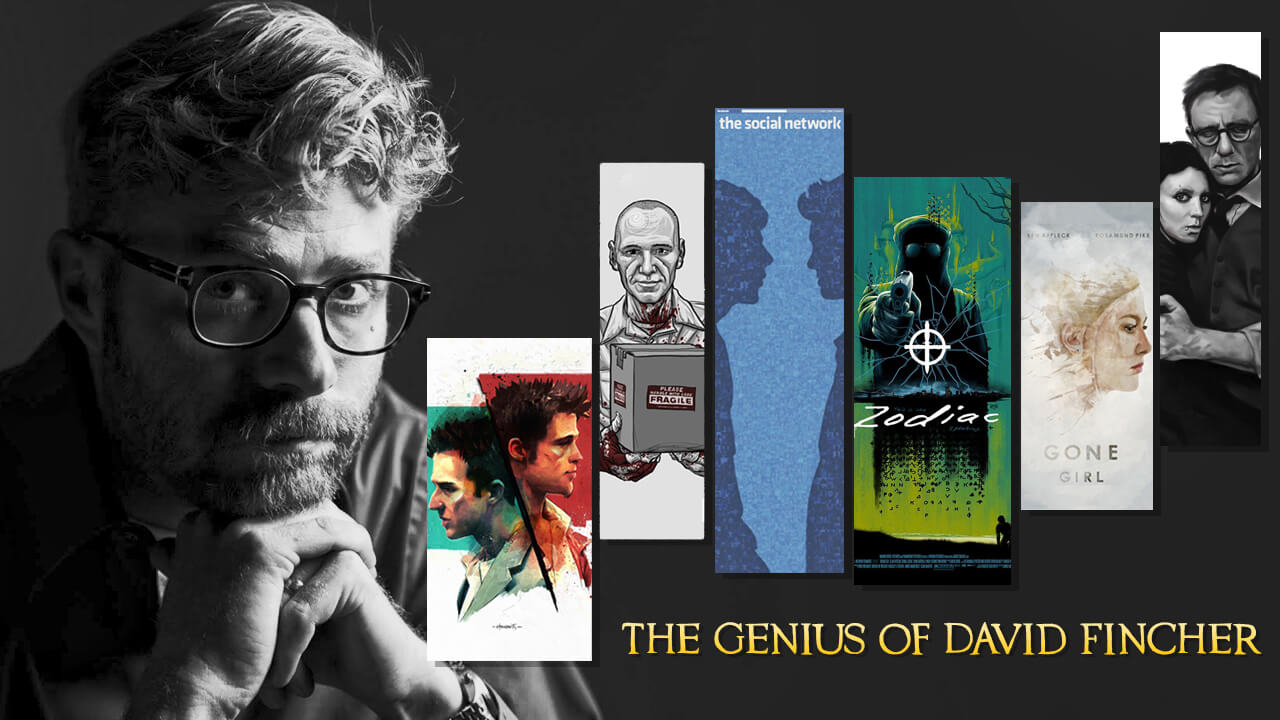 After watching around 4 episodes of Mindhunter, when I got up from my bed to fetch some water I got this weird feeling that someone was following me, not like in horror movies but like literally following me. I then resumed watching the series, which is when I found out about this very fixed pattern in which David Fincher pictures his characters.

Me being myself ended up digging all of my favourite works of Fincher and started re-watching them and to my surprise, it was consistent in all of them.

The works of many directors can be specifically told apart based on the one thing they tend to focus more on or the common thing they’ve known for in their films. Like Stanley Kubrick is known for his everlasting background scores, Edgar Wright for his finesse with editing and Christopher Nolan for the complexity of his films. Every director leaves traits of himself on the work he/she does. David Fincher, in particular, might not be known for bringing out mindfuck movies, but what else would you call movies or TV shows where you’d more often say ‘oh fuck ‘ while watching. I’d definitely call them mindfuck , the reason I said bringing mindfuck narratives to life is because despite being one of the geniuses right now in business David Fincher isn’t a screenwriter he doesn’t write the stories he narrates, and that makes it, even more, harder as you, as a maker would’ve to get into writers shoes first to do that with that much success and perfection.

The Voyeuristic Journey Of A Work Ft David Fincher

The Conversations And Information Processing

A lot of people think the directors are distinguished on how they shoot big setups, the crazy ones the visual grandeurs and yeah these are the shots that get copied. But sooner or later it all boils down to scenes like this -- two people sitting around a table and talking, the least cinematic thing there is. Scenes like these tell us more about the director than others. And David Fincher, he builds his narratives around these conversations. For Fincher, these conversations are as important as the scene of Battle Of Bastards Of Game Of Thrones. Fincher cares about information, unlike many filmmakers who try to avoid acquisitions. He delves on those and by introducing audience with new information he makes those moments formidable.

In his world drama happens when a characters hears new piece of information, how does it fit with everything they already know and how do they react when they listen to a little more truth.

The Perfect Of Fusion Of StoryTelling Through Mechanical Lens

So how does he bring such complex narratives with much more mindfuckingness to us? So before knowing what he does right, let’s first get to know what he doesn’t or opts not to do while filming a film.

If you’ve seen David Fincher movies you would know this, that Fincher is purely a storyteller and his command over cinematography just pulls us into the narrative and his genius comes from the rapport he shares with his cameras and his cinematography team. Which tells us why he never changes his camera crew and his cinematographers Jeff Cronenweth & Darius Khudji grew old with him. But all his expertise and craftiness aside here’s something you’ll find very rarely in Fincher’s work or in simple words what does David Fincher not do.

For one thing, handheld. Fincher is a locked down put it on a tripod filmmaker. He hates handheld and does it maybe once per film. The Girl With The Dragon Tattoo has barely two scenes, while Zodiac has one and Social Network has only one. Again these are the ones you can look and say that are handheld. Seven has the most handheld shots of any Fincher films. But even when he uses it he uses them to specifically moderate what the character’s going through, he makes sure that we observe that he’s using a handheld shot.

Another major thing that fincher avoids is the sense of a human being operating a camera. Sometimes you can’t tell wether a shot was human controlled , motion controlled or CGI the final effect is ominous.

Nothing Too Extreme -- That’s Not David Fincher At All

He also doesn’t cut to extreme close-ups or close-ups for that matter until he needs to. Even though he’s known for his close-ups he doesn’t really cut in, unless there’s need for it.

Every time he suddenly cuts into close-ups we know it’s truly important if he’s showing us this person this close. Like in House of Cards try and notice this next time, the close-ups are only used when Kevin Spacey is looking into the camera and talking to us or when he’s making his move and threatening people. And the more he’s directed the less often he’s using close-ups, you wouldn’t see much of close-ups in Mindhunter.

And lastly, he never moves the camera if he doesn’t have to. If he could help it, he’d not move the camera at all and instead make sure the whole scene revolves around or near it. He tries and does the montages in lesser shots.

“Shots” and not “takes” -- Fincher is so much determined in grasping the minutest of details in those single shots that he has this reputation of taking 80 -- 90 takes a day unless he’s satisfied which is why many movie buffs call him perfectionist. So consider all these restrictions he gives himself. No handheld , no human operating , no unnecessary camera moves, no unmotivated close-ups.

A Genius At Bringing A Narrative To Life

Well, unlike many other directors, David Fincher being David Fincher brings a hell lot of difference in filmography just by simple camera movements. Essentially, what he tries to do is have the camera exactly match the movements of the moving character or the character he wants to show us about, in the frame.

When the character stops the camera stops and starts again when the person starts, it tilts when he rises up and it pans around when he/ she stretch back, the matching movement here isn’t just close, its simply perfect. The movement would definitely involve a lot of time rehearsal with the actors to get it right.

It takes extreme patience and a great camera operator to mimic the exact same moves as the actor and even more difficult for the actor to mechanically move his body parts around with sync. And it happens in almost every scene and whether it registers or not, the effect starts to accumulate, which is the reason why we feel followed just after watching his movies. These little things he does just push us into delving into his narrative.

The Intricate Details Of Every Character

David Fincher is obsessed with behaviour. He knows that the way a person moves is a key part of who they are or how are they feeling at that certain point.

He knows that if a person is running and if the camera follows him exactly, it might bring to the audience the feeling of running with him. He knows that the agony of the character will reflect in the speed with which he lurches forward to express himself. He knows that fear can express itself in exactly how slowly someone stands up.

Emotions express themselves physically, what Fincher does is try and create these ‘oh fuck’ moments by getting us emotionally attached to the character by physically apprehending the movements of the character to that of how he’s feeling. He humanises the character, that leads us to think that we knew that character for a very long time and he succeeds to establish an emotional bridge between the screen and the audience.

Jake gyllenhaal acting at its peak

You would be surprised to know that a film like The Social Network has more VFX shots than Godzilla. That’s because Fincher’s true trademark is deception.

Fincher has always been on the bleeding edge of technology, and along with being a master with his cameras, he has also deeply immersed himself in the visual effects world his entire career. Because of which he knows exactly when and how to use an effect effectively. Remember the opening sequence of fight club where the whole map is shown in like 30 secs. Now without CG, that setup would’ve cost a fortune. But still, we wouldn’t have known the location and distance as accurately; as Fincher uses CG as his second nature, which would help him leave no tracks for people to find a loophole.

He likes to let you know exactly where you are in a scene, which can’t be possible with the cameras; it’s almost like virtual reality.

In fact, instead of creating every other set piece of zodiac suitable for 1960’s timeline he shot nearly every exterior scene in Zodiac under the green mat. He uses CG to bring depth to the storytelling, like composing virtual camera movement or showing the construction of some iconic structures in Zodiac. The essence of all the visual effects in Fincher’s films is that they’re almost never obvious. You would be surprised to hear that most of the blood used in Zodiac is digital blood.  As I said, he’s a master of CG. Fincher also utilizes CG in moments that would otherwise be difficult to recreate over several takes. It might look like he’s just doing it for covering up for the budget, but his films are about detail, his characters are investigators and detectives and obsessive’s and those traits are all reflecting in the filmmaking. They’re not there to be recognized, they’re not there to impress, they’re there to immerse.

Creation And ReCreation Of David Fincher

He knows exactly how to frame the character for a particular emotion or when he’s about to reveal any information. He dissects verbal conversations into visual languages which makes him a master of these simple person to person talks, sitting around a table and gives him an edge to build narratives around those scenes.

For example, re-watch any significant conversations in his films and observe. Fincher applies this simple rule of his where he closes in more as the conversation keeps going thicker until the character reveals the information which would bring a plot twist to the narrative. By doing this, Fincher is making us, without our own knowledge, take interest in the conversation. Fincher expresses himself more in the finest details, you can actually watch “Se7en” and see the progression of the relationship between Brad Pitt and Morgan Freeman, in any shot that has the two of them together, ending with the climax scene. ‘That’ is good directing.

At the same time, it’s great to watch someone who’s good at their job, someone who can show how the relationship changes with a single cut. Fincher doesn’t tell us mindblowing stories with great set pieces but he takes us inside the simplest of stories and tells them with perfect timing, which makes them mindfuck movies.

Even if you don’t like Fincher, his is some of the best craft in directing right now and it is absolutely worth studying. The more you watch Fincher, the more deeper you delve into its narrative, binge watch all his work and you’re a complete different person for atleast a week.