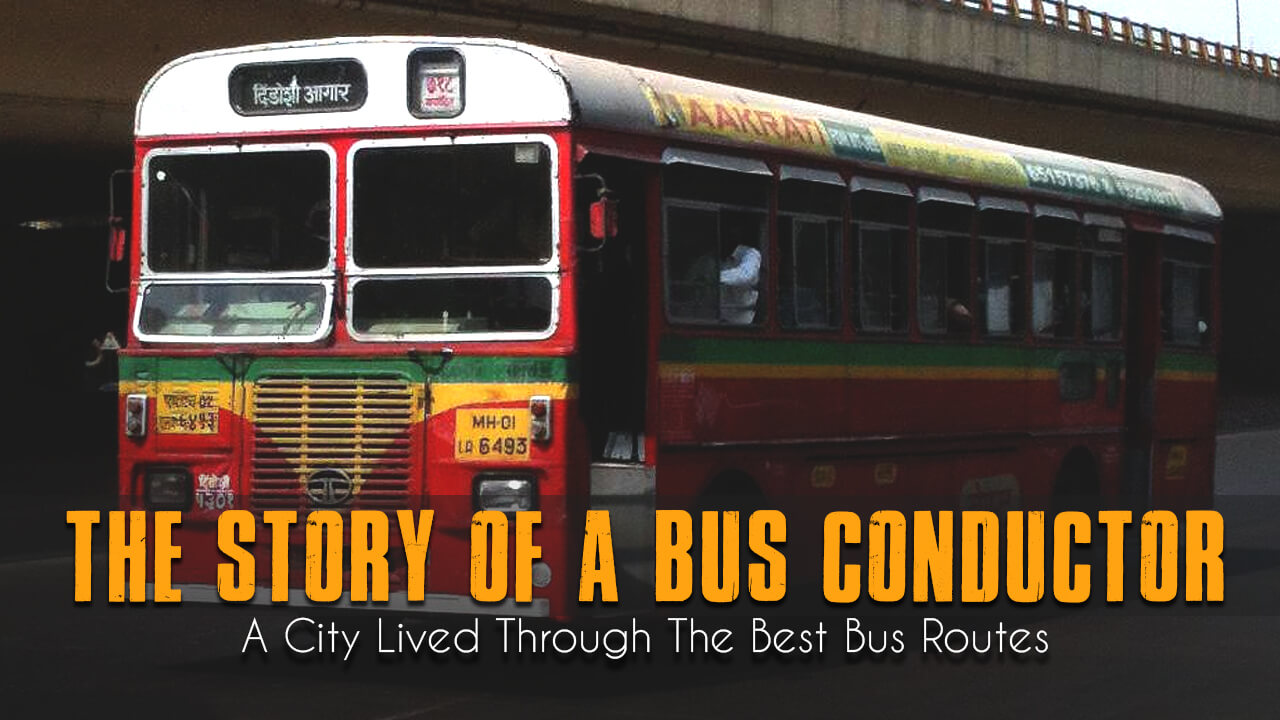 Chapter One: The Day Begins With A Uniform And Optimism

Every day, 4500 BEST buses run across the length and breadth of Mumbai, ferrying 4.8 million passengers over 365 routes. The bus drivers and conductors who make all this possible can be easily spotted everywhere in the city. But, are these employees victims of being stereotyped rude and arrogant or have they seriously lived up to their acronym?

A little away from the crowd, outside Mumbai’s Andheri railway station, in the setting sun of the last day of the year, stood Kishore Thakur, dressed in his olive green coloured uniform, now with his shoulder bag and shirt tucked out, after his 9-hour shift.

Thakur, now 51, has been a bus conductor since 17 years. He used to live with his wife and children in Satara, a district in northern Maharashtra, but, was able to create a living for them in Mumbai only 9 years ago. Being a farmer, in the first part of his life, Thakur hates to recall how bad the system gets in small towns. For what is crucial, the bus conductors earn a fair wage of Rs. 11000 a month in Mumbai. Run by the Brihanmumbai Electric Supply and Transport Undertaking, they cherish the job security and earn a raise of 7% every year.

This morning, as on most days, Thakur started at 6.30 AM, when he left his one-room kitchen apartment in Nahur and reported at the Vikhroli Depot to begin his last day of the journey on the bus 392. Bus conductor for BEST buses are put on the same route for 4 months and then, shifted to another.

“1 October Se Naya Route Milega (Will get a new route from 1st October).”

Thakur signs his duty chart, greets his fellow conductors and drivers, and begins ringing the bell. Thus, signalling the departure of the bus from the Depot. Travelling all the way through central suburbs of Mumbai via his favourite area Powai, as Thakur calls it ‘bade logon ki basti.’ In approximately 1.25 hours, the bus reaches Andheri station at 7.45 AM to change its course and complete its second half all the way till Majas Depot, which falls somewhere between Jogeshwari and Goregaon in western Mumbai suburbs. Chapter Two – Meeting People, And The Stories Behind Those Thousand Faces

Thakur meets various people on the bus but, recollects only a few. The school children, who hop on the first bus of the day, are a collective figure to him.

Thakur never went to school. For the longest time in his life, he remembered working with his father on the field. He clearly didn’t wish the same for his children. His daughter works in the railway while his son studies in a college in Mulund. His wife sometimes sews and alters garments for people to contribute her bit in earning for the family.

By 8.30 AM, Thakur’s bus reaches Majas Depot and he finally gets his 20-minute tea-cum breakfast break, after giving away the collected money and signing the duty chart. Reluctant to reveal his daily collection and income share, he says, “kabhi kabaar fine bhi bharna padta hai (sometimes, I have to pay the fine also)” but, isn’t able to explain how and what for. However, he talks about people who roam around in the buses like tourists with a day pass at a concession 50% in the happy hours of 11 AM to 5 PM and how that reduces the income share sometimes.

Making his experience talk, Thakur says he chooses the early morning shift so that he can rest his old body at home easily. “5 baje se toh khatarnak traffic shuru hota hai (Furious traffic starts at 5 PM)” The traffic can even prolong a conductor’s 8-hour shift to 11 hours. Thus, Thakur resorts to serve in the bright sunrise hours and ends his day before sunset, around 4 PM. He recalls that he used to do an extra shift of 6 hours a few years ago. Also, he says he doesn’t get bored at all but, it depends on the bus route too. If the route is busy, but, also has good roads, time passes by with ease. But, if the route is extra long, like that of the bus 491, then it is a pain. Chapter Three: The Lifeline Of Mumbai, And The Role Bus Transport Plays

Thakur expresses his concern over the roads being blocked for the construction of new metro lines. He says that construction of the metro will give greater inconvenience now and more population, later. He connects convenience with the onset of the population in the city and suggests Mumbai should not be made any more convenient but, other cities should be made like Mumbai.

“Bahut logg hai Mumbai mei (there are already too many people in Mumbai).”

Thakur thus has an opinion that this city can’t handle any more people.

Conductors can’t refuse people to climb on a bus. The crowd packs the buses so much that there is no place to breathe. There are no good roads for a smooth functioning of the buses. Hence, in such circumstances, when the drivers and conductors have no option but, to face the crowd and the traffic, a harsh behaviour in their tone is easily reflected as a consequent. Also, various commuters take out their own frustration and misbehave with them. Sometimes, they even try to hitch a free ride. This is the reason the bus conductors of BEST buses are compelled to have a stern attitude and hence, are stereotyped to be rude.

However, there’s still hope of some organization of traffic to seep in once the construction of the new metro lines is completed as this will divert traffic. But, will this also reduce the income of the bus conductors or will they upgrade themselves to being an employee of the metro instead of the BEST? Only time will tell.