Do you think Being A Magician Is Not Rewarding Enough In Terms Of Money? Wait Till You See The Magic! 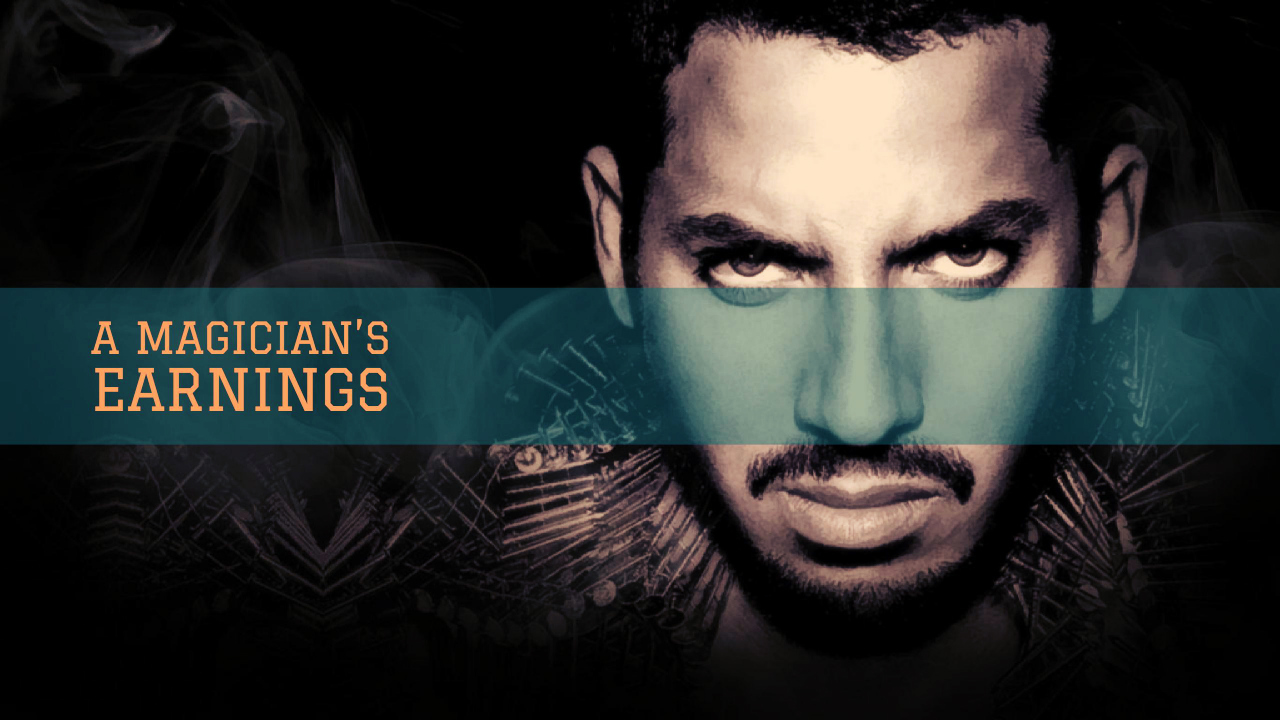 A Magician And His Bag Of Tricks

If you are one of those million millennials out there whose salary check comes in and disappears every month by some weird sorcery, (No sorcery, it’s the god damn bills!) you must have wondered if there was some reverse magic by which your account always have enough to cover your needs. Although I am yet to come across that bit of spell and believe me I have searched, I stumbled upon something quite unique. The Forbes list of highest paid magicians and boy! Do they earn a lot! I wonder how they do it. Do they just take it out of their hat? Well, since a good magician never reveals his/her secrets we will never know. But hey! What we do know is how much they are earning and some really cool tricks that they have up their sleeve. So Abra Ka Dabra! Hocus Pocus! Just kidding, keep scrolling, it’s really interesting stuff.

Blaine wears many hats (Yes! Hats will be a repeating theme here). He is an illusionist, magician and also an endurance artist. His pet tricks include holding his breath for seventeen minutes, eating glass and barfing frogs, which if you ask me is simply gross but interesting in some way; the same way you like Govinda movies now. However, the man is simply rolling in money, thanks to his bag of tricks, it is estimated that this Bronx-based magician has made a cool $6 million last year. His fortunes have dipped slightly as he has been embroiled in an investigation of misconduct, which was

brought on by former model Natasha Prince. However, over the years he has mind boggled stars, such as Harrison Ford, Arnold Schwarzenegger, Jamie Foxx, Kanye West, Macklemore, Drake, Will Smith, Jimmy Fallon and many others. It’s safe to say that he will bounce back on the list pretty soon.

Michael has something fishy going on about him. He is 41 but if you look at him, he doesn’t look a day over 25. Good genes or something is really going behind the scenes? Nobody knows. However, he may look young, but his bank balance backs him up. The magician managed to rake a whopping $7 million last year with his shows, which go houseful all the time. He has his own show too, called “The Carbonaro Effect”, which you can check on YouTube and from what I have seen; the guy is quite the performer. He is also a proud member of the LGBTQ community and says that his sexual identity and coming to terms with it helped him become a better artist. Now, you must be wondering, why did I mention that? That’s because rainbow pride doesn’t get appreciated and lauded enough and we should all do our part to bring forth and note the pillars of this community, so that they can serve as role models for everyone. Geddit?

If you throw a party on a budget, Derren is the guy you should call. One of his amazing tricks, that he has performed, is using hypnosis. No need to buy booze, just invite him over and get the party rolling. Looking at my last bar tab, that’s increasingly becoming an apt discourse to go after. However, I may decide to rethink the move though because, in one of his shows, he had hypnotised a person to steal a baby (although it was a rubber baby, I am still sceptical). I think it’s a little bit of that devil-may-care act coupled with crazy hypnosis power and mysterious aura that draw people to his shows and projects. Moreover, that also gave him a neat $7 million in earnings last year. By the way, just a friendly reminder, if you are homophobic, you may not want to be around him and frankly, if you are homophobic you don’t deserve all the fun. He is openly gay and is a mind reader to boot, so don’t say I didn’t warn you before. You might end up singing childhood rhymes while walking upside down. That was a joke, or was it?

You might know who Frayne is, but the name you would probably find a lot, if you are magically curious, is his stage name. This British magician, who raked $9 million this year goes by the name of “Dynamo.” As a child, he was heavily bullied but never lost heart and grew up to be an amazing magician with perseverance and hard work. In 2011, he performed something which can almost be said to be Biblical in nature – he walked on water at the river Thames. Recently in an interview, he revealed what made him envision the trick, which sealed his name in the book of great magicians. He said that sometimes the bullies used to repeatedly dunk him in a dam and “when I used to get thrown into the dam, I was just panicking and gasping for air and I just wished I could have walked on water back then.” Frayne also said that one of the bullies, whom he met years later, confided into him saying that he is a fan of Frayne’s work. Dynamo was taught magic by his grandfather and it also helped him battle depression. “When I got into magic from my grandpa it was the first time that I built the confidence to socialise with people because I knew I had learned something amazing. I was eager to show someone,” said the great magician.

These are the group of travelling magicians, who rotate from time to time in their shows. Each of them specializes in a particular branch of magic and showmanship. Their collective effort makes it an enthralling watch and the fact that they have cool nicknames, such as The Trickster, The Anti-Conjuror, The Futurist, The Unusualist, The Deceptionist and last but not the least The Daredevil, does help to build up the ante. Their shows are filled with high octane drama and the audience are always on their toes as they perform on the stage. They had a very strong run in recent times and have managed to rake $11.5 million last year. Interestingly enough, the top tier of the magic industry is male-dominated and the only female at the top is Jinger Leigh, who performs in this group along with her husband Mark Kalin. When Forbes questioned her about the gender anomaly she said, “It is frustrating, but don’t worry, we’ll get there, If I’m not the one that actually gets there, I will be essential in paving the path for the ones that do.” I do hope so; I sincerely do.

Now, we are really getting to the holy trio of the industry. Criss Angel has also been in the news for the list of celebrities that he had supposedly dated and the names are pretty heavy. The list includes Paris Hilton, Cameron Diaz, Lindsay Lohan, Britney Spears and Pamela Anderson. Criss Angel is a part of the magicians’ elite club and his show, called the Mindfreak, is one of the most popular shows across the world. He has been known to pull daring stunts; things that are impossible by normal human standards, including hypnotizing a huge audience and many such insane acts. All these have made him famous and also immensely rich. The man made a sweet $14.5 million and he has no intentions of slowing down anytime soon.

At first look, Penn & Teller would give you the appearance that they are more of a comedy duo rather than one with magic running in their blood. They are the oldest in the business and have been at it since the late 1970s. In a way, they are the modern day godfathers of the brand of showmanship magic that we get to see today, a marriage of humour and illusions packed in a ribbon with great presentation. This year, they eclipsed all the previous entrants by making a solid $30.5 million. They know they are the best in their business and even run a successful TV show called “Fool Us”,  where magicians are given a chance to well, fool the duo with their magic tricks. During the long run of the show, needless to say, the success rate of the appearing magicians has not been very high.

So what is the highest you can reach by performing magic? Well, it’s $61.5 million, as was earned last year by the living legend David Copperfield and this makes it his second year in a row on this countdown. He is a miracle in himself; he was inducted in the Society of American Magicians at a tender age of 12, becoming the youngest in the history of magic to be a part of that elite organization. Over the years, his grand illusions, such as making the Statue of liberty or Great Wall of China disappear, have garnered him a fortune of $850 million and an extravagant lifestyle that includes 11 private islands in the Bahamas. He is the most commercially successful magician in the history of magic, period!

Related posts:
[VoxSpace Life] How I Learned To Budget And Stopped Living Paycheck To Paycheck
Pragati Nivedana Sabha Of TRS : Of Delhi Supremacy, Federal Front And The Snippet Of Telangana's Fut...
[VoxSpace Politics] Re-Election Of Putin And The State Of Indo-Russian Ties