[VoxSpace Tech] Digital Detox 101 : After The Facebook Fiasco Is It Not High Time We Do It? 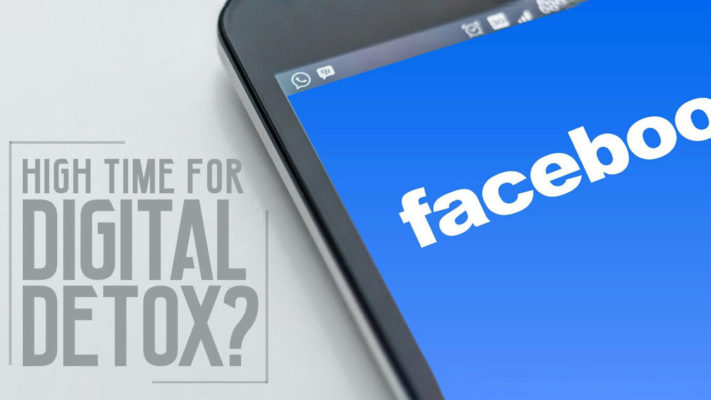 Will You Think I Am Crazy If I Ask You To Go On A Digital Break?

This article was supposed to be different. I was supposed to lecture you on how we have become so connected with the world and yet are losing out on the big things. How we need a digital detox now to refigure our lives. But where’s the fun in that? Why should you listen to me? After all, it’s just one guy blabbering out a philosophy that he himself doesn’t live by. So, before speaking about it, I decided that I should try something out. So, I committed the unthinkable – a digital martyrdom aka digital detox. Taking It Slow And Steady

Last night I logged out of Facebook, Instagram, Twitter, LinkedIn and even WhatsApp. I kept Gmail because I use it for my work purposes mainly. I asked my brother to wake me up at seven because I wanted to get rid of the nasty habit of enabling the snooze button and managing some extra sleep. I realized today that this simply doesn’t work. Everybody went to their work and I ended up sleeping till 10’o clock. I decided that I should take a break from office then; after all, I deserve it.

Breakfast is usually an affair where I gobble up food while going through my Facebook newsfeed. Now, that I wasn’t doing that, the entire premise felt weird. Then again, breakfast was interesting. I was actually chewing my food and enjoying it.  Most of the days, I just sloppily pile something together. Now, it was actually a lavish affair. I had proper plates and the butter on the bread was even. Then I decided to go out; it’s a day off after all. I wasn’t going to hail a cab via an app. So this involved standing in the afternoon sun and waving like a mad lunatic at every auto that went by. It can be a tiring experience; however, I discovered the magic of haggling. Apparently, no auto driver in the city uses meters anymore. So, “bhaiyya, 60 rupaiyya le lo…80 rupaiyya le lo…” He settled for 70 bucks. I can get used to deals like this. He was quite a chatty Kathy. So, I got to know about his family, how he came to the city, where he stays, and the cop problems he faced. I was enjoying it.  Instead of sitting in an air-conditioned cab with headphones glued to my ears and eyes steady on the twitter feed; I was interacting with people. By the end of the ride, I realized that I hadn’t had a “real” interaction in quite some time. It was always meeting a friend’s friend or my colleague’s friend or something like that. A small concentric circle that kept on growing but without actually leading anywhere, err, nirvana?  Not, yet!

Battle Of The Wills

Throughout the day, I had to fight the urge to go back and check on what was happening in the social media. What if something important has taken place and they didn’t tell me, I thought many a time. Instead, what I did end up checking was my phone’s native inbox messages folder. Hiding behind the promotional messages and companies trying to sell me stuff, were some messages from my grandmother. She has mastered using the phone recently and apparently, she’s been texting me messages like – “Hi. H.O.W. A.R.E. Y.O.U. ?.“ and “E.A.T. K.H.A.N.A.T>Hi.K.S.E” for the last 15 days. I never check my inbox; I let the messages pile up and then delete all of them at one go. If you are reading this, check your inbox. Who knows, maybe you will find something heart-warming there too.

I have become so accustomed to buying clothes from either Flipkart or Amazon that walking inside a small store felt weird. I forgot how it was to have a shopkeeper piling shirt options in front of me with beauty tips, such as “Ye, shirt achha lagega” or “Ekbar material toh dekh lijiye.” It felt personal; it felt hands on. By the end of the entire exercise, I was in two minds – is it bad because it took too much time or is it fine because I was doing it on an off day?

Everything that happened the entire day was a repeat telecast. I was not going through something new, but something that I had done long ago and had forgotten all about because now there always is an app for it.

The phone did ring; the outside world didn’t forget me. At the end of the day, when I logged back in, I saw that I haven’t missed out on anything but memes and people’s extravagant marriages.

So, where are we at the end of this day? What is the takeaway here? “Nothing;” there is no takeaway. But, if you want a day to reconnect with yourself, a day when you don’t just want to shove the breakfast in your face, go to office, update statuses on social media and order takeaways sitting at home watching pay-per-watch content and instead want to enjoy your meals and listen to music; try a digital detox.

You will not have any major epiphany but you just might find yourself. Not the “yourself” that lives through a vicious cycle every day and doesn’t have anything or too much to do on a weekend, but the one that connects with its surrounding at some level; someone who enjoys a meal without posting its picture on Instagram or goes to a place without a check-in update.

Don’t do it to change your life but do it as an experience. Then, if you like it, make small changes to your life, if you don’t like it, let it be as it is. This is to a friend from a friend, who has been there; who has been a working 8 hours shift, 6 days a week; you deserve this digital break.