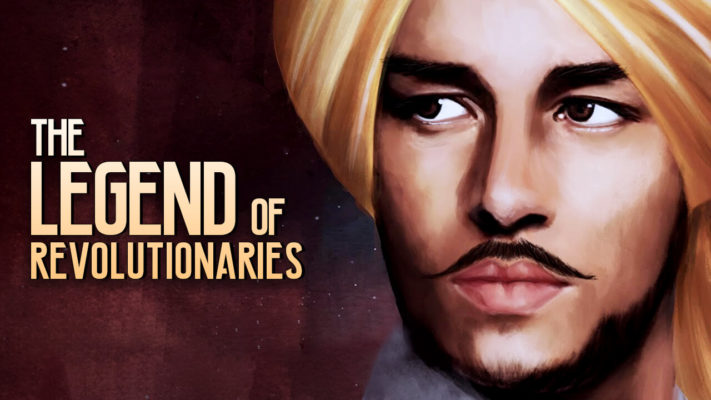 “Mera Rang De Basanti Chola”, reading this sentence most of you will be reminded of a song. Yes, these words which were written by Ram Prasad Bismil, a freedom fighter, are more associated with Bhagat Singh than any other freedom fighter. These words mean “O Mother! Dye my robe the colour of spring i.e. Saffron, the colour of sacrifice”. On 23rd March 1931, three young Indians gave their lives to bring a revolution in India. They were Bhagat Singh, Sukhdev Thapar and Shivaram Rajguru.  87 years later this sacrifice of theirs still resounds in hearts of many in the country, with the message, of the kind of country they wanted India to be.

Who Were Bhagat Singh, Sukhdev, And Rajguru? Bhagat Singh, born on 27 September 1907 to Kishan Singh and Vidyavati in Punjab, was a socialist revolutionary. As a kid, he witnessed a lot of atrocities by the British government against his family and the people of India. In 1919, a young Bhagat Singh witnessed the dreaded site of the Jallianwala Bagh, where thousands of unarmed people gathered at a public meeting were massacred. It can only be imagined what the pain would be in the mind of a young kid who had to witness the gruesome scene of dead bodies, of the people he knew. Bhagat Singh was an avid follower of Mahatma Gandhi and his philosophy of non-violence, even as a kid he took part in all the movements led by Mahatma Gandhi. One such movement was the Non-cooperation Movement, launched on 31st August 1920, where Mahatma Gandhi had viewed the total ban on British products such as clothes, books etc. He also instructed people to boycott schools, colleges and offices which were run by the government. Bhagat Singh was excited about this movement, but this movement was called off by Mahatma Gandhi because of the violent murders of policemen by villagers, who were reacting to the killing of three villagers by the police in the 1922’s Chauri Chaura incident. This incident averted Bhagat Singh from Gandhi’s philosophy. He joined the Young Revolutionary Movement and began to advocate for the violent overthrow of the British Government in India.

In 1923, Bhagat Singh joined the National College in Lahore, where he met many likeminded people who formed a life lasting bond with him. He founded the Indian socialist youth organisation Naujawan Bharat Sabha in March 1926. He also joined the Hindustan Republican Association which had many prominent leaders, such as Chandrashekhar Azad, Ram Prasad Bismil and Ashfaqallah Khan. Shivaram Rajguru was born on August 24, 1908, in Pune. Similar to every youth of that time, Rajguru grew to witness the unjust exploitations of the British rulers and started his journey on the path of revolution, towards attaining freedom for his Motherland. He was introduced to HSRA by Chandrashekhar Azad, where he met Bhagat Singh, Sukhdev and others.

This meeting of the three would later become a strong bond of friendship which they would carry till their deaths and even after.

Their Activities In The Fight For Freedom:

They served the country in many ways, from non-violent movements to revolutionary protests; they took part in every movement which would let them attain freedom of India. But two incidents, which made them household names were:-

In February 1928, a commission to study constitutional progress in British India was appointed by the British government under the chairmanship of Sir John Simon. This commission did not consist a single Indian, to represent India, whose constitution progress was to be studied. This led to a big disappointment and uncontrollable rage among Indians. This commission was confronted by many protesters with black flags in various parts of India. When this commission reached Lahore they were confronted by protestors who were led by Lala Lajpat Rai. Bhagat Singh, Sukhdev and Rajguru were also a part of this protest. In order to clear a path for the commission to move, the local police force, led by James Scott, began beating the protestors with lathis. Lala Lajpat Rai was critically injured; he succumbed to his injuries after few days. Following the death of Lala Lajpat Rai; Bhagat Singh, Rajguru, Sukhdev and Chandrashekhar Azad plotted to avenge his death by killing James A. Scott, but because of mistaken identity the plotters shot J.P.Saunders instead. The aftermath was very violent, so they had to escape in disguise from Lahore. This case would be called as the Lahore Conspiracy Case in the future.

On 8 April 1929, to protest against the Public Safety Bill, and the Trade Dispute Act, which had been rejected by the Assembly but were being enacted by the Viceroy using his special ordinance powers, Bhagat Singh, accompanied by Batukeshwar Dutt, threw two bombs into the Assembly chamber from its public gallery while it was in session. The bombs had been designed not to kill, but to scare. Though they could have escaped through the smoke instead, they stayed shouting the slogan “Inquilab Zindabad!” (“Long Live the Revolution”) and threw leaflets. They did not escape as the actual intention was for the perpetrators to allow themselves to be arrested so that they could use court appearances as a stage to publicise their cause. After the bombing, many illegal bomb factories were discovered which led to the arrest of many of Bhagat Singh’s comrades such as Sukhdev, Rajguru, Kishorilal, Jatin Das, Jaidev Kapoor and Jaigopal. While in jail he witnessed discrimination between Indian and British prisoners. He demanded equality, hygienic food, and clothes etc. which when were not provided to him led to a hunger strike, which was joined by his comrades. Many forceful attempts were made to demoralize them and to end the strike, but they were unsuccessful. After 63days of hunger strike and the death of one of their friend (Jatin Das), the government had to give in to their demands. Seeing this conviction and sacrifice of these young revolutionaries, a new wave of national fervour arose.

Though the whole country was in the praise of these heroes; few of their friends betrayed them and became approvers to the British government, which led to the identification of many revolutionaries. This also led to the re-opening of the Lahore Conspiracy Case, where Bhagat Singh, Sukhdev and Rajguru were found guilty and were sentenced to be hanged until death.

On 23rd March 1931, these brave, young, deeply in love with their motherland fighters welcomed death with open arms. Their Message To The Future Generations –

“It is easy to kill individuals but you cannot kill the ideas. Great empires crumbled, while the ideas survived.”

“The people generally get accustomed to the established order of things and begin to tremble at the very idea of a change. It is this lethargic spirit that needs be replaced by the revolutionary spirit.”

“The sanctity of law can be maintained only so long as it is the expression of the will of the people.”

These martyrs, they died with the dream of a free and shackle less India.

Is this how they wanted to see their free and independent Motherland?

Is this how we treat our country which was freed by the blood of these heroes?

Have we betrayed them? Have we disappointed them?

These questions are to be observed and thought upon.