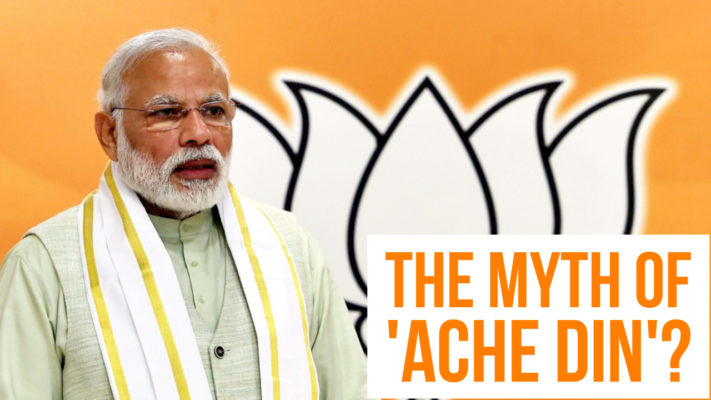 Narendra Modi was born on 17 September 1950 to a family of grocers, being the third of out six.  As a child, Modi helped his father sell tea at the Vadnagar railway station and later ran a tea stall with his brother near a bus terminus. Modi completed his higher secondary education in Vadnagar in 1967, where a teacher described him as an average student and a keen debater, with an interest in theatre. Modi had an early gift for rhetoric in debates, which influenced his political image.

Modi was a part of the RSS in earlier times. When former PM Indira Gandhi declared a ‘State of Emergency’, Modi was appointed as the Secretary of the “Gujarat Lok Sangharsh Samiti”. Shortly after that, the RSS was banned and Modi went underground in order not to be arrested. Later, in 1990 Modi became a part of the BJP and until date, he has grown from being just a ‘Helper’ to the ‘Leading member’ of the party.

Modi As The PM Of India

Modi was sworn in as the Prime Minister of India on 26 May 2014 at the Rashtrapati Bhavan. He became the first Prime Minister born after India’s independence from the British Empire. Ever since the day Modi was elected as the PM, India is in a fix, struggling to understand if he is doing good for the country or is he just making changes and flying abroad.

Promises Made By Modi Before Elections

Three years have passed with Modi being our PM, and yet, the promises made before his elections still remain ‘unfulfilled’. Modi before and during the time of elections made huge promises to the nation, which led to the mighty victory. India gave Narendra Modi a sweeping mandate, but instead of the promised  “Acche Din”, they are witnessing a systematic attack on India’s institution. The promises made by Narendra Modi have now left the citizens bewildered and confused. Modi made big promises in terms of economy but has failed to deliver those promises. His Hindu nationalist views can weaken India’s secular character and hurt the economy in turn. The Narendra Modi-led government seems to have bitten off more than they can chew, as it is struggling to keep its prominent poll promises. On maintenance issue: Muslim personal law mandates iddat period, meaning, a period of waiting. During this period the women cannot marry any other man (roughly three months after divorce) for maintenance. The Supreme Court said Muslim women are entitled to seek maintenance under the section 125 of the iddat period which grants the same relief to wives, children and parents.

On the issue of polygamy: According to the  Muslim law, it grants the men the right to have four wives. However, the Supreme Court ruled that polygamy is not a part of any religion.

The Modi-led government also failed miserably in keeping up with his employment promise. In the 2014 Lok Sabha rallies, Modi promised the youth of the country that he will create one crore jobs for the youth, but it has been three years and well, he failed terribly. Currently, the youth at present is still facing havoc in finding a job. Modi promised himself and all the Nation for employment but failed miserably in doing so.

Everyone should get employment in their hometown, says Narendra Modi

According to the NDA government’s record, Narendra Modi’s pet Clean Ganga project hasn’t grown in any proper way. “There were deficiencies in planning and laxity in spending available funds by the State governments as targets set for constriction household toilets and making villages open defecation free were not achieved,” stated the CAG report.

Swachh  Bharat – clean Bharat was one of Modi’s biggest promises which were on fire at the very beginning itself, Swachh Bharat has failed to live up to its hype. Back in the year 2015,  according to an India Spend report, over a crore toilet were built during the per years 2008-11, compared to just 80 lakh toilets built across the country during 2015-16. Sadly, Modi did get the toilets built, but they lacked water supply, which ended up being useless.

In every speech Modi stated to the nation, ‘Ache din aane wale hai mitron’, three years have passed ever since he has been in power and yet no sign of ‘Ache din’.

How The Common People See Modi And His Government

For Sumeet Sharma, the government of Modi has brought up the country to it’s best,  he states, ‘Modi is a person with power and has raised India to the next  level, the number of achievements that India couldn’t earn in three decades, with Modi we’ve achieved them in 3 years, the economy of India earlier was quiet low, but once we’ve Modi as the PM it has come up to the 5th rank in world economy, well, coming to BJP ruling once again, I think with this development over all, they will once again have victory.”

For  Samuel Aiman, the government has brought about changes in the country be it good or bad. But, one of his major changes which caused the whole country to be in a state of havoc was demonetisation. The most affected were the farmers and minimum wage breadwinners because they didn’t have any information until a week or two later from the time it was demonetised.

He is a man of many words and does get the crowd going, but going by his past and the political background, BJP has always kept their no.1 spot in being the most corrupt. Well, in the upcoming elections, India doesn’t need a party that brings down the shame of its women and members who support a rapist. If Modi continues to be the PM in the next elections, he should be able to stand up for his people – The Nation.  He might be able to retain his place as the PM of India, provided he does things he has promised and by really getting the “ACHE DIN” in reality.

Though the Modi government has gone far and wide with the development of the Nation, at a certain point, they have lacked in the Safety, Well-being of the very own people of their country.  There are chances of Modi leading the Nation once again, but they’re also ample chances that the people will rise against the government’s negligence.