The Rise Of Multiplayer Games: Battle Royale, EA, And The Death Of The Single Player Games 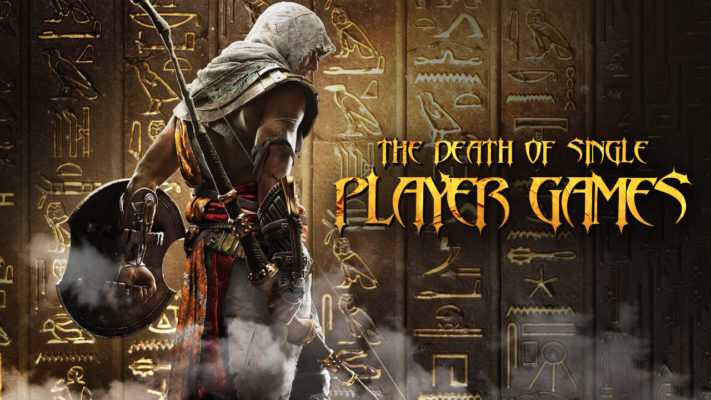 The previous year has been turbulent for the gaming industry. That’s something that most gamers who follow the landscape and politics will surely agree on. While industry giants like EA and Activision confidently tout that multiplayer games are the only way forward, there are defining moments, incredible games, that have risen, seemingly from the ashes, to prove them wrong.

At the same time, we are witnessing the explosion of a new subgenre of games. One that has taken the gaming masses into yet another conflict, where people have no choice but to choose a side.

But what is actually happening behind all of this? What does it mean when some of the biggest gaming companies in the world say that single player games are dead? Will we no longer have incredible stories to immerse ourselves into?

To find that out, we need to start elsewhere. We need to find out why these companies are vouching for multiplayer games.

At their core, every gaming company is just that, another company that is looking to make money, ensure that their employees get their salaries, and their shareholders get their investment’s worth in profits.

And at times, that means that the companies are encouraged to do things that are not in the interest of their customer, but that of the shareholder. I don’t need to tell you how much of a bad idea this is. When a company focuses away from their customer and more on the pockets of their shareholder, that produces a bad product.

Multiplayer games are built once, but the constant feedback of having to purchase new armours, weapons, cosmetic upgrades, and more, ensures that there is a steady revenue stream from one product. It’s not a single purchase.

If you’re not familiar with all of these terms, here’s an analogy to help you.

It’s like enrolling your child into a school, and to ensure that they remain competitive and “among the cool kids”, you have to buy them the latest backpacks, pencil cases, lunchboxes, and clothes. You aren’t paying for just the education (or in the gaming equivalent, the experience that you bought the game for). To ensure that your child is among the best, you are forced to pay a premium, continuously, constantly.

This business model works great for the shareholders, but it forces developers to produce games that are of subpar quality, with the sole intent of milking the customers out of money, not giving them a positive experience.

That is what a multiplayer game can achieve. By pitting people from all over the world against each other, customers are forced to pay more to stay competitive. That doesn’t happen in a single player game. It’s one purchase, and the gamer gets the total package.

Battle Royale, the New Multiplayer on the Block

Battle Royale is a type of multiplayer game, where gamers are thrown into an arena of sorts, and forced to fight it out until there is one man left standing. This is not a new concept, but it is something that has taken the gaming community by storm over the past year.

Two of the most popular games in this genre are PlayerUnknown’s Battlegrounds (PUBG) and Fortnite.

But what makes Battle Royale games like this an interesting case study is that big publishers like EA are also taking notice of this, and for all the wrong reasons.

These are multiplayer games which can also be exploited to prey on the wallets of the gamer, keeping that in mind, EA has already announced that there will be a battle royale mode in the latest iteration of their hit franchise, Battlefield.

Gamers are already wary of anything put forward by EA, due to the massive controversy over predatory practices in their recent title, Star Wars Battlefront 2. Another move to do the same does not inspire confidence, especially when they tout that the single-player experience is not profitable for them.

But how true is that? We understand that a company needs to make money to stay afloat. But big publishers are spinning it as though single player is a complete waste of their resources, and not something that is likely to pay off dividends.

Single Players, Not as Dead as They Seem

Single players games are difficult to create. That’s because they demand a great story, intuitive gameplay, and a satisfactory amount of play time. And for all of this, customers pay only once.

Right off the bat, you see why publishers are more interested in building multiplayer games. This is also why they’re eager to hurriedly write off the death of single player games as well.

But with recent trends, that has shown itself to be thoroughly untrue. Here are a few examples where single player games have shined.

Piggybacking off of the legendary reputation that the original Doom has, this reboot did not garner many hopes from the community when Bethesda studios announced that they were working on a Doom game. But after the game released, it brought back all the nostalgia and excitement that older players remember. The game was lauded for having an incredible single-player campaign. Interestingly, the weakest part of this game was the multiplayer aspect.

Featuring the celluloid hand-drawn cartoons of the 1930s, Cuphead is another single player game that achieved mainstream success. Although it was published by an independent studio with a shoestring budget, there is still the case of “If a small studio can do it, why can’t a multimillion dollar giant?”

This was another game that achieved mainstream success and was widely recognized for having an amazing single-player experience. Told from the perspective of Senua, a woman afflicted with Schizophrenia and fighting through hell to recover the soul of her dead lover, this was one of the most narrative-driven games of 2017, and entered the hearts of many gamers.

God of War is a game that needs no introduction, even for people that aren’t necessarily in tune with the gaming industry. Many people were hesitant when there was the new God of War game was announced. This is because of how far the game strayed from its original Greek mythology roots, instead choosing to focus on Norse mythology to progress the story.

But the risk was well worth it, and although the game is still fairly new, it’s already earned the title of the fastest selling game on the PlayStation 4.

And there are many more games, that would take me another article altogether to list out completely.

But what do all of these games prove? We have games from established studios and independent risk takers alike. All of these games are focused on a compelling single player game. And they work. They sell millions of copies, and they earn a great name for their developers and publishers as well.

They’re Dead Because Some People Want Them Dead

The death of these games is being advertised for one reason. They are difficult to make and consume a lot of time and resources.

So, if you hear a game developer say that single player games are difficult to make and not profitable, you’ll know that they’re telling you something else. They’re telling you that they don’t want to spend the time and effort into building a game that can truly be remembered for the ages. They want to make the quick buck, and sadly, judging by the current climate, a fair amount of gamers are perfectly happy with that.

So, What is the End Game Here?

Battle Royale games, fast-paced multiplayer shooters, MMORPGs (Massively Multiplayer Online Role Playing Games), MOBAs (Massive Online Battle Arenas), all of these do have a market, as they should. There are great games in these genres, and people who enjoy them have every right to do so.

To do that, as a customer, as a gamer, there is one thing that you can do. Vote with your wallet. Buy the games that are worth your time. Buy the games that promise to leave you with a story to ponder on, long after you’ve exited the game. Buy games that deliver an experience, not rob you of your time and money. If we can do that, we can keep single player games alive for a very long time.