[VoxSpace Review] Kaala Review : A Glorious Call Back To Rajni’s Career, And It’s Something More 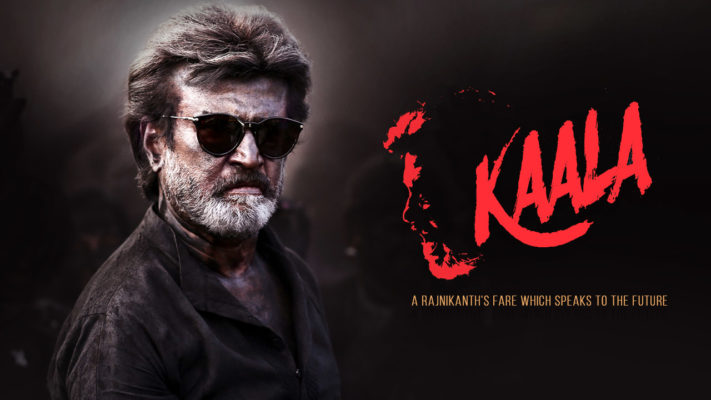 When I first saw the trailer for Kaala, I was genuinely sceptic about the film. Not because it looked bad, but because Rajnikanth movies have become a bit stale, with several of his past entries. Personally, my opinion is that Sivaji was his last best movie.

But as any red-blooded Tamilian, I booked a First-Day-First-Show ticket for Kaala and waited in anticipation once the title card with the familiar “Super Star” logo appeared in front of me.

A Familiar Plot, But That Doesn’t Mean Boring

Rajni movies are formulaic, and anyone going into a cinema shouldn’t expect otherwise. That is what we want, and that is what has been delivered, but it has been done so masterfully.

Kaala’s story is simple. He is the gangster/protector of a group of Tamils in Mumbai, who all live in the slums of Dharavi. He’s taken the responsibility of protecting their livelihood from corporate and political greed. But what makes Kaala refreshing certainly isn’t the story, but the cast of side characters, most of whom make their presence genuinely enjoyable.

It was a breath of fresh air to see that he wasn’t pretending to be a sprightly 20-something romancing some attractive college girl.

Instead, he is married to a fiery, yet awkwardly adorable Karpooravalli (Easwari Rao). He has a colourful family, consisting of sons, daughters-in-law, and grandchildren. All is right with the world, and he is content to relax and let things take their course.

In the middle of this strife is Zareena (Huma Qureshi), a naive do-gooder who used to know Kaala from his past.

If you have watched old Rajni movies like Padayappa, Arunachalam, and Baasha, you’ll easily spot elements that have been lifted to provide just enough nostalgia to keep you hooked, but enough freshness to see that this isn’t a simple rehash of the Rajnikanth brand.

A Strong First Half, But A Dragged Out Second

The movie runs for 2 hours and 46 minutes, and I personally loved the first half. The exposition was given priority over trying to make scenes look cool for the hardcore Rajni fans.

It’s clear that story was given precedence over flashy camera work and crazy stunts. That’s proof when the first fight scene comes in an hour after the movie begins.

The strongest point of the second half is the final thirty minutes, which tidily wraps up everything.

If I had one major issue with this film, it’s the second half, which tries to prolong a story that could have been wrapped up way earlier. There were at least fifteen minutes that could be cut and had minimal impact on the story.

Music Is Fresh, But Not Always Appropriate

To me, most of the film’s score was apt, but there are a bunch of on-screen rappers, who are a part of Dharavi, that provide music at times they feel necessary.

While this is a fresh direction to take music to, I can’t help but wonder if it was really necessary for certain scenes. I felt they took away from the scene than add to it.

Otherwise, songs such as “Katravai Patravai/Onti Thala Ravana” and “Urimaiyai Meetpom” lend a lot to provide some atmosphere to the story, while my personal favourite was “Kannamma”, lending a bittersweet and heart-rending mood when Zareena and Kaala were on the screen. The song lets the actors speak with their facial expressions while providing a medium where everyone can feel the heartache between the two.

Punch dialogues are important for any Rajni film, and this movie is no different. There are certain moments which will be memorialized, as so many other Rajni dialogues are.

But at the same time, the dialogues don’t feel cheesy. There are moments where sharp wit is thrown aside for simple lines that make the film that much more believable.

But the best part of the dialogues is that they are a great mix of Hindi and Tamil (at least the Tamil dub that I watched). It lends itself well into believing that this actually is a movie set in Mumbai, and not using Mumbai for the sake of using it.

In terms of camera work, this is the best Rajni movie that I’ve seen. Certain shots are gloriously colourful and vibrant, with certain angles making the film a pure joy to watch.

There are some slow motion scenes, but they are tastefully done, and not flooded into the fights at all.

Murali G has done a fantastic job with the cinematography. With Ranjith guiding him, the film feels like a modern-day Rajni film through and through.

A Social Message Delivered In A Film

Putting aside Rajni’s real-world foray into the world of politics, the film tackles the issue of the war between the poor and the rich. Here, the slums of Dharavi are the plot device used to tackle that.

The movie tries to bring together this message of unity between religions, social gaps, languages, and past. It frequently attempts that and succeeds most of the time. At others, it just feels awkwardly shoehorned in.

There is also the issue of discrimination against Tamils, but I personally felt that was given a second seat to the struggle of the poor.

If like me, you were waiting for a Rajnikanth film that has matured with the modern times, then Kaala is for you. If you have been waiting for a Rajnikanth movie where he retains his old charm and style, yet gives way to a colourful set of side characters, then this movie is for you. If you, like me, have been bored by his last entries like Endhiran, Lingaa, etc, and wanted to see Rajnikanth get back to his former glory, then this movie is for you.

Kaala is the Rajnikanth movie that we have been waiting for, and Ranjith has delivered in spades. It blends the old and the new while respecting both. But I do wish the second half was a teensy bit shorter.