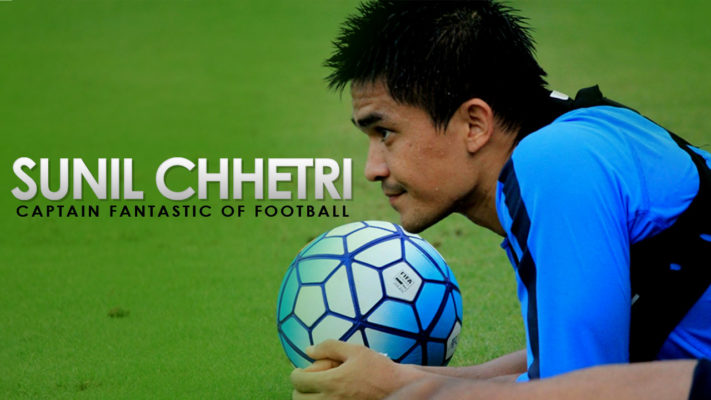 Sunil Chhetri- A Plea That Moved The Entire Nation

Sunil Chhetri was the reason why thousands of Indians rushed to buy tickets for the India vs. Kenya football match in Mumbai after he pleaded with fans to attend the games. All 7,000 tickets at the Mumbai Football Arena for the game were sold out after his video went viral on social media.

“Please come and support us, encourage us, watch us, abuse us, criticize us. Football in India needs you,” he says in the video. Chhetri, who also scored a hat-trick in the previous match against Chinese Taipei, added: “To all of you, who have lost hope or don’t have any hope in Indian football, we request you to come and watch us in the stadium. It’s not fun to criticize and abuse on the internet. Come to the stadium, scream at us, shout at us. Sometimes you guys think the level is not the same so why waste your time? I agree the level is not the same, not even close, but with our desire and determination, we will try our best to make your time worth it.” said Chhetri.

Chhetri uploaded his video on social media pleading the nation to support them, after a very low turnout, of fewer than 3000 spectators, during their first match against Chinese Taipei, which they won 5-0. After his video went viral, however, each game had a stadium packed with people including famous celebrities as well. Chhetri may have done more with a single video, than what the AIFF could do with their deep pockets and huge investments, in promoting football in the country.

On Equal Footing With Football Legends

In the Intercontinental Cup finals against Kenya, in a stadium packed with exuberant supporters, Chhetri scored twice as India won the Cup. Chhetri equalled his goal tally with Argentinian legend Lionel Messi’s then score of 64 international goals. This made him the joint-second active international goal scorer behind Cristiano Ronaldo who has 85 (as of 20 June 2018).

Chhetri had started playing football at a very young age. He was born on 3rd August 1984 to K. B. Chhetri and Sushila Chhetri in Secunderabad, Telangana and has a sister named Bandana Chhetri. His father worked and played football for the Indian Army while his mother played for the Nepal women’s national team. Chhetri had to sacrifice his schooling in class XIIth as he went to represent India at the Asian School Championship.

Chhetri started playing domestic football with Kolkata based football club Mohun Bagan in 2002. From there on he went to play with several Indian clubs until 2008 when rumours spread of him having impressed foreign teams like Estoril Praia of the Liga de Honra and Leeds United of the Football League One. In an interview, Chhetri said that “Nothing has been confirmed as yet but yes, I think I am close to getting there.” But the deal was never finalised.

English football club Queens Park Rangers had offered Chhetri a contract too, but he couldn’t get a work permit from the British government owing to the fact that India was not in the Top 70 of the FIFA world rankings.

Chhetri, however, stated “But it’s not the end of the world. I will still continue to work hard for my country and my club Dempo, who have been very supportive.”

In the same month it was reported that Scottish Premier League team Celtic was interested in scouting Chhetri and Yogesh Joshee, his agent was quoted saying “I’m waiting to get feedback from Celtic, who saw him on Monday by head scout and then another scout came to watch game, I’ll let you know the outcome when I know.”

It was the 2008 AFC Challenge cup which helped Sunil Chhetri rise to fame, in which he scored 4 goals. In the finals against Tajikistan, he scored a hat-trick to help India claim the title, also enabling them to automatically qualify for the 2011 Asian Cup.

A Wizardly Season With Kansas

Finally, in 2010, Chhetri was invited abroad for the trials with Kansas City Wizards, a Major League Soccer team in the United States. He played for them during their pre-season games. He then formally signed a contract with the team on 24 March 2010, becoming the first Indian to play in MLS and the third Indian to play outside of South Asia. Peter Vermes, the head coach of the Wizards, was quoted as saying “One thing we really like about Sunil is that he’s a crafty player. Technically he’s very sharp, and he’s a guy that has good attacking tendencies.”

Chhetri didn’t get to play a lot with the Wizards as he was soon summoned back to India by the AIFF to compete for the Indian National Team for the 2011 AFC Asian Cup. With this, his fate with the countries team was set in stone. It was later made official that he had left the MLS team and remained in India, playing with domestic clubs and competing for the national team. With his massive contribution of 7 goals, India won the SAFF championship which was hosted by India.

In August 2012, owing to the immense contribution of Sunil Chhetri, India went on to become the champions with Chhetri being one of the highest scorers in the Nehru Cup with 4 goals.

India won a home game against Macau on 11 October 2017 in the 2019 AFC Asian Cup qualifiers as Chhetri scored and assisted in the 4-1 win. With this win, they qualified for the 2019 AFC Asian Cup. This year also marked the start of Chhetri’s married life as he tied the knot with his longtime girlfriend Sonam Bhattacharya on 4 December 2017.

As an Indian footballer, Sunil Chhetri has collected many a trophy for his cabinet. He won the Arjuna Award in 2011 and was the AIFF Player of the year in 2007, 2011, 2013 and 2014. He also won the AFC Challenge Cup Most Valuable Player in 2008 and the Hero of the Intercontinental Cup this year.

Football is one of the richest and most popular games across the globe, but unfortunately, in India, it is completely overshadowed by cricket. Adding to its unpopularity is the lack of great players that the nation has failed to produce time and again. Sunil Chhetri has been quite successful in promoting football in the country and has done more than any Indian ever could. His efforts have inspired a lot and have paved way for the budding talents and future prospects in the game.