[VoxSpace Review] Ee Nagaraniki Emaindhi: If You Are A Dreamer, This Is Definitely Your Film 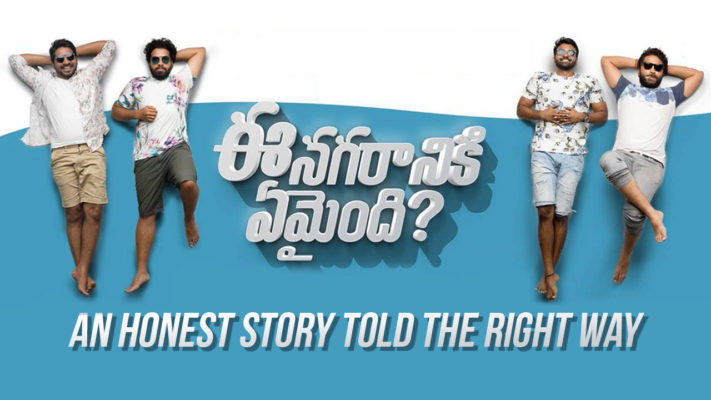 Without any doubts, if you consider that a new age in Telugu cinema has begun then Tharun Bhascker is definitely the man who kick-started it. Diving straight to the point, Ee Nagaraniki Emaindhi? is another example of how a good movie doesn’t need magnum star cast, jaw-dropping twists or loudly mouthed dialogues. All it needs is an honest story, rightly placed actors and a committed team to drive everyone towards their goal of telling a story.

Tharun Bhascker and team have again hit the bull’s eye, but this time around with ‘almost true stories’ that have been picked from their own lives. It’s a story of four close friends, who aspire to make movies. They start off with short films, encounter their weaknesses meanwhile, test their fate, fight among themselves, hug their situations out and emerge as winners. It seems like a simple story, but it reflects to the lives of most of you reading this (I said most). The best part of the movie is the conversations that take place between the lead characters. Subtle, real and very breezy.

It has been promoted as a light-hearted buddy comedy, which in every angle it is. But as you sit through the movie, it digs deeper into you. It is not just about friendship, fights and comebacks; it is equally about believing in oneself, facing and dealing with weaknesses, challenging situations and more importantly finding your happiness.

The Take Away Factor

I believe that a cinema is always loved when you manage to keep the audience engaged throughout, but it will be truly embraced and people will remember your name only when you give the audience something to take home after the movie. Tharun is an expert in this segment. I’m not considering just his two feature films, watch his short films, you might agree with me.

For example, I don’t know whether to disclose the significance of the goggles Vivek wears, but the metaphorical explanation it carries between Karthik and Vivek is some genius stuff. That’s how, you not just make cinema, but also add some meaning to it and increase your audience’ intelligence.

The Newbies Who Killed It

I must admit that the four characters of Vivek, Karthik, Koushik and Uppu, played by Vishwak Sen, Sushanth Reddy, Abhinav Gomatam and Venkatesh respectively were bang on. There is no other movie that has showed bromance as this one. In fact, this movie can also be termed as a ‘brom-com’. None of the actors over did any of their roles. Everyone had their moments and I can’t even say if they were acting, because they were executed so neatly that it only felt natural. Vishwak Sen aced it with his striking screen presence as a short-tempered filmmaker. Sushanth was dashing as someone who is successful in making money, yet doesn’t have his soul in place. Abhinav obviously stole the show with his timing and ‘being the puppet’ in the director’s hands, and Venkatesh was neat whenever he appeared on the screen.

Anisha Ambrose was smart, composed and Simran Choudhary glittered in her brief role. The kid, Arjun and every supporting cast fit the bill perfectly. Some episodes of writing were literally a piece of gem. Niketh Bhoomireddy with his camera added great flavour to the movie’s feel on a whole and is definitely an asset to this brom-com. Vivek Sagar was his usual self with the music, productive and pleasing only when needed.

Drawing Inspiration From The Ordinary

You might come across a few lags here and there, but I was least bothered as the movie kept me going. There are many stories and characters all around us. You only have to know when to pick what, and from where, to draw inspiration. This is a complete Tharun Bhascker show and his friends- Srinivas Nanduri Kaushik, Upendra Varma and Vivek Sudanshu would definitely be feeling overwhelmed and proud of their friend. Dig out some time, catch up with your gang of friends, go watch this honest film. Lay back, sit down over a few drinks and talk the night away about your friendship.

And for every dreamer out there, this is your film! An ode to friendship! An ode to (short) films and makers!!

And YESSS, there are some sweet surprises in the movie as well… guess you should watch it to find out.