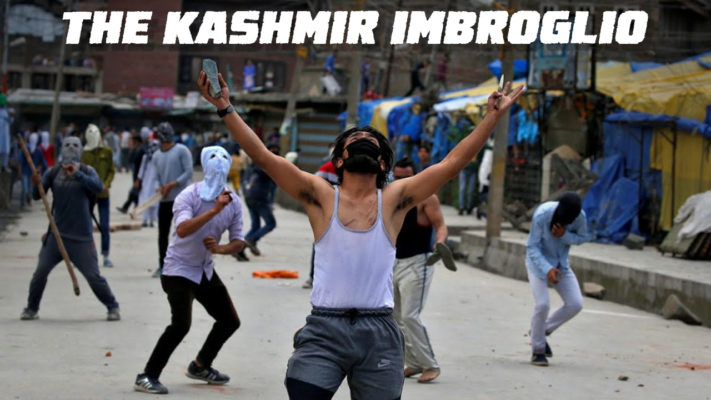 The Current Political Situation In Kashmir

The country was taken by surprise when in the year 2015 BJP shook hands with PDP to form a government in the state of Jammu and Kashmir. It was even more surprising when two days ago the news of BJP breaking the alliance with PDP started doing the rounds and soon was confirmed. With this, the state was imposed with governor’s rule for the fourth time in the past 10 years. This sort of a political unrest has resulted in the volatile situation we see in Kashmir today. While this sort of an unrest is not new to the state of Jammu an Kashmir, this move of the BJP right before the 2019 elections cannot be overlooked as a result of mere lack of unison among the two parties.

In what seems like quite a brilliant move by the BJP, where the party withheld its exit until Tuesday so that the assembly elections in the state of J & K could not be held before the 2019 Lok Sabha elections. J&K BJP chief Ravinder Raina and BJP General secretary Ram Madhav while announcing the breaking up, hinted towards PDP being a hindrance to the anti-terror, anti-militant operations and that the rise of violence in the state is a threat to the fundamental rights of the people of the state. This not only will be used as propaganda to trigger the jingoist mentality in order to garner votes, but also as a cover-up of the central government’s inefficiency to bring normalcy in the valley.

In the past four years of the BJP-PDP rule, there has been a rise in the number of incidents of violence from both the ends i.e. the state as well as the militant groups. With the killing of Burhan Wani, the commander of Kashmiri militant group Hizbul Mujahideen, on 8th of July and the subsequent unrest in the valley for the next six months, Kashmir has been in the national-international news for all the wrong reasons. The security forces have time and again been blamed for blatant violation of human rights, be it the usage of pellet guns on unarmed civilians or e tying up of a civilian to the army vehicle, there is no doubt that the situation in Kashmir and the way these situations are dealt with by the state is unlike any other part of the country. The counter-narrative that is being set by the Indian state is that the people of Kashmir are terrorists and are involved in anti-national activities and are a threat to the security of the country. Instances of stone pelting and killing of army officers/jawans have time and again been cited a the reason for taking such strong actions, like using of pellet guns, by the army.

Kashmir has been a site of unrest for as long as one can remember and all the governments till date have failed to resolve the issues. With the current government collapsing we can only expect more unrest to follow. This move of the BJP can be seen as a preparation for the upcoming Lok Sabha elections. Any alliance with PDP which is a soft separatist could have cost them major votes in the mainland. Now, with the BJP withdrawing its support for the PDP it can go ahead with its propaganda of nationalism and could use this move as a marker of their own nationalistic credentials.

What Does The Turn Of Events Hold For The Valley?

As for Jammu and Kashmir, the state has time and again been the prey of various political parties that have failed to do substantial work and have put forward nationalism and national security as an excuse for their failure. The upcoming presidential rule would most probably bring the same with an increase in anti-militancy operations and large-scale popularisation of these operations. As a matter of fact, in the past 4 years, India has gone from bad to worse. The current government has failed to fulfil any of its election promises. With the lack of jobs, price hike and an all-time increase in hate crimes and incidents of religious intolerance, Kashmir might just get used again to silence the real questions.

The real fear, however, lies in front of the people of Kashmir. With lack of basic facilities like education and health and lack of opportunities, the fall of the government might bring the darkest of times for them. Since the killing of noted journalist Sujata Bukhari on 14th this month, the situation has worsened and the overpowering emotion right now is that of fear throughout the valley.

From The Pan Into The Fire

For the people in the valley, life has become a run from one graveyard to the other. For years the state of Jammu & Kashmir has been at the centre of the never-ending conflict. The root of the problem lies in the manner in which the erstwhile princely state of Kashmir acceded to the union of India. During the India- Pakistan partition the state was ruled by a Hindu king Hari Singh. Since the state was a Muslim majority state, Pakistan claimed control over the region. At that time, the Kashmiri leadership, led by Sheikh Abdullah, wanted a secular state and were against the inclusion of Kashmir into a theocratic state.

Meanwhile, the state was attacked by Pakistan sponsored tribesmen and the Maharaja of Kashmir had to accede to the Indian state, although with a special status. During the Indo- Pak conflict, the issue of Kashmir was taken to the United Nations and a resolution was passed that the fate of the people of Kashmir will ultimately be decided by the people of Kashmir through a plebiscite. But for the plebiscite to take place, it was essential that Pakistan withdraw its forces from all occupied territories, but Pakistan has refused to do so. Due to the perpetual tensions brewing between the two countries, both the countries have failed to come to an agreement and it has become a matter of prestige for the two.

Down The Lanes Of History

What started as a discontent due to failed promises from the state’s side has now taken the form of a movement due to the negligence of the governments. The people’s anger is being used by various organisations for their own nefarious designs. After thousands of killings and disappearances, the valley has now become a mourning ground. With the continuous loss of life and no way to get out of the vicious cycle, life has come to a standstill.

“ There are no schools, the ones that we have are closed half the time, the business is on only for four months during the season time, we cannot really go out of the state and find work as people don’t want to give us jobs outside,” says Adil, who takes people on his horse to the higher points in Gulmarg.

This conversation hits a chord and forces us to think about why does a 19-20-year-old in Kashmir choose the life of a rebel. What would you and I do if we had no schools, no education, no jobs and were treated as second-grade citizens in our own country? The answer to this question lies in your answer.

“At Syed Shujaat Bukhari’s funeral today, I realised that life has come to a dead end in Kashmir. We are now nothing but a large crowd of numb mourners going from house to house and graveyard to graveyard, each one of us waiting for our turn to die,” these are the words of Shah Faesal, who is an Indian civil servant from the state of Jammu & Kashmir.

These words resonate the sentiments of an average human being from Kashmir. With the constant cross-border tension and the inefficiency of the state, return of normalcy seems like a far-fetched dream. We can only hope that someday the people ruling the land start thinking about those living on it. Kashmiris have been treated as pawns for long by the government, as well as anti-state outfits, and are now stuck in a doldrum. We need effective governance that ensures the rights of the people of the state and can resolve the issues one thing at a time. With the current situation, the chances of any relief are very unlikely, but hope keeps us going.