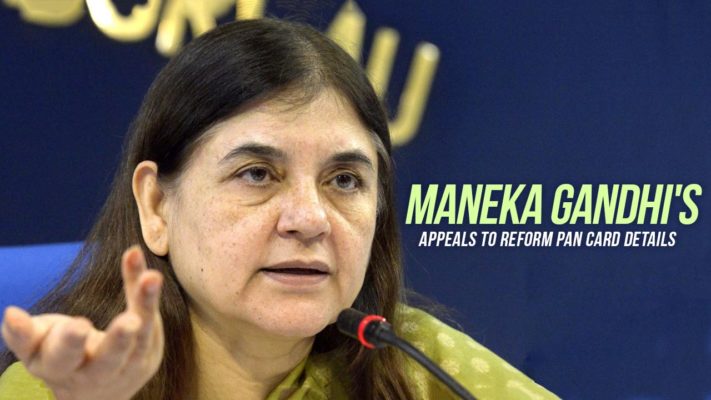 Maneka Gandhi Pledges For A Better Tomorrow For Single Mothers

Union Minister Maneka Gandhi, the sole member belonging from the venerable Nehru-Gandhi dynasty to be a part of BJP government quite recently raised controversies with her decision against implanting CCTV cameras in public transport. The disparage was mainly caused by her remarks that such a move would only deplete public money but would hardly manage to secure any concrete results. Commoners were quick to point out the insensitivity of such remarks, especially amidst hundreds of instances where women are touched inappropriately in buses and in extreme cases (which is hardly a rarity) get molested.

Well, given the flavour of the time, her remarks were truly controversial since hundreds of women started to accommodate workplaces as close as possible to their residences in order to spare themselves of humiliation. Many people joined in to demand their share of personal security as responsible taxpayers and citizens. Again, Gandhi caused a huge uproar with her declaration of the need to protect women and girls from ‘hormonal outbursts’ and restricting their movements within a ‘lakshman rekha’.  She, being the minister of Women and Child Development, failed to understand the severity of such remarks in present times when thousands are still fighting against autocracies on women.

However, recently Maneka Gandhi pressed upon the issue of doing away with father’s name in PAN cards, considering the single mothers who are solely responsible for the upbringing of their children. Gandhi in fact, requested Piyush Goyal, Finance Minister, to re-consider her appeal and implement the rule at its earliest. If at all materialized, it would be huge for a country like India, where single mothers are denied proper education for their children, home accommodation, and rentals amongst many. Gandhi’s plea came almost two years after Delhi High Court scrapped out the rule of printing father’s name on a passport following the distraught of a single mother while issuing a passport for her child. The move can be viewed as a silver lining, a cardinal change responsible for bringing forth a less humiliating bureaucratic system for single mothers.

This has to be a proud moment for every Indian, because of the sovereignty and strength that it would be conferring upon single mothers. The orthodox notions about single parenthood have not failed to reach even the circumference of educational institutions, more so due to the substantial amount of value that these ‘institutions’ happen to place on the concept of “proper family”. In the admission process, a mandatory requirement, concerning details about guardianship leaves many mothers perplexed and humiliated. Under the RTE category, The Right of Children to Free and Compulsory Education Act, which aims to support children belonging from weaker sections, has made it impossible for single mothers.

Here it is important to locate both the dictates of fathers and state institutions,  in the process, depriving mother and children their fundamental rights. These loopholes in different departments are functioning in society for decades, due to the inadequacies on the government’s part. Exactly what rights schools possess in deciding family structure or parenthood is still a mystery to me. However, Gandhi’s triumphant outlook might gradually change such old-world directives. In this context, it is also relevant to bring up the issue here of how the Supreme Court announced the creation of the third gender, taking into account the lack of privileges suffered by the community. India is at par with a number of countries on doing the same like Nepal, Pakistan, Australia, Bangladesh, Germany and New Zealand and I am confident that Maneka Gandhi’s decision to scrap off father’s name would set another milestone.

The Curious Case Of Single Motherhood In India

Indian expatriates often account for the disparity between single motherhood in other countries like U.S and India, the difference is vast due to the social outlook which refuses to accommodate any changes. It naturally poses a huge threat to those single mothers who are victims of an abusive marriage, sexual relationship, financial crisis, women who are belonging to the downtrodden section of the society. The constant nudge of mentioning father’s name even while they are adrift willingly is a blow to those courageous women, who have decided to undertake the journey on their own. The challenges and social stigma of single mothers in India vary from class to class,  and can never be solved unless the government is willing to make the efforts. RTE and its insistence on producing husband’s documents and accurate details during admission have fuelled the intricate functioning of patriarchy perpetrating in women subjugation.

Amidst growing discontent amongst single mothers from every stratum of society, the option of doing away with father’s name from one of the most important sources for establishing the identity of every Indian is radical. Maneka Gandhi’s decision was provoked by countless women complaining to her about the hassle they are facing while issuing certificates of their children since they are being asked to provide the father’s name mandatorily.

India on easing the stern and orthodox norms of yesteryear will additionally become more in sync with the changing dynamics of marriage as an institution, relationships, and role of women in society. Clinging onto tethered laws would not only restrict India’s progress but will equally contribute to germination of prejudices in society, thereby curbing the growth of a liberal atmosphere. We can only hope for Gandhi’s plea to come into action without delay, thereby trumpeting a new era.

Related posts:
[VoxSpace Life] Humanities Vs Math. Science Vs Humanities. Why, But? A Look Into The Disparity
[VoxSpace Exclusive] Meat : An Expose On Canine Meat Syndicate Of South India
[VoxSpace Selects] Lolla Kutty, Channel V’s Demise, And Wonder Menon! Yes In That Order