VoxTalks With Vivek Sagar : In Music It’s The Journey And The Learning That Matters – Not The Destination 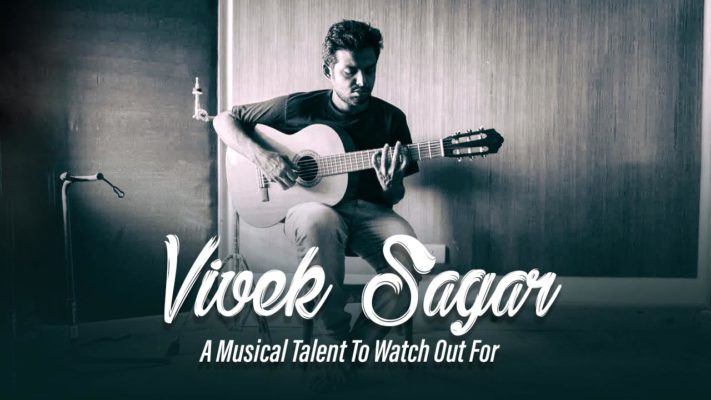 While on one side, the Telugu Film Industry is climbing new horizons for the better, the other side it is also introducing to us some really good bunch of talent, on whose shoulders the industry looks safe. One such talent that the industry has been lately tripping on is Vivek Sagar or we can rather call him the face of the music label, Tapeloop. It was the movie Pellichoopulu that threw the doors open for Vivek Sagar. He is no more an ordinary name now, people now know his music.

Listening to his music makes us, the Telugu audience/listeners raise our collars and feel proud. In spite of gaining great name and fame, Vivek has chosen to stay grounded and not let success sit on his head. He has been choosy about movies in order to gather great energy and put forward the best.

His music feels real, authentic and heart-warming. We at VoxSpace were lucky to spend time and have a tête-à-tête with him. Where he could spare some time and talk about his music in the early days, his Tapeloop gang and other interesting things. So let’s get started before you get bored with my words.

Hey Hi, Vivek! Most of our audience know you post Pellichoopulu. However, as Tapeloop, you guys started much earlier. We wanted to know when was the moment and who was the first person in your gang to confirm you guys will go ahead as the team, Tapeloop?

Hello! True, we were together much before Tapeloop was even thought of. I started off with a college band back in 2002-03.

Then I and Sanjay formed ‘Stiffneck Syndrome’ with a couple of other friends – we did Numetal/Alternative music. Played at pubs, fests, competitions, corporate shows. Then there was ‘Catharsis’ that we formed along with Phani Teja. It was a trio and we were playing our own tunes which were essentially Carnatic ideas backed with whatever other musical influences we had. We are still passively active, playing together whenever possible. So, this was like a precursor to Tapeloop. Sanjay and I were always interested in production and recording…so after the bands faded out and Catharsis went on hiatus, we started Tapeloop. Later Varun joined us to complete the picture.

Okay! So Vivek, even after achieving the needed fame and name with your first venture, Pellichoopulu, you guys never took the commercial path and are choosing movies selectively. What’s your approach to work and with many newcomers in the industry, how do you pick work?

We never looked at the fame aspect of it or rather never took it too seriously. It’s very momentary and it sometimes meddles with your mindset. Coming to the so-called commercial path, I think everybody has the right to choose their work. Also, that’s the beauty of working in a creative field, if you don’t connect to something it’s better not to chase it. Having said that, I have not always been a great judge in choosing the right work. I have had my share of backfires.

Also, a film needs much more than just good music to reach its full potential.

What are your favourite genres to listen to and the same when it comes to composing? Different kinds of musicality resonate with us in their own unique ways. I, fortunately, learned quite early in my musical pursuit that genres are mostly just labels and are only for segregation. So, I love taking on new grounds. Every style of music has its roots from some other, so it’s all the same in a way. But one should be able to understand, feel, adapt and apply the nuances in order to be able to present it in its authentic form. I love listening to anything depending on the company and the vibe. I’m fortunate to have met some amazing people who introduced me to several new aspects and styles in music. My brother Kalyan was one such influence. I’m sure there are so many more to be discovered!

Authentic – Yes, that definitely reflects in your music! Coming to your team, Sanjay, Phani, and Varun, not many people know them. So, could you tell us about them and their roles in your band?

Sanjay Das is our Drummer – Mix guy – Recordist – Natural Techy. Our families have been friends since even before we were born! He has been with me from the beginning and he’s influenced me in so many ways. It’s just great to be part of a team with him.

Phani Teja – we met on Orkut – it was the most random ‘scrap’ that altered my life. We formed Catharsis, something that we cherish till date. He still is my strongest Carnatic influence. He plays the electric mandolin and guitar (though I have seen him fiddle with the Veena and Violin).

Varun Venugopal – We were all actively part of this rock scene of Hyderabad around 2006-08. That’s when I and Sanjay met Varun. He has been a part of us since then. Other than being a crazy Bass guitar player, Varun has been a major force for the sync sound and sound design aspects of filmmaking.

There are so many more friends and musicians who have been a part of our journey at different times. We all have learned, experienced, and perceived music with them.

Most of the music we get to hear is through films. As a music composer of substance, can we expect you to come up with private albums or singles? There is a lot of music we have with Catharsis. We just have to find time to get some out. I don’t like doing compulsive singles for likes and shares. An album needs a certain mindset and a good amount of time to materialize. It will happen when its time comes.

We will be looking forward to that time eagerly! As a general audience, we do not have a clear picture of the process of composing a song. Could you briefly walk us through the process in layman terms? How is the tune picked, when do the lyrics fall in, and based on the situation how you approach the song?

For me, a tune or just the idea happens when there is inspiration and solitude after the soul of the song is conceived. It’s the song that tells you what to do next. Typically for a film, I take inspiration from the story or characters and then try and imply it musically and sonically. I also feel the director’s vibe is very important. His influences and choices matter a lot.

One of our favorite flavors of your music is the country folk, Merise Merise from Sainma or Rangu Rangula sitralanni from Story Discussion. Is there any inspiration behind this genre you guys play or that’s just your style?

Other than my fascination for folk and alternative forms of music, it’s surely got to do with the film/content and its makers. Both the songs you mentioned and also a bunch of other stuff we worked on are very reflective of the indie nature of the films itself. Both Sainma and Story Discussion are very grounded in their own ways. Also, I feel a certain connection with some elements of folk music. It is actually the music of the people. I have found parallels in African and Telangana folk music in the little that I have listened to. There is so much more to be explored and experienced though!

The sound and BGM for Pellichoopulu especially stood out. You guys were the first ones in the recent times to successfully pull off the sync sound in our industry. Could you throw some light on the technicalities involved and the barriers you face while sync sound?

I feel we just did what we felt at that point in time – I remember while working on the music, we had absolutely no idea if the vibe would be accepted. But it somehow came through.

The sync sound aspect was surely the brains of Varun. He was the location mixer. But the credit also goes to Tharun Bhascker for being absolutely sure to shoot in sync sound.

Barriers are always a part of shoots, no matter how much you plan. There was a good amount of preparation that went in before the shoot began. There was one incident where a school function had to be paused for the shoot to go on. That was an improv!

I guess Varun would have been the right guy to answer this. I hardly read anything about sound design or engineers or editors… the technicians need more exposure.

What’s the story behind your present Tapeloop studio at Chikkadpally?

Nothing very dramatic, but one major aspect is the place itself! Sanjay’s dad was kind enough to give us their place, which was empty so that we could practice with our band. This was way back in 2004. We have now successfully occupied the 1st floor too! But if looked back, it was so important for us to have space to just make music. It slowly took the shape of a studio… it kept growing with us, it still is!

I don’t think I have a motto per say. But, I have always believed in the pursuit of something rather than setting or having finite goals/achievements. Music is one such thing where it’s the journey and the learning that matter – not the destination.

Awesome! Let’s get into some lighter talks…

We heard you don’t stand any bakchodi around you. So, what do you do when you are not making music?

Haha… I don’t know how that got around but I guess I just make my choices and sometimes I’m vocal about them. I like watching something like a TV series or a documentary, hanging out with friends – just the regular stuff.

In case a suitcase full of money drops from your roof, what would you do?

The biggest gift you want to gift yourself?

A small farm with our studio attached.

Describe what the following mean to you in one sentence:

Sanjay Das – Can’t imagine all this without him.

Hyderabad – Home to the best chai ever at Nilofur café.

Guitar – Is a super dynamic instrument – I need more practice.