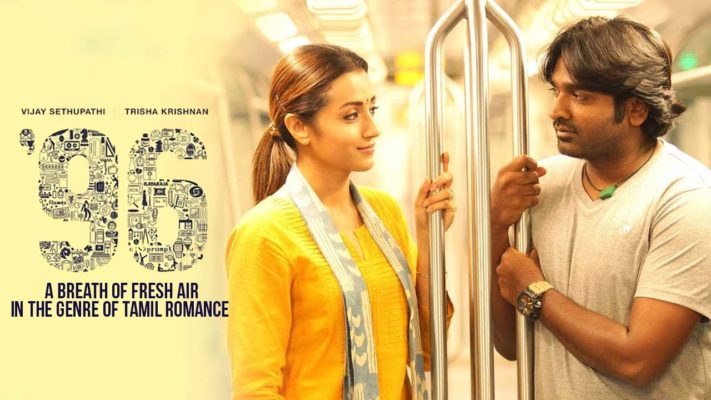 Vijay Sethupathi, the man behind Pizza, Vikram Vedha and Orange Mittai, who claimed million hearts with his eccentric ‘Super Super Super Ji’ is back with the heart-wrenching ‘96, quite an offbeat romance blooming between a mildly self-conscious Ram and enthusiastic Janu. We would never chalk out the exact formula that works for an actor, but no Tamil movie fan could ever deny the charismatic aura that Vijay Sethupathi builds around himself on the silver screen.

Previously with Karthik Subbaraj’s Pizza, Sethupathi ensured that there is not a single moment for his fans to yawn or get all baggy and relaxed in their seats. Sethupati is one of the very few actors today who would demand your utmost attention, this man who could paint a beautiful assemblage of emotions on screen, like colours on canvas. In ‘96 he waives a different kind of magic with panache. Salt pepper hair back-brushed, somewhat shy, and vulnerable in front of his childhood sweetheart he would make you reminisce about your own bittersweet memories.

So What Made Us Go Into A Frenzy?

The lead pair played by Vijay and Trisha Krishnan quite breaks the tedium of conventional big budgeted love stories. ’96 is a necessary respite from the amateur character sketches and weak scripts heralding Tamil industry. It is not merely about the plot or their physical surroundings that add to the mystery, but their expressions as well. The eccentricity of the character Ram accomplished meticulously by Sethupathi and Aadithya Bhaskar would keep you hypnotized through this 2:19 minutes trailer.

Aadithya Baaskar and Gouri G Kishan as young Ram and Janu respectively, weave poetry with their characters on the screen; halfway into the trailer, you would love the overpowering mystery shrouding the characters’ idiosyncrasies. The background score, by Govind Menon, emanates a classical air and further adds to the buoyancy that the actors strive to create. It is this cheerful lightness of the film juxtaposed with the intriguing last scene with Ram holding a torch in a murky apartment that ensures to rise above the clichéd romances that the industry generates. After all, it is not every day that we get to see films like Alai Payuthey, Mynaa or Mouna Ragam coming out of the closet.

Cinematographer turned director C Prem Kumar’s directorial debut is definitely a coup de maitre in the era of Tamil New Wave cinema. As an audience, one can only be hopeful that more such films are made every year to challenge the normalised and stereotypical portrayal of hero-heroine, turning every romance into a battle of sexes. Mysskin, Karthik Subbaraj and Kumarasamy, who had given gems to store in our stockpile, might just as well welcome Kumar into the fraternity.

Sethupathi, who hardly has any faith in the box-office numbers, is a firm believer of good cinema, which he prefers to churn out of his hard work and artistic capacity. I was reading in a famous tabloid about Sethupati’s nonchalance in seeing himself on the silver screen. It is probably for the same reason why he populates his characters with eccentricities and moments. He lets the characters grow on himself so that in the end, he can look back at a beautiful collage of roles that he has played and every single ounce of emotion that he has invested in them.

Trisha Krishnan Adds A Colour Of Vibrancy To ‘96

Kaathalae Kaathalae published more than a month ago, created a hauntingly beautiful effect of doing justice to the mounting suspense of the film. Trisha Krishnan adds the extra effervescence to the song, her quench to fit in a different garb of interesting characters that would expose her to the world cinema is acutely discernible from her immaculate portrayal of Janu.

In 2010, with Vinnaithaandi Varuvaayaa Krishnan’s Jessie offered us an unusual tang of a 21st-century love story. Irrespective of the age-old social prejudices that the film flaunted with a shoddily written script, I cannot help but agree that Trisha set a spellbinding chemistry rolling from the spool with her co-actor Silambarasan.

As a fan of both Sethupathi and Krishnan, let’s hope the pair brings a whiff of fresh air and candour on-screen, rising above the accepted hit/flop box-office dynamic that has so plagued the industry.