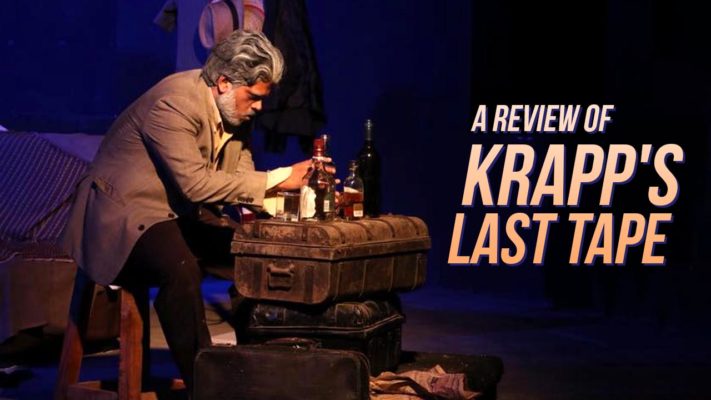 Krapp, a lonely old man, spends each of his birthdays, recording a tape for himself, a sort of personal audio log (this was written in 1958, much before the advent of podcasts mind you). Today, on his 69th birthday, he revisits the tape he had recorded 30 years ago, before sitting down to recount the year gone by. As the title suggests this is Krapp’s last tape recording.

Madhav Raj Bhatt pulled off playing a cantankerous old man with consummate ease. Measured and purposeful movement accompanied by the gruff voice of a sour man, were the hallmarks of his performance. It is no mean feat for a 25-year-old to look the part of a 69-year-old man. He had the mannerisms pat down, right down to the hunched back and unsteady hands.

The one-act play ran for a little over an hour. It had the intimate audience at the Apollo Foundation Theatre spellbound from the very first minute. With minimal soft lighting, the director set the right mood and drew the audience in.

The detailing that went into the set design was commendable, although the main desk where most of the action took place was off centre. It may have worked at Apollo but at other venues, it may well have blocked the audience’s view of the lone actor.

If there was one department that was a letdown, it was the sound design. The choice of music was a little off. Operatic tunes that ran through the entire play didn’t lend themselves to the play and were even a mild annoyance at times. The lack of sound effects like clicks of the tape recorder, rewinding and fast-forwarding of the tape added to the aural disappointment.

Do watch the repeat performance of this classic play, if not for anything you get a free banana, watch the play to know why

Watch the play as performed by Patrick Macgee, whom Beckett had written it originally for.