[VoxSpace Life] Albus : An Artist’s Perception Of Beauty And Albinism 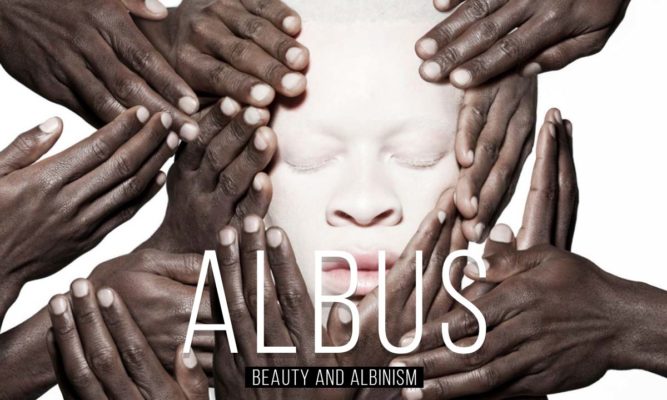 It has not been long since a Johannesburg based photographer artist, Justin Dingwall, collaborated with Thando Hopa and Sanele Xaba, both, who have the condition commonly known as albinism. Together, the duo created a photo series of astonishingly intimate and gossamer portraits and named the outstanding project, ‘Albus’.

The photographs display Hopa as ethereal and almost childlike, sometimes posing as a dazzling angel and sometimes as the unassuming figure of the Virgin Mary, but always emanating an aura that is fulfilled with flawless feminine grace. Dingwall’s vision is to present albinism in such conspicuous style that would go beyond the conventional social standards of beauty.

The fact that albinism is a universal condition, that it can affect any person belonging to any region, race or colour, and that it does not make anyone less of what he or she is in respect to one’s identity, is what Dingwall wants to emphasize on through his work.

The same philosophy of universality on which Dingwall bases his vision is reiterated in Hopa’s thoughts when she says, “I am a black girl who lives in the skin of a white person and that alone should embody what a human being as a whole should represent.”

The photographic art of Dingwall makes way for his spectators to extend and evolve their attitudes and thoughts toward the socially set norms of beauty. He believes and wants his viewers to believe that beauty comes wrapped in all sorts of sizes, shapes and colours.

With the conception of his most significant work, ‘Albus’, Dingwall looks for ways to inspire and initiate a discussion on the public forum about the taboo that surrounds the condition of albinism. Given the stigma that commonly surrounds the subject, more importantly in the African context, where people living with albinism are more than often discriminated against and are subjected to extreme violence and superstitions. In fact, in a shocking discovery, it has been seen that most people living with albinism in Africa are attributed with magical and supernatural powers that even gets them killed on many occasions.

The Perception Of Beauty Far Beyond The Conventional

Featuring over forty photographs of Sanele Xaba and Thando Hopa in ethereal photographs, ‘Albus’, investigates the aesthetic beauty and value in albinism with respect to the existing dominant and conventional beauty standards. The impeccable styling and lighting with which Dingwall captures the essential aesthetic beauty of his subjects embody a fresh and surreal elegance while simultaneously playing with the borders of the conventional ideas of masculinity and femininity.

The photograph series mirrors the artist’s passion for understanding and experiencing a condition that is marginalized universally in the world.

Talking about his vision for his groundbreaking work, Dingwall contemplates, “They are not about race or fashion, but about perception, and what we subjectively perceive as beautiful. I wanted to create a series of images that resonate with humanity and make people question what is beautiful.”

Dingwall’s inspirational work, ‘Albus’, uses particular symbols and motifs to emphasize the message that the artist wants to convey. The elements that Dingwall has used specifically for this one of a kind project add a symbolic significance behind every photograph. The symbols that Dingwall makes use of the most are snakes, butterflies and water, that have given motive to his artistic perceptions and are most significant in shaping his objective to evolve and transform the perspectives of his spectators.

Water, as used by Dingwall, in the context of a symbol in his art echoes the perceptions of the standardized society that is conditioned around the stigma that surrounds albinism. Water, which has been given the symbolic value for change now and again in literature, in Dingwall’s art, represents self-reflection. This is in compliance with the title that Dingwall provided for one of the most popular among his works –‘In With The New’ –where Dingwall reconstructs an old saying in English –“Out with old ideologies and in with a new perspective.”

Apart from the symbol of water, Dingwall uses snakes as a symbol too. The snakes can be interpreted as a symbol of transformation, a conclusion derived from the fact that snakes shed their old skin in order to let the new skin form. Again, from another perspective, snakes can also symbolize healing, making sense of the fact that Dingwall wants to heal the society of its stigma toward the albinism. Dingwall’s flawless use of the light and shadow demonstrates his careful choice of medium. In fact, Dingwall captures an out of the world reference frame while using the quintessential photographic nature.

Dingwall’s calculated use of light in the photographs is so perfect, as to almost mean the revelation of that which is unseen. Light, in the photographs of Dingwall, stand for truth and is in disparity with shadow or darkness element used by the artist for placing emphasis on the intolerant mental state pertaining to prior misconceptions about the people living with albinism.

The interest and intention of the artist lie in his desire for his images to represent the celebration of unconventional beauty, the beauty that is enhanced by a difference. Such desires are made clear when the artist emphasizes, “To me, diversity is what makes humanity interesting and beautiful.”

“As the project progressed, you will also start to notice in the newer works that I use elements such as butterflies, snakes and water. These symbolize ideas of metamorphosis, rebirth and fluidity to reveal ever-changing perceptions,” said the artist of this unconventional photo series.

Dingwall uses references of the religious figure of the Virgin Mary in his work of art in order to instil within the societal standards of beauty, a value for acceptance and purity.

When asked about the purpose behind using religious suggestions in his work, Dingwall replied, “The Mary figure featured in many of the works represents a maternal image of comfort, acceptance, protection, provision and compassion. A mother is symbolized to love unconditionally. In this way, I aim to create images of acceptance, and in celebration of uniqueness, As a reference to religion and iconography, the system of iconography is believed to contribute towards strengthening relationships between human and a spiritual realm, as a ‘representation of the holy’. I use the Marian reference to iconography to symbolize purity and acceptance.”

Albinism and the taboo surrounding albinism is a critical issue that is seldom given any thought to. In fact, it has been only recently, that it has made a place among the common discourse. Moreover, the stigma around the condition of albinism has been recently popular because of the rising awareness initiated by American models such as Shaun Ross causing for the gradual inclusion of the albinism community into the socially normalized standards of the world.

Dingwall’s work aims at bringing a revolution that would change the way in which the society views the people living with albinism.

Dingwall himself admits to this when he says, “I hope that when anyone who views the work, that they do it with open eyes and allow the work to affect them on a very personal level.” He further explains about the purpose of his vision, “I want my work to resonate with humanity and make people question societal norms about what is beautiful… My intention is to create awareness and I aim to affect the viewers’ perspective, not only about albinism but also about preconceived structural norms. I hope for ‘Albus’ to continue to move worldwide in this aim.”

‘Albus’, A Device To Bring About Revolutionary Defiance And Positivity

Dingwall’s photo series has been so well received that people are a mouthful with its appreciation –not just regarding the technicality of the work but also for the message it sends. In fact, the only member of the Australian Parliament having albinism, Gareth Ward, is all praises about Dingwall’s celebrated work, ‘Albus’, when he remarks that the photographic series of Dingwall “sends a powerful and important message that it’s okay to be proud of who you are and to celebrate and embrace our human diversity.”

He further appreciates the works, drawing on his own experiences as a child when he expresses, “For a kid who was told I’d never amount to anything much, I’m proud to have lived life to its fullest and used my time to make a difference in other people’s lives as a local member of Parliament.”

Dingwall’s work has touched more lives than we can think of and that is the kind of effect that Dingwall hoped and prayed for his work to have.

It is this revolutionary defiance and positivity that Dingwall had wished his work would radiate. Referring to this context, Justin Dingwall, the artist for ‘Albus’ claimed, “My main aim with this body of work was to portray and hopefully inspire a different perspective to foreground the myths surrounding albinism.”

Justin Dingwall is known to continue his investigation with the portrayal of “beauty in difference”, focusing on deconstructing the stigma surrounding the unconventional beauty norms. His work reflects the strong emotions with which he creates his art and poses challenges at every step to the traditional and conventional ideas of beauty.

His artistic works are inclined remarkably toward the atypical, and the roads less taken with cultural and aesthetic undertones. In fact, it would only be doing justice to him and his vision, to say that the world needs more artists like Justin Dingwall to subvert the same old traditional narratives of beauty constructs and to find beauty in the most unnoticeable and unusual of all.