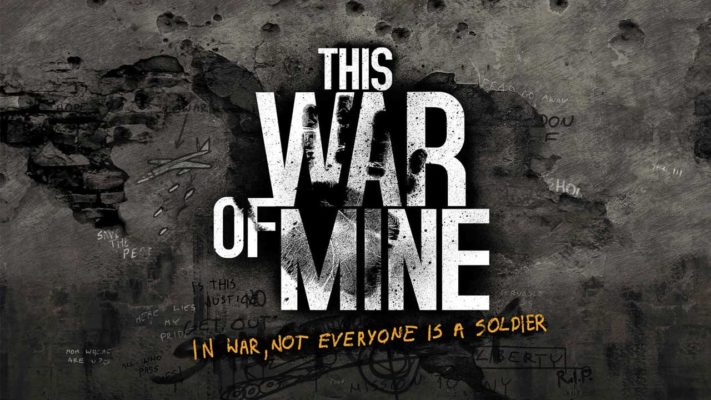 The Side Of War That We Never See

Turn on your TV, unlock your smartphone, unfold your newspaper, there’s a good chance that you’ll see some news or the other about how some country was attacking another. Although it’s been almost seventy years since the last world war, our comfortable lives have shielded us from the horrors of war happening around the world.

But it’s not just the TV coverage and news articles, war is often shown from a very narrow perspective. It’s either the aggressors or the defenders. It’s a tale of soldiers and heroics, of vanquishing someone who believes in an idea, the other side considers to be evil.

Most video games are content with showing these sides, letting you play the soldier since it’s a much easier experience to tell a story as a soldier fighting for a righteous cause.

But there’s another side to the story of war. Not just that of the soldiers, governments, and rebels, but one of the survivors. What about the people caught in the crossfire? What about the people whose homes have been destroyed, their livelihoods robbed, and have to fight every day to stay alive?

That’s what the game, “This War of Mine”, developed by 11-bit studios, explores.

For Those In The Crossfire, War Is Horror

In “This War of Mine”, you don’t play a soldier fighting for a righteous cause or to protect your homeland. You are shown the perspective of three civilians caught in the middle of a war, with their hometown ravaged. Their goal, as is yours, is to ensure they survive the current calamity the best you can.

The game has two distinct stages, one during the day, and the other during the night.

During the day, you’ll find yourself having to patch up the partially destroyed home that you’re in. You’ll need to build some basic tools, a workshop to mend broken things, a bed for your people to sleep comfortably (Make them sleep on the floor, and they’ll be tired and cranky the whole day), and maybe a distillery to produce some moonshine to keep morale up.

In addition, the day is when you’ll also have to feed and treat these people for any injuries they may have. It’s not pretty work, and through their musings, you’ll find how helpless they are. These people are strangers who have been torn apart from their families and forced to stay together.

During the night, you’ll have two of them go to sleep, while you venture out with one of them to gather supplies to replenish your stocks. And this is when the story really takes on a life of its own.

What You Do Makes An Impact

At night, you’ll be given the option to explore a variety of different areas in the war-torn city. The hospital, supermarket, school, etc, are all places which can have life-saving supplies for you. The hospital will likely have life-saving medicine which you can use to treat your wounded, or trade with other survivors for anything that you may need. The supermarket is a great place to search for food, and coincidentally, it’s also a place where you’re exposed to another aspect of “This War of Mine”.

When you explore the supermarket for the first time, you’ll hear a noise coming from a closed door. Peep through the keyhole, and you’ll find an adolescent girl conversing with a soldier.

The soldier promises to provide her with all of the supplies she may need, in exchange for sexual services. The girl, frightened and confused, just asks to be left alone. After a minute or two, the soldier will get annoyed and try to force himself on her.

This is when you have the choice to intervene or walk away. Would you try and ignore what’s happening for the sake of self-preservation? Would you try and intervene, risking your own life, to save the girl? I chose the latter and ended up getting mildly wounded by the soldier after I killed him. In her terror, the girl ran off to find safety. But the repercussions of what I had done only came to light the next time I visited the supermarket.

Another group of survivors were talking amongst themselves about how the girl was able to safely get back to her mother. It was nice to hear, and it felt rewarding to have chosen a path where I could have made a difference, instead of ignoring her and moving on with my own life.

In another playthrough, I visited the broken down house of an old man and his adult son. I was in desperate need of food and medicinal supplies, and they had more than enough. But they were not open to giving it away.

I was faced with a choice. Do I kill them and take what I need? Or do I risk my own survivors starving to death, whilst I tried to find another place which may or may not have the supplies I needed? In the end, I chose to kill them and take what I needed. But I felt the repercussions there as well. Although I was able to get the supplies I needed, my civilian who committed the act of murder was so horrified by what he had done that he went into depression, unable to eat, unable to sleep, just a shallow ghost of his former self.

It was moments like this which showed me that there are dark and depressing choices made by war survivors every day, and we never see them.

It’s A Perspective Which Needs To Be Told

Too often, media outlets are focused on the macroscopic side of a war. But the microscopic side, the survivor’s side, is what shows the real horrors of war. We can hear of thousands of soldiers dying and cities falling to bombs. But, none of us really understand what it’s like to be caught in the middle of a battle until we are actually thrown headfirst into it.

“This War of Mine” captures that emotion, and in doing so, it tries to tell the world that we can live together without strife. By showing the horrors that are committed, and the horrors that need to be committed, to stay alive in a war, 11-bit studios hope to teach the world that we need to get along, lest we find ourselves in a situation where we need to steal, beg, and kill to keep our own selves alive. Incredibly, This War of Mine aims not just to entertain, but to educate, in the hopes of creating a better world for all of us.