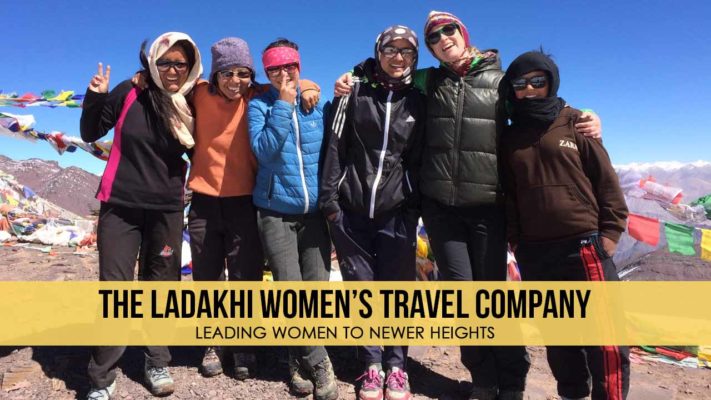 Thinlas Chorol – The Mastermind Behind The Ladakhi Women’s Travel Company

India is a prospering country, with Indian women touching newer zeniths of success every new day. However, despite such flourish in the number of working women in our country, when it comes to running all-women enterprises, there are sadly not many success stories. Honestly, even to this day, a woman has to stumble across many blocks en route to her success as an entrepreneur. And the matter worsens when she is right out there in the big, bad world, trying to achieve a goal by completely subverting the norms of gender. One such woman to make such adversity possible is Thinlas Chorol.

Born in the lap of the mighty Himalayas, in Ladakh, Thinlas Chorol is one of the most competent trekkers in the country. She has been a revolutionary figure and the mastermind behind Ladakh’s first travel company, which is owned and operated solely by women. The Ladakhi Women’s Travel Company is an inspiring travel venture that employs local women as its guides and operators and caters to the requirement of women travellers, though men accompanying them are welcome as well.

For Thinlas Chorol, trekking and hiking had been a part of her daily life since as long as she can remember. When she was a five-year-old child, Thinlas lost her mother and her father meant the world to her. Worried that she might lose him as well, Thinlas started following him into the mountains every day to graze their cattle. And thus, her tryst with long treks and mountains began. Today, as she is hailed as one of the foremost trekkers in Ladakh, Thinlas fondly remembers her baby steps into the world of trekking as “the bliss of my childhood.”

There is a saying that nothing in life comes easy. However in her case, in addition to the hard work and determination, she also had to fight patriarchy – the societal taboos, stigmas and other “regulations” – to do whatever she wanted from her life. Unlike other Ladakhi women, whose inevitable fate is to get married and live a life primarily running a household, she was determined to do something different. Understanding her passion for trekking and hiking, Thinlas enrolled herself in a professional trekking training program and became the first professionally trained female tourist guide in Ladakh.

En route to her success came advises and even warnings of not becoming a trekking guide for a Ladakhi woman going high up into the mountains for days with foreigners would not be a pleasing scenario. Despite her competence, talent and professional certification, she failed to get herself aligned with any travel companies just on the account of being a woman. However, Thinlas was not ready to give up her dreams to such rejections and taboos.

It was then that Thinlas met few women travellers, who were harassed by their male trekking guides and were searching for someone who they could trust. Thinlas grabbed this opportunity. She was also encouraged to choose her path by SECMOL (an organization helping to educate Ladakhi children from remotest of the villages) and her American English teacher, she began taking up assignments on a professional freelance basis.

It was then that she went on to attend a mountaineering course at the Nehru Institute of Mountaineering (Uttarkashi). After completing the same, she spent a semester at the National Outdoor Leadership School (NOLS) in Ranikhet, Uttarakhand, where she picked up wilderness and leadership skills. She had also worked as an instructional aide at NOLS and, in doing so, became the first Ladakhi to do so.

All her efforts paid off when Thinlas, on returning to Ladakh, opened Ladakh’s first ever all-women trekking group in 2009 – The Ladakhi Women’s Travel Company. She was just 29 years old then.

Thinlas’ objective did not get fulfilled by just opening her own travel/trekking agency. She wanted it to be completely different. Soon, she started getting approached by local women to train them as trekking guides. That was the start of a revolution. The company now has eight guides, four trainees and 20 employees. A trainee needs to take a one-year course to become a trekking guide. The guides at LWTC are also trained well to be aware of the history, local culture, flora and fauna of the entire territory so that a trekking trip with them can be enriching in more ways than one to the trekkers.

With time, Thinlas understood that just a trekking company will not relieve the women of their hassles. The local women needed a support system they could bank on during adverse times. Hence, in order to support the Ladakhi women against all sorts of atrocities, Thinlas opened the Ladakhi Women’s Welfare Network in 2013. Not only does it work towards the general welfare of the Ladakhi women but also help them to report crimes to the authorities.

Having travelled in the mountains since childhood, Thinlas was aware of how drastically the ecosystem was changing, thanks to the piles of plastic and other garbage being dumped specifically by the tourists at the trekking sites. Hence, with LWTC, she tends to follow the ‘leave no trace’ rule so that her company can do its bit to preserve the ecology as it is. They also ask the trekkers to avoid plastic bottles and refill their water bottles at the homestays.

Coming to the homestays, LWTC makes the trekkers halt at homestays specifically run by rural women. In doing so, LWTC not only helps the Ladakhi women with a way of income but also urges the trekkers to learn from the simplistic rural lives led by the Ladakhis.

Now, although there are numerous homestays, most of the travel agencies do not prefer their clients to stay with them as it comes with zero profit for the former. However, LWTC follows another rule. Its website clearly states homestays help rural women achieve the same status as their men who are out earning for their families. They also encourage people to remain in their villages instead of seeking jobs in cities.

Furthermore, homestays are also considered to be extremely environment-friendly as compared to the hotels. They put minimum pressure on the natural resources of the place and also help the local communities build a sustainable network.

Of course, there are numerous challenges faced by LWTC, such as the wintry months when they are left with almost no assignment. But, they are working together to make use of that time – and also welcome volunteers to help the women hone their language skills.

By choosing to become a trekker – to do what her mind prompted – Thinlas had sought to empower herself. Little did she know that she will one day become an inspiration to hundreds of other Ladakhi women.

While talking to The Better India, she said, “Women should think for themselves and not depend on their families. If they believe in themselves, they can achieve what they want. Women should not listen to what society is saying. They should listen to their own ability to work. Then, definitely, they will succeed if they work hard.”

And truly, her words indeed resonate with truth. You may check out the Ladakhi Women’s Travel Company’s site here.