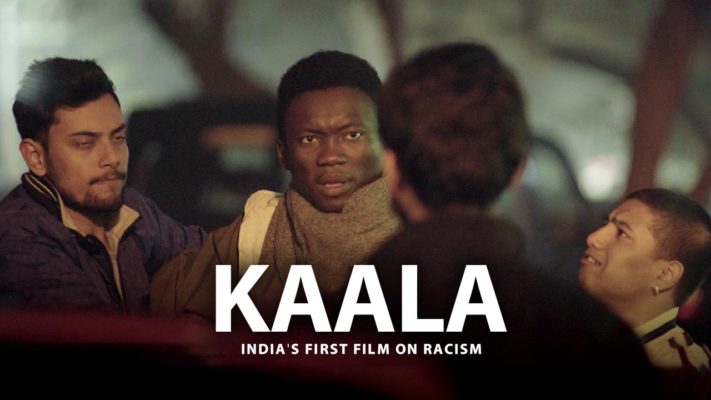 Kaala- Showcasing The Underlying Hypocrisy In Us

Drugs, guns, robbery, mugging, goons, who comes to your mind when you think of all this? What is the picture that is painted in your mind? Well, the most common answer is- A Black Person.

Films, TV, Media and Politicians always tend to portray black people like the above. They are shown as the ‘bad guys’, someone you should be wary of. But, more often than not, it is a case of racial discrimination and stereotyping.

In our own country, where we complain of racial discrimination being inflicted upon us in other countries, we tend to do the same to the people who come from the African countries, for better opportunities.

The First Indian Film About Racial Discrimination Against Africans

To show the gravity of the situation and to educate Indians and the world about it, filmmakers Tarun Jain and Nasira Khan have set out to make a film on it, titled ‘Kaala’ (black).

Kaala is about the racial discrimination against the African citizens that took place in Delhi and its adjoining areas between 2016 till mid of 2017.

The shooting of the film has been completed. The team is now looking to raise, Rs. 5 lakhs to finish the post-production of the film.

They started a crowdfunding campaign for the same and have managed to raise Rs. 2.17 lakhs. You can take a look at the project here-https://www.wishberry.in/campaign/kaala/.

8 months of research, two months of workshops, one month of pre-production and 5 days of shoot in biting cold winter nights is what Kaala is all about. The film promises to be a compelling watch both narratively, as well as aesthetically. If you feel like there’s a shortfall of good quality cinema in India, support us. Because you’ll also pave a path for other independent filmmakers trying to make good cinema on pressing current issues by showing them that they have an audience.

With the world in a political turmoil over race and religion, the filmmakers hope that Kaala will be a film that can convey to the audience a message of tolerance and kindness.

More About The Filmmaker

Based in Delhi, Tarun Jain is an award-winning filmmaker who has been involved in filmmaking for over a decade now. He has written & directed three short films, including Kaala.

His first short film ‘Aakhir/At Last’ was screened at 43 festivals all over the world, winning 6 awards and 5 nominations. He is also won the ‘Remi Gold Winner‘ award at the prestigious Worldfest Houston for ‘Best Short’.

We, at VoxSpace, are doing our bit to support the project. If you think it is a story worthy of your time and money and is a project which should see the light of the day, do help/support in any way possible.