[VoxSpace Selects] Alt Balaji : Defining ‘Urban Mass’ And Why It Is The Best Demographic For Online Content 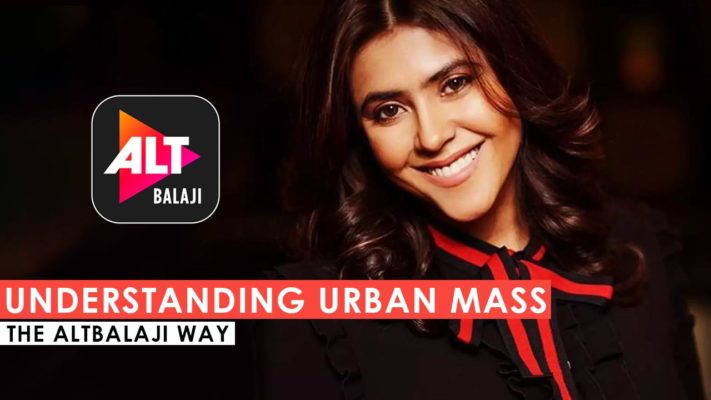 Ekta Kapoor, the queen bee of Television, who is presently basking in the recent success of her online streaming app ALTBalaji, in a recent interview spoke about identifying the demographic for her content. It was an interesting thought when she mentioned a word called ‘Urban Mass’. She went onto explain what it meant, and how her content is always catering to this specific group of viewers. Being in the content creation business, I was left pondering for a while as to what exactly this term implies and delivers in terms of its wider appeal and fruition of viewership.

Urban Mass, although the term itself has no proper academic definition as such, can be broadly understood as the migrant population. A mass, or say a section of people who have migrated to the cities, urban areas, from the interior and rural native belongings. The case in point is majorly seeking occupational opportunities, and of course academic pursuits. Come to think of it, the term itself is self-explanatory, without of course undermining the extent of rural shifters under a crude category of ‘mass’. But then, we always have indicated the urban elite as a class, and the rural simpletons as mass. So I guess it’s ok. The point which is interesting to observe here is that the ‘Urban Mass’ is the biggest and the most fertile pocket of the population of any content consumption. Be it creative content, television reporting, print media or in this case, online streaming.

To break it down, as people who are deeply rooted in their rural culture of living. And yet, on the other hand, aspire to mark their existence in the urban-ness of city culture, is perhaps a definitive case of ‘best of both worlds’. Who doesn’t love that scenario?

Of course, while it is quite simple to understand the terminology ‘Urban Mass’, a deeper and more relevant discussion would be to realize how it can be best utilized, and on the contrary, while it is being so underutilized by apps such as Amazon Prime, Netflix or Viu.

Cashing In On The Masses Vs Establishing An Elite

I remember the first time, Netflix forayed into India a couple of years back. It instantly was something that the elite could flaunt. I started seeing statuses, posts, discussions and polls, about Netflix shows and movies from the purely urbane. Notice the word purely urbane? These are the section of the society which revels and jumps in joy upon hearing the news of a new Starbucks opening in their area, or a Burger King coming to a mall nearby.

This is the section which can’t wait for the next version of the iPhone to come out or term it the ‘best day of their lives’ if they attend Sunburn or Sensation. You see, that is the set of people who were making Netflix the crown jewel of their content consumption when it first stepped into the market. To have a Netflix account was one of the most elite things you could do with your time. It differentiated you. It set you apart.

Netflix understood this strategy. Their target demographic was purely urbane, who would never think to bargain. And so, Netflix kept its subscription charges at a considerably high price. Contrast that with something like Hotstar, Prime or ALTBalaji, which were charging an annual fee at the same rate as Netflix’s monthly rate. And so Netflix became the ‘IT thing’. The aspirational luxury. The logic was everyone aspired to be elite. Much like iPhone’s market. Apple’s philosophy in putting iPhone at such high costs was beautifully defined by its founder Steve Jobs at the launch event of the mobile. He defined his target demographic as – ‘Those who will use the iPhone. And Those who won’t’.

Netflix went with the aspirational demographic. However, unlike the iPhone, people didn’t crave for Netflix. Why? Simple. One account could be shared by many. 80 percent of my friends use a Netflix account which they haven’t paid for. God knows, how many people use my Netflix!

The fact which worked for the iPhone was that it was a personal accessory, but Netflix was something that could be shared. And we Indian’s don’t really mind. Poor Netflix thought that once people watch Netflix for a while on a shared basis, they will develop a taste for it and buy it on their own. ‘The Meth Addiction’ phenomenon. That failed. And so Netflix could just never take off.

Alt Balaji’s Understanding Of The Game

Say what you may, but I’ve never seen a shrewder businesswoman than Ekta Kapoor. History speaks of her dramatic revolutionising of the Indian Television industry back in the 2000s. She singlehandedly changed the geography of content consumption of Indian Television, splendidly revived written off channels like Star Plus, Zee and Sony. Created an off-screen culture of pitch-perfect discipline, and made TV in itself accessible and enjoyable by every section of the society and not just the intelligentsia. For good, bad or worse, television became as glorious and rewarding as the film industry because of her. And so to no one’s surprise, when Ekta Kapoor announced ALTBalaji, back in 2017, people paralleled it with HotStar and assumed it would be streaming only her Telly shows.

Of course, they were there, but ALTBalaji offered something new and different for its viewer base. Erotically energized content and bold shows. She wasn’t repeating her bungalow family drama here. She understood ALTBalaji was a personal viewing experience, and therefore she went all guns blazing. Who was she targeting? Well, the Urban Mass.

Identifying the type of content Urban Mass wanted was a study in psychology. Imagine you have been brought up in a rural village or town for the major part of your life, and come to the urban cities for whatever purpose. What is the first thing you crave for in the glitz and glamour of the cities? Categorically speaking, underdog winning stories, sexual adventures with a beautiful woman, blurry imagery of the drugs-alcohol duo, and of course where in all this the protagonist is someone like you.

In real life, of course, there is a negative twenty per cent chance that someone from a rural background, who is an underdog in life is going to go to bed with a strong confident and ruthlessly beautiful woman. Fantasy is the biggest high. That is the defining trait of ‘Urban Mass’. People who are urban but not elite and who are rural but not poor. They are stuck somewhere in the cultural conundrum.

And so to define and design content for them requires careful planning. It goes without saying that India is a developing country and most probably will remain so for the next few decades. It implies that most of the people will migrate to cities, and the elite will create new cities or pockets of cities. Migration is a constant occurrence. In time to come, ‘Urban Mass’ with ample amounts of aspirational value, but with limited resources, will be the single most definitive group of individuals in the country.

And of course, a vast majority of such ‘Urban Mass’ is between the age group of 18 to 35 years old. That is the target group of viewers which any content generation company craves for. And so let it be known, Urban Mass, who crave not for Starbucks but CCD, not for iPhone but for Redmi, not for TacoBell but for Paradise, is here to stay. But then, will the content generation and consumption see a gradual shift in paradigm as the ‘Urban Mass Demographic’ grows across all streaming apps. Or will they adopt a new strategy of marketing to counter that? Your guess is as good as mine.