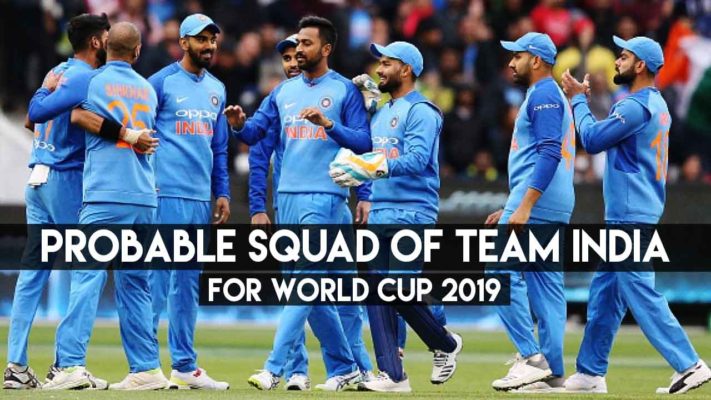 The ICC World Cup Is Here

The ICC World Cup is just two months away and all the teams have been preparing for the event for some time now. Team India’s preparations are going on in full swing as well. Many players have been coming in and out of the squad for last few series. So let’s guess what could Team India’s 15 man squad be, for the World Cup 2019 and why these players might be selected.

All the teams usually try to identify/recognize a bunch of players a year or two prior to the World Cup. They then test those players by rotating them. And team India also has done that. But luckily for team India, the core players have performed well and cemented their spot and they had just a few spots to try and fill going into the World Cup.

Team India’s batting department looks rock solid. The opening looks sorted with the right and left-hand combination of Rohit Sharma and Shikhar Dhawan. These two have performed well over the past few years. As an opener, it is important to take the pressure and give the team stability for the middle order batsmen to perform. Both of them are experienced enough to handle the pressure and come out victorious. Rohit Sharma particularly has been in good form and he will relish the additional responsibility of being the Vice Captain of the team. We know how destructive he can be and it will surely play on the other teams’ mind when they strategize against team India.

Although KL Rahul has not been in a great form lately, he is most likely to be the backup opener in the squad. After showing a lot of promise with the bat initially, he hasn’t been as consistent as he and the team would have liked. But the selectors see him as a long term asset and back his skills and temperament. Along with being the backup opener, he can bat at the 3rd or 4th position in the batting order too, if any other batsman is injured.

The number 3 spot is cemented and owned by Virat Kohli. He is the most feared player in the squad. And given his track record, he will be the key player in the batting line up who has the potential to make a big impact on the game. Also, he has done well with his captaincy over the last few years and he will be aiming to add another achievement to his name.

Next is the number 4 position which has been a musical chair of sorts for team India. The position has been a big issue for team India over the past few years. Since the World Cup in 2015, team India has tried to fit in players like Yuvraj Singh, Suresh Raina, Manoj Tiwary, Ajinkya Rahane, Manish Pandey, KL Rahul, Hardik Pandya and Kedhar Jadhav in that crucial position, but in vain. Most of them didn’t get many chances to prove their calibre for this position. And some of them couldn’t utilize the opportunity they got.

The selectors and team management have now identified Ambati Rayudu as the ideal number 4 batsman for the last couple of series and have backed him to fit in the role. He has been in and out of the squad owing to injuries, dip in form and selectors trying different options. But he has come back and has done well in patches. His batting does look scratchy at times but looking at his performances in the last few series, he looks like he can fit in the role and contribute towards the team’s win.

Moving on, the number 5 spot will be acquired by MS Dhoni (MSD). Although he will be used as a floater depending on the situations, he is most likely to bat at number 5. The amount of experience MSD has, he is an important link in the batting department. He can easily play the waiting game if the team lose early wickets or can accelerate if required. Also his immense experience and incredible skill of reading the game will help the team overcome different challenges. He is also an important member of the leadership group and Virat Kohli will seek his advice during those pressure and crunch moments.

MSD will be donning the role of wicketkeeper as well. For the backup wicketkeeper position, Rishabh Pant and Dinesh Karthik are giving a tough time to the selectors. The past few months, both the players have been groomed to be finishers as well. And whoever gets selected among these will likely be the backup option for the number 4 position as well.

I personally feel Dinesh Karthik is the right man to go with as he can not only play the finishing role he can also anchor the innings if and when required. Also, the vast experience he has, it will give the team an edge in situations of pressure. He has been decent with the bat in last few series. He has failed to cash in on the opportunity at some occasions but has contributed in the team’s win as well.

Having said that, Rishabh Pant is an amazing asset as well, he has proved his mettle in the test matches. But, he is still new at this level and has to learn to be patient while batting and needs more temperament. But looking at the recent statement made by one of the selectors, that Pant is a left-handed batsman who gives the batting order a variety, I think selectors might be tempted to go with him.

Art Of Finishing And The All Rounders

Next in the batting order comes number 6 and 7 in the order. Most teams try to fit in players who are all-rounders and can also finish the innings with the bat. And team India too will be aiming for the same. A couple of years back MSD used to relish this role, but now since he has moved up the order, team India has identified Kedhar Jadhav as one of the finishers in the team. Along with his batting skills, his slinging off-spinners makes him an asset ensuring that not only will he be in the squad, but he will also be featured in the playing eleven as well.

The number 7 spot will most likely be taken by Hardik Pandya. He can hit well with the bat and also provide those crucial and disciplined overs with his medium pace bowling. Although I feel Vijay Shankar is the right man to be a backup for this position, the team will most likely go with Ravindra Jadeja as the all-rounder backup option.

After the 2015 World Cup, the Indian team management and the selectors recognized that the Indian spinners Ashwin and Jadeja were not much effective during the middle overs. And this made selectors look for other options. Their search ended with Kuldeep Yadav and Yuzvendra Chahal. At that point, both these players performed well for their respective IPL teams and the First Class matches. Add to that, both of them are leg spinners which give them an extra edge over the finger spinners. Hence they were drafted into the squad immediately. And what a move this turned out to be.

This new spin duo, KUL-CHA (as they and the fans refer to them as) didn’t take much time to get into action. They started turning matches (pun intended) in their favour. And now they are the most lethal pair of spinners in world cricket. These two provide the team with control over the run flow and also take wickets during those crucial middle overs. These two are the spinners who are going to feature in the world cup squad for sure.

Ravindra Jadeja is most likely to be in the squad as well. He can be the backup spinner and fit in the team as an all-rounder if needed. He has been in and out of the squad consistently but, has performed decently in whatever limited opportunities he got. Also, his inclusion will allow the team management to go with different team combinations if required.

There was a time when team India struggled to produce good pacers. But now it’s different. The bowling department will be spearheaded by Bhuvneshwar Kumar, who has been incredible over the past 3-4 years. He brings in experience to the table. His calmness in pressure situations is an asset to the team. He can be effective with both the new ball as well as during the death overs. Along with this, he is pretty handy with the bat as well.

Along with Bhuvneshwar, the team has one of the most deadly death over specialist in Jasprit Bumrah. What a find he has been for team India. He is someone who can get wickets at any point in the match. He is the X factor of the team and he will be someone who is going to contribute majorly to team India’s World Cup journey.

Apart from these two seasoned campaigners, there is one slot left for another fast bowler. He can either be the third seamer in the playing eleven or backup option for the two pacers. Team India has tried a few options like Umesh Yadav, Mohammed Siraj and Siddarth Kaul. But the two players fighting for this spot are Mohammed Shami and Khaleel Ahmed. Both these players have been given many opportunities over the past few series. They have done well and have made impactful contributions to the team.

In Khaleel Ahmed, the team has a left-hand pacer who has shown how lethal he can be. But in my opinion, Mohammed Shami will be picked over Khaleel as he is more experienced, has a good rhythm with his bowling and has been a seasoned performer of the team.

These players are my choice for the 2019 World Cup squad. But you never know if the selectors throw some surprises and make some out-of-the-box decisions. Whatever the squad is, at the end of the day, I just want team India to lift the cup again. All the best team India.