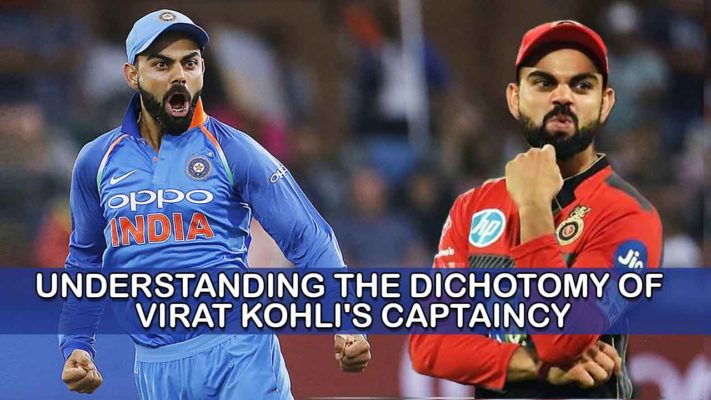 When we talk about Cricket today, one of the biggest names which comes to mind is Virat Kohli. Virat Kohli is the modern day legend of the game. He has completely redefined batting, especially while chasing a score. The way he dominates any situation and the opposition bowlers while batting is incredible. He has been doing that for some time now and the massive number of records he has broken shows what all he is capable of.

Along with his batting prowess, he has been leading the Indian Cricket Team for quite some time. He has been quite successful with his stint as the captain of the national team. But there are few chinks in his armour when it comes to leading Royal Challengers Bangalore (RCB) in the IPL. Let’s get into the depth of it and try to understand how Virat’s captaincy differs from the Indian Cricket Team to RCB.

Virat Kohli took over as captain from MS Dhoni across all formats of the game. These are really big shoes to fill and Virat has done a splendid job over the year. Fortunately for Virat, Dhoni is still around in the limited overs format, guiding Virat and helping him mould himself into a better captain. Similar to Dhoni, under Virat’s captaincy team India has broken many records and has been in the top ranks across all formats.

Be it winning a bilateral ODI series for the first time in Australia (early in 2019) or thrashing South Africa in their own backyard (in 2018) and winning the first ever bilateral series in South Africa, Virat Kohli is creating history and showing his mettle as a captain.

Virat Kohli’s record as the captain at the international level has been soaring. But, he hasn’t been able to replicate the same while leading RCB. He has been leading RCB for 6 years now. Although he has led the team to the finals only on one occasion (in 2016), he has never won an IPL trophy yet. Moreover, in spite of being the lead run machine for RCB, he has not been able to inspire the team with his performance.

So what is the difference? What is changing or lacking when he is leading RCB?

Virat Kohli has an asset in the form of Dhoni when he is leading the national team. If there is a tricky situation, he can easily fall back on Dhoni, for his expert advice. This luxury allows him to experiment more with his captaincy. But Virat doesn’t have the same luxury while leading RCB. Although, players like AB De Villiers and Chris Gayle have been in the squad, with whom Virat can consult and discuss, the impact Dhoni has is different.

The rapport and the understanding that Virat and Dhoni share is different. Also, both of their thoughts align more, when compared to others. Virat is more of a reactionary captain. Virat reacts according to the situations, while MSD asses the situations and comes up with a game plan for the forthcoming situation. This helps Virat get a different perspective from MSD.

The players in the Indian team have been together for a long time and know each other in-and-out. The comfort they have with each other is high. Since the team constitution has been the same for long, the players know their responsibility well. This makes Virat’s job easy. He just needs to guide the players towards the same goal.

But it’s different with RCB. Although the franchise and the team management tries their best to get quality players and form a balanced squad, you always have players who can be a liability, owing to different circumstances and team combinations. You might wonder that every team in the IPL faces the same conundrum. True, they do. But, somewhere I feel that RCB has never been able to strike the right balance. Apart from three or four-star players, they are not able to find players who can change the game on their own. This is one major factor which affects Virat’s captaincy.

These are the different factors which make Virat Kohli a better captain while leading the national team than while leading RCB. I hope that Virat overcomes these factors and shows that he is ready to be a successful leader in any format of the game.

All the best Virat Kohli for the upcoming IPL and World Cup 2019. Cheers!

Related posts:
[VoxSpace Selects] Varun Grover : A Viking For All Things Artsy
VoxTalks With Tejaswini Pagadala : Of Painting The Socio-Political Landscape Of India With The Biogr...
Musician Huang Draws Unicorn Shape With His Music Notes And Internet's Freaking Out