The Sachin Vs Virat Fallacy : An Analysis Of Why The Little Master Redefined The Economics Of India 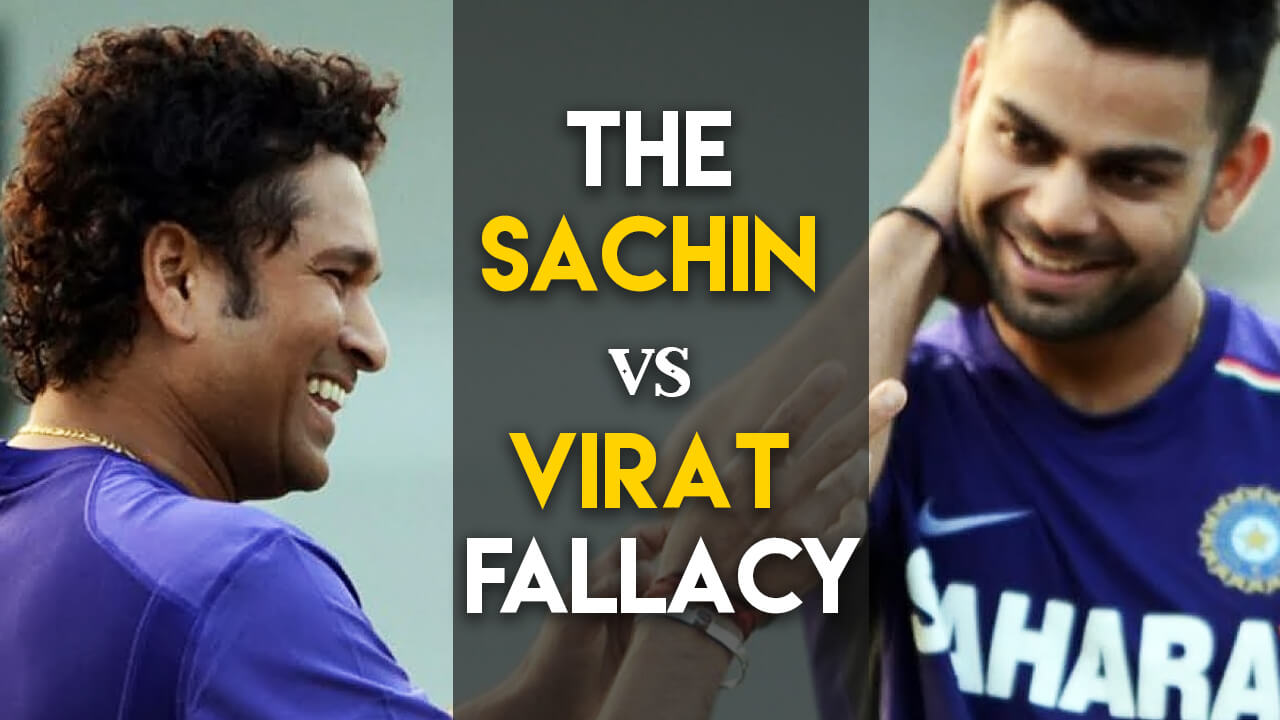 Over the past few years ever since so after the great Man Sachin)! retired, I’ve been hearing an awful lot on how Virat Kohli is better than Sachin Tendulkar. I understand comparisons are very natural and every passing generation quietly awaits their next hero. But how realistic is it to compare the little big man of Indian cricket! The phenomenon! The god of cricket! with Virat Kohli or anyone for that matter? Virat, no doubt is a wonderful batsman and is making rapid strides towards the league of extraordinary cricketers. His form over the past few years is nothing short of extraordinary. He has chances of achieving a better career graph than Sachin Tendulkar if he somehow manages to remain injury-free. When I say chances I mean very bleak chances.

Statistically, Virat might be ahead at the moment but what people fail to acknowledge is the fact that he needs to do the same thing for at least another 15 years consistently in both the formats. He is very young now and reflexes are bound to slow down with age. He is yet to prove himself on the grand stage, the Test format.

But wait! Is statistics the only measure of true greatness? Why are we so fascinated with numbers? Was Sachin what he was only because of the century of centuries? What makes Sachin the God of cricket?

Sachin Was A Unifying Force Beyond Cricket And Records

India as a country after Independence was looking for a hero whom they can cling on to, someone who unites them as a nation. We had just realized that we as a nation are something. And in came the little man with his squeaky voice and curly hair who would rule the cricketing world for over two decades and who brought a nation of billion people to a standstill! He could stop time in India such was the aura of the little man.

Unlike other personalities in India, Sachin was not just a hero, an icon or a superstar. He was an emotion!

Between the time Sachin made his debut and the time he retired, we have had 10 governments that changed, television has reached each and every household. You could see how India was growing though Sachin’s prism.

We belonged to a nation which was always trying to grow back then and had to conquer trying circumstances each day, and in such times Sachin gave us happiness and hope. He gave us reasons to forget our difficulties.

India in 1991 was a limited economy, at times we were also staring at an economic collapse. Sachin during such times brought in the people, the money, and the business.

The Global Phenomenon Of Sachin Tendulkar

Sachin was the first International player to play for Yorkshire when they broke a 128-year old tradition just to let him play for them. BCCI used to pay INR 5,00,000 to Doordarshan to allow the telecast of the Indian cricket matches. But after Sachin’s batting exploits outside India ESPN had bought the telecasting rights from BCCI at $ 6,50,000. Money just kept flowing in. Sachin was the central figure in this journey of liberalization and telecast revolution.

When Sachin made his debut, against Pakistan in Karachi, India had around 30 million television households, but it now has around 180 million. Sachin is what Indians want to watch on television and that is why so many bought one. Under the little master, India’s economy revved up for a historic growth spurt, he had become a routine on Indian billboards and commercials as he was at the crease.

In 1995 he signed a deal with WorldTel, a telecom company, guaranteeing him $7.5m over the next five years. That kind of money was never heard of in cricket. He is not merely one of the most adored living Indians, but also one of the richest.

He had all the qualities of a middle-class man, he never ran after money. He was just in love with the sport and the rest, as they say, is history. This is the prime reason why he was loved by the entire nation. We were so connected to him, we felt all the runs he scored were our’s, we wanted him to succeed. We saw our success in his success.

Post Sachin – Was There Ever A Question Of Replacement?

Post Sachin’s retirement everything about the sport has changed. He used to single-handedly handle the pressure of a billion people and to do that for 23 years consistently takes some doing. Over the years cricket bats have evolved, the rules have evolved, which have allowed runs to be scored very easy, and most importantly the bowling attacks have changed. In the midst of so many changes, the spectators have also evolved. They do not watch cricket with the same intensity anymore. The drama, The emotion, and the tension have all diminished.

Childhood was fun for me and Sachin made it more memorable. How many of us reading this, have actually bunked school, college, meetings, and exams for this guy?

To play under the pressure of an entire nation on the shoulder is something Virat has never experienced and he quite possibly will never experience. He has a team of equally talented players and they can perform on any given day. While for Sachin, he played with less than a mediocre team for close to a decade. So all the expectations were only from him. We used to switch off the television sets after he was dismissed. Such were the expectations from the little genius.

Heights Which No One Else Can Reach

When Sachin makes runs it is pure poetry, we love watching him. We can’t have enough of him. Virat, on the other hand, is scoring runs but looks like a robot. Mind you, I am in no way demeaning his talent. It’s just that we are so used to see those beautiful straight drives, those delicious cover drives, those cracking cuts and pulls from the Master that we cannot see anyone else.

This generation which is so obsessed with flashing blades and long sixes needs to know what cricket originally was. A “Gentleman’s Game” and Sachin personifies it.

It is we the people who draw such comparisons, while Virat in all his press conferences and interviews clearly mentions that he can never be Sachin. Sachin’s cannot be made, they are born.

Just like Sachin had predicted Rohit and Virat might break his records, I wish Virat does well for himself and the country. I wish he breaks all of Sachin’s records. But for me and to a billion other Indians Sachin is, was and will be the ultimate GOD of Cricket.