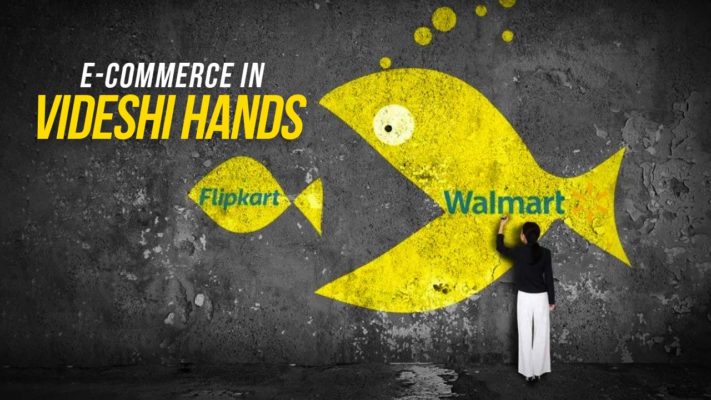 From A Market, To ‘The’ Market

It is one of those stories that made you feel good and made you believe that true entrepreneurship will prevail against adversities and eventually triumph. Yes, I am talking about Flipkart – the homegrown e-commerce giant; till it wasn’t.

In the recent years, there has been a visible global shift when it comes to India. From a country that was looked at as one more market in the list for global behemoths, it has now come to the forefront as a country that deems special attention. This is because after China shutting its doors, India is the second largest consumer market, which is growing at a steady pace. Therefore, from being in the hinterlands to becoming the prime real estate has been a short journey. Everybody wants a piece of the Indian profit pie.

E-commerce is a sweet spot. Running an e-commerce business is extremely challenging in India; it’s not a country like America, where people have now been accustomed to online shopping. India still relies more on its brick and mortar stores, as they find it easier to trust, than an app. It’s more about physically getting to see the product, paying for it and then taking it home the same day. However, with time things change, the need to adapt also rises and soon enough we have e-commerce rearing its head. The risk is considerable, as you would first have to make a nation understand what e-commerce is, then you will have to lure them in with hefty discounts and then you have to make a loyal recurring customer out of them. However, the payoff is huge in the long run – a country, whose demand is escalating on a yearly basis, relying on you for their supply.

The “Make in India” tag sat proudly on Flipkart; it’s a homegrown giant with humble beginnings. The journey has been full of sweat, failures, learning and moving on. Sachin and Binny Bansal started their Flipkart journey back in 2007 with the promise to deliver books anywhere in the country. The initial investment that the two had managed to rake up was 4 lakh rupees.

To promote this business of theirs, as Sachin Bansal recalls in one of his interviews, “We used to…hand over Flipkart bookmarks to the people coming out of the shop. In order to make sure that our targeting was right, we would give bookmarks to only those who were coming out with books in (their) hands – people who have made purchases.”

Every behemoth has its humble beginnings and Flipkart is special because it started from almost nothing and over the years, doggedly became one of the biggest Indian start-ups. This was “Make in India” that everybody talked about; the crown jewel of the entire game. Two Indian guys, who started from nowhere fighting against Amazon with their “desi” ingenuity, and that made excellent headlines. Jeff Bezos might dump money in the Indian leg of his business, but it didn’t matter because Flipkart knew the pulse of the consumers. Moreover, in this highly cash-intensive business both of them were pulling their weight. One is a well established online behemoth and one is a company run by two guys, who started with 4 lakh rupees and were promoting their business via bookmarks. You don’t get to see these kind of stand-offs every day.

It came out of nowhere and it did hit hard. Walmart was buying the majority stake in Flipkart, 77 percent to be exact. It took some time for people to realise two things when this deal came to light. First, India has indeed become the prime e-commerce real estate and so much so that a traditional juggernaut wants to barge in the market in the hope of making a profit and is ready to pay an astounding amount for it. Secondly, the only true Indian e-commerce start-up that was fighting the major players got sold. If you look at an excerpt from the transcript of the deal, which was published in the Walmart’s site, and read between the lines, you will realise it’s a testimony of two things -one, how important India is, and two, what Flipkart, our “desi” start-up, had managed to achieve.

Let me break it down for you-

1) A huge market with impressive growth

2) An e-commerce giant with strong roots

3) A sound ecosystem that knows all the cogs of the country.

This Is A Bittersweet Ending

At one end, there is a reason to be happy that India has now become the prime interest of the world and now they are ready to do all it takes to cater to India. From getting products that were hand-me-downs from the other major markets, we are getting “Made for India” exclusives that cater to our individualistic needs.

At the same time, there is a reason to be glum knowing that from now on, the Indian e-commerce scene will be operated mainly by outsiders like Walmart and Amazon. The “Start-up India” has pattered out, because one of the pillars that were holding it till now was Flipkart, the true blue Indian e-commerce giant. Now with it changing hands, we have let go of one of the biggest lucrative sectors at least for the time being in the hands of foreign players. Let that sink in for a moment because once the euphoria dies and the dust settles in, questions are bound to rise. Is the “Make in India” initiative dead? Is Start-up India slowly biting the dust? Because if one of the most lucrative markets is out of our hands, what happens next? Two giants remain, holding on to two more pillars, one is Ola, the ride-hailing platform and the other is Paytm. Both of them are allegedly being heavily sought after by foreign players. Once one of them gives in, the fall is really going to hurt. Flipkart set in motion the Indian start-up dream with its wake; it wouldn’t be amiss to mark that it’s changing of hands is a premonition for the end of it.