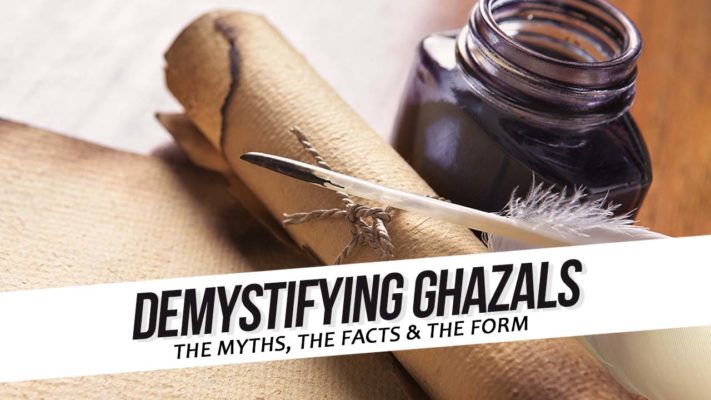 The Magic Of Ghazals

(Although in anguish, even if it is to hurt my heart, come!
Come! Even if it’s only to abandon me again, come!)

(When I saw you, this thought arised,

Life is the strong sun, you are the dense shade)

If you do, then you know the power that a ghazal holds when sung with the right chords. And if you have little or no idea of what I am talking about, but still admire soft melancholic music, then my friend, I advise you to give it a try. I was fortunate enough to have been exposed to this world as a child, as I slept to music playing on the cassette player in the 90s. It’s a magical spell that can numb your soul, giving you a sensation of a surreal icy night with dim luminosities. It can elevate your spirit like the finest wine. Whether you are into ghazals or not, there is a good chance that you have some misconceptions. Although popular, there are prevalent myths about this beauty among most. Let’s lay it bare for you –

Exploring the Myths and Facts about Ghazal

Myth – Ghazal Is A Form Of Music

The fact is that Ghazal is a form of poetry and not music. Originally, it was recited as a form of poetry. All over the world, it is still widely recited only as poetry, by the poets in various mushairas (poetic symposiums). It later fused with music into a popular form of light melancholic singing, which we are quite acquainted with, thanks to the efforts of Begum Akhtar, Mehdi Hassan, Jagjit Singh, Farida Khanum and Ustad Ghulam Ali. The likes of these singers also sing nazm, dohe, thumri and other forms of poetry in a similar genre of music. That this form of music is called ‘Ghazal’ is a myth. Myth – Ghazal Is A Form Of Sufi Music

The fact is that a ghazal can be Sufi, but all Sufi songs are not ghazals. Also, all songs which have the word ‘maula’ are not Sufi. Sufi is more of an ideology and more often expressed in a musical ‘Qawwaali’ than a ghazal.

(Thousands of desires are such that each is worth losing breath.
Many of them I have realized, yet I yearn for more)

This is a couplet from a famous ghazal written by Mirza Ghalib the 18th century.

More than a century later, in 1988, Jagjit Singh gave his voice to this classic in Ghalib’s biographical television series made by Gulzar, played by Naseeruddin Shah and made it known across the world like never before.

Exploring The Form And The Craft Of A Ghazal

Javed Akhtar metaphorically describes a ghazal as a box of assorted biscuits. He calls it so because of its unique structure, which has different flavours packed in a singular box. 2 lines make a couplet (Sher). More than 4 couplets together make a Ghazal. Each couplet is exclusive, independent of other couplets and is complete in itself.

Every single couplet of a ghazal may be about an entirely different topic and yet, has to deliver a comprehensive thought as a whole. This makes it differ from a Nazm.

So, what binds this variety of thoughts together in a Ghazal? It’s Meter (length of line – Behr), Rhyme (Qaafiya) & Refrain (Repeat words – Radeef) together form the syntax of a ghazal.

Myth – Ghazals Are Written Only In Urdu

The fact is, when the ghazal originated it was written in Arabic, then moved to other languages like Persian, Hebrew and Urdu. Today, ghazals are written in Hindi, Gujarati, Marathi, Punjabi, English, German and several other languages. Dr Ghazal Srinivas is known as a pioneer of Telugu ghazals. It can be conceived in any language, although the most popular is Urdu.

Ghazals focused on love in the earlier days, lekin aur bhi ghum hai zamaane mein mohabbat ke siva (but there are several other tragedies in life apart from love). The thought carried by ghazals has evolved over the years by the inherent social awareness of the poets. From philosophy to a rebellious and satirical take on the social issues, some ghazals have outlined the liberal thought, taking a jibe at fundamentalism and sometimes to outright irreverence to religion.

Frequently used words have their symbolic meaning. Maiqana (Bar), the maiqwaar (drinker), haram (place of worship), waiz (preacher) and many such are often used metaphorically. As Ghalib says in one of his ghazals –

(I know the truth about paradise, but

if this fable provides comfort Ghalib, the thought’s not bad)

The Mystique Aura Of Ghazal

(What we call as the world is a magical toy

If found it is earthen, if lost it is golden)

However deep we delve into the world of ghazals, something that we fail to demystify is its mystique aura. There is an old lady known as amma, who sits at her small kirana shop at the end of the road leading to my house. She knows nothing of the form, origin or the contribution of ghazal to literature and society. Yet she listens to them every lazy sunny afternoon and late evening. She says that it takes her to another peaceful world, a symphonic world of nostalgia and love, and makes her forget about her daily worries and chaos of this life.

Related posts:
[VoxSpace Life] Motherhood - A Compulsion That Should Have Been A Choice
[VoxSpace Selects] Black Mirror’s Smithereens – A Tale Questioning Our Over Dependency On Social Med...
Anatomy Of Dwandwam : What Makes This Indie Feature The Best Telugu Film Of This Decade