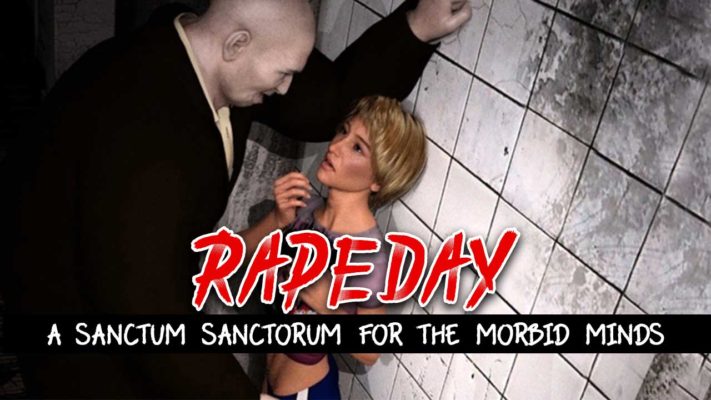 Steam was particularly clear about its target audience of Rape Day- sociopaths, apparently 4% of the general population. Rape Day, the video game supplied by Desk Plant, had assembled the perfect elements of a zombie apocalypse- rape, abuse, and cannibalism, to sell its content. The player needs to participate in a series of non-consensual sex and torture to progress. Following the subsequent spurt of backlash from activists, petitioners and NGOs, the game was pulled out from Steam. But does it solve the immediate crisis at hand? There is too much to absorb from Rape Day patterned after a visual novel with rape scenes constituting just a fraction of its macrocosm. The developer had previously removed a scene with ‘content that exploits children’.

As a matter of fact, researchers have remarked that what starts as a simulation by advanced 3D graphics, flourishes into a debilitating compulsion in most gamers. At this juncture, technology is coming to be an existential threat in itself, the consequences of which will not remain confined within the gaming addicts alone.

“Moral outrage does not stop the entertainment industry, it slows it down but in time society progresses and realises that the purely fictional things they thought would cause moral decay and widespread lawlessness, in fact, do not,” Desk Plant argues.

Rape Day Had Every Possibility Of Spreading Like An Epidemic

The sheer fact that Steam had a particular segment of users in mind is a convincing lie. At the end of the day, video games dart from one PC to the other on its potential to rouse adrenaline rush using its interactive experience, scheming a fantasy world you would not want to leave. Steam applied reverse-psychology by announcing that Rape Day is not designed for the majority. By doing so, it had already captured the imagination of thousands and has simultaneously simulated an unwelcoming virtual space that progresses on the veracity of macabre in human beings.

In a parallel universe, considering Rape Day had seen the light of the day, its gaming experiences would have propelled thousands to summon their sexually sadistic elements as a crucial part in Rape Day’s totality. It goes without saying that the revolting gaming experience would never have confined within the mindscapes of its intended “4% sociopaths”.

The volatility of the gaming world is both outraging and unpredictable at the same time; one cannot deny that it leaves a biased influence on the marginalised population, be it LGBTQ, women or children; pushing them towards torture, verbal abuse and trolls. After all, who’s there to monitor?

“If you’re a player, we shouldn’t be choosing for you what content you can or can’t buy,” Steam to media.

Contextually sensitive video games invariably glorify sexual violence and aggressive behaviour in players. Game narratives are smug with the gruesome and beastly, and are slowly reaching out to the gamers who are not bothered about the toxicity of gaming communities. Video games have so much realism in their art that addicts do not consider the falsity of their premise.

Big brands trick players into contributing to this fabricated world of depravity where players’ original identity or sexual orientation has got nothing to do inside the game. Within the accepted narrative of video games, including Rape Day, gamers are normalized to physical torture and filicide. What remains potentially dangerous to society is the shared experience of these gamers, who are daily engaging in this invigorating journey of rape and torture.

You don’t need to be tech-savvy to grasp the rhetoric of toxic video games, especially now, when constructive criticism on games and the spectator-player relationship has become another click-bait. The row over Rape Day and its ethical implications, irrespective of the fact that murder and abuse are habitual indulgences in both fiction and TV series, is a cue to understand the disparity between the two platforms.

Violence on TV is passive to the extent that it does not require viewers’ immediate response. Video games like Rape Day can be extensively demanding, giving players the upper hand to control the entirety of a “menacing serial killer”, as Steam had put it.

“In this game, a player takes the first step to creating violence. The player is no longer just a spectator. He’s an actor in the process,’’ Dr Driessen, a behavioural psychologist to the New York Times.