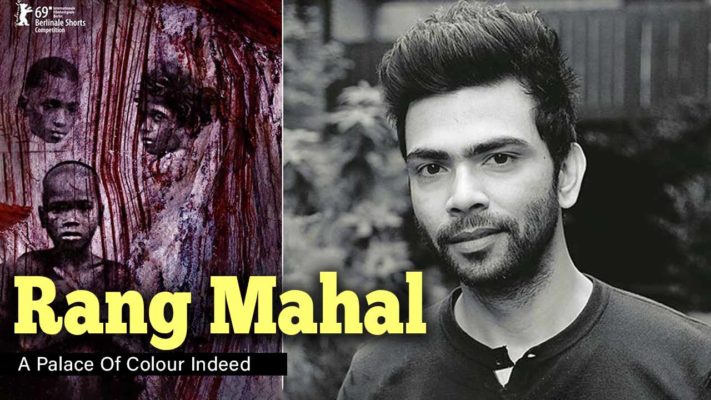 While the star-studded cast and performance of Zoya Akhtar’s film, Gully Boy, won over millions of hearts at the 69th Berlinale; Rang Mahal, an Indian short film of 26 minutes grabbed its fair share of applaud at the same. Rang Mahal is directed by the inimitable Prantik Basu, who has been an active participant of the Indian film community and is in fact not a stranger to the standard film festivals of such stature. Besides the Berlinale, Basu has had the opportunity or rather the much-deserved honour to screen his films at prestigious events like the Rome Film Festival, Oberhausen, International Film Festival (IFF) – Goa, Rotterdam Film Festival, Kochi-Muziris Biennale, and Experimental-India.

Rang Mahal is set in the district of Purulia in West Bengal and upholds the traditional ways of life of the tribal community of the region. The film’s focus is placed on the ways of life of the Santhal tribe, located in Purulia, with an interpretation of their relationship with nature, forestry, and issues surrounding climate change and deforestation.

In Basu’s own words, the selection of such a film commenting on the tribal life that is in a constant struggle with the contemporary modern life in the urban scene is like “a pat on the back.”

Not many people receive their due recognition while travelling the road less taken and Basu is grateful to have been found when he says, “My films are experimental, like narrating a film essay. It’s not easy for filmmakers like me who don’t make conventional films to be noticed. So this is inspiring.”

The Genesis Of The Palace Of Colors

Against a rocky background, a camera pans out carefully and slowly on the rocky hills, as a Santhali woman narrates their myth of the origin of the creation and how the first Santhal home was built, “In the beginning, there was only water, deep endless ocean. Half asleep Thakur Jivi had a dream, it was a vision of what Earth would look like.”

Approximately seven hours away from Kolkata, taking his inspiration from a remote hill on the border of Bengal and Jharkhand, Basu has turned his encounter with the fascinating Santhali tribe into a mesmerizing 26 minutes experience on the screen.

Basu elaborates on the inspiration of his film further as he says, “Most of my ideas stem from landscapes or locations. I have been making a feature-length documentary in Purulia for the past three years now. It was during that shoot, I came across the colourful chalk stone hill where rocks are used by the local Santhali community to make murals and paintings on the walls of their houses for their annual festival of Sohrai. My film takes a micro look at this unique correlation of nature and culture and attempts to present a parable-like the tale of an existing ecological art at the threshold of extinction.”

According to Basu, the main reason behind the Santhalis’ painting of the house walls is to fill in fissures, that is, in the tribe’s culture, often considered to symbolize prosperity. Basu claims to have left certain subtle traces in the Rang Mahal, that deals with the gender politics seeped into the layers of this particular community.

Until recently, the Santhali tribe had no written language of its own. Therefore, the tribe has in the centre of its rich culture a treasure trove of myths and tales that have continued to be passed on through generations in the oral form. Almost every version of the myth is coloured in different hues, much like the various versions of colours on the rocks that inspired Basu.

Basu’s Rang Mahal is layered up with different levels, each pointing out to a different direction, every time one dares to assume that they have had a hold on it. In other words, Basu’s Rang Mahal culminates into a myth in itself, while trying to paint a picture of the Santhali myth of creation to the world.

Thus, when talking about the layers and the form of his film, Basu claims, “Every film brings along its own inherent form and rhythm. As a filmmaker, I try to recognise it and work towards it. I am intrigued by folklores and often try to interpret them in my work. There are many different versions of the Santhali creation myth. I asked some people from the community and they revealed that since these myths pass on orally, they vary in their telling and retelling. I was fascinated by this idea, of having various versions of the same story. While this became the aural layer, I started to build upon the image layer with rocks, hills, trees and the village, sometimes in direct relation to the story, and sometimes leaving it open-ended for the viewer to interpret their own version.”

The Price That Nature Pays

Justice would not be done to Basu’s creation if one does not praise his ability to convincingly use rocks as metaphors through the entirety of his film. While Basu has shot most of his Rang Mahal in the villages of Dungridhi, Malti, Amruhasha and Icharih in Purulia, colourful patterns on rocks are a constant visual in the film, that almost naturally seems like artwork. What Basu aims at doing is to masterfully bring upfront the impermanence of this art, while commenting on the urban gaze that is privileged and ignorant of the loss of such artful tribal culture in the face of rapid global urbanization.

This is evident when he says, “The rock patterns there are so unique; they are artworks in themselves. The impending impermanence of this little known structure saddens me. While we hear the story of how the earth was formed by putting layers upon layers of soil, we see men digging and taking away soil in their gunny bags. Will the hill seize to exist one day? What will happen to the ecological art of making paintings on the walls of the huts with natural pigments? To an extent, it is our privileged, urban gaze to lament on the loss of tribal culture. That is why I chose to stay away from the anthropological concerns and took a more ‘geological study’ approach in my visual narration. It also added an interesting contrast to the fantastical way in which the story is narrated.”

The Classic Never Goes Out Of Style

Basu’s love for antique techniques in filmmaking is made evident by him when he comments on his style, “I love classical cinematic devices. Since they are not much in use these days, they come across as more stylistic or ‘experimental’. On the contrary, they are the most effective transitions, if used well. It goes well with my theme as well for I am telling a tale that is primitive. Hence using these ancient techniques were a natural choice.”

Furthermore, while talking about the accessibility of his film with respect to the general audience, he believes that the simple style of his film makes his film accessible to any strata of the audience, in contrast to the contemporary multiple complex narratives. He wants his film to be an experience that tugs at one’s humane streak –“All my works are very accessible, I feel. One just had to be patient and devoid of judgment while viewing them. For me, cinema is not about understanding or decoding a formula that will derive the same result every time one watches it. It is more to do with feelings and evocations, things that words often fail to express. It goes beyond storytelling. If I were just to tell a story, I’d rather write a book.”

An enthusiastic artist of a filmmaker, Prantik Basu hopes to create a revolution in the cinema world with films that push the audience to pause and ponder on issues that require attention.

Basu’s next film Dengue is a feature film receiving funds from the Netherlands. In Basu’s own words, “It is a subaltern romance set in a rain-drenched Calcutta.”