[VoxSpace Life] The Sorry State Of Online Sex Education : Are We Appreciating The Right Content? 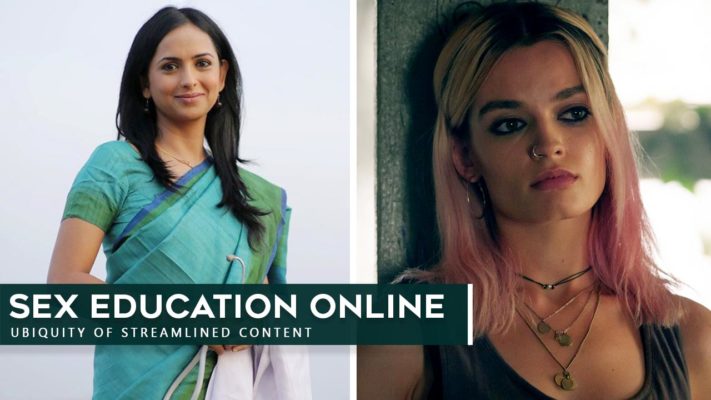 Dismal Scenario Of Sex Ed, Ubiquity Of Streamlined Content And An Average Teenager!

The necessity of sex education in India is directly proportional to India’s habitual denial over the same. “Sex ed” is generally hushed about before finally discarded due to its incompatibility with Indian culture and social ethos. Now that we are recovering from the first golden age of Indian television that started during the 80s, and seeking refuge in Netflix-HBO-Amazon generated content, the possibilities are endless. If you have missed the steam from 90s television with its goofy sitcoms, dysfunctional family moments or fantasy period drama, well you still need some wait in the wings. While mainstream Indian television is at peace with creating sexist content, offering slimy allusion to sanskar and social regression, how far streaming sites have managed to bridge the gap? If Indian television is apathetic towards the shifting paradigms of culture, have streaming sites fared any better? I am afraid not.

Globally, many countries have taken the initiative to launch informational broadcasts on sex, some of the popular ones being programs like Midwest Teen Sex Show,  and Sex Gets Real with Dawn Serra (podcasts), Soul City in South Africa (a soap opera). Unfortunately, in India, sex education is cluttered around late night binge watching by adults on whims. Of late it has become highly inaccessible and expensive as well, obtainable only by the privileged. Even then, is it doing any good?

The Hodgepodge Of Sex Ed In Indian Market

Recently, Sex Education at Netflix has managed to acquire the status of sex ed in India, and people are watching it for further references.  Its success is a bawdy teen drama firmly rests on gross and graphic content and should be the best watch in solitude. Most of the series or TV shows that are disseminated, backed with little or no research, remain a thorough massacre of what sex education should actually be. Netflix has invested popular tropes into the show to deliver it as an empathetic and raunchy comedy; high on teenage drama viewing sex as a surreal performance, or a technique, the show nonetheless prefers to sit on the fence! Like a cherry on the top, Sex Education employs a bunch of stereotypes mouthing lewd jokes, and till the very end concerns itself about the characters getting laid. For many people, these upright and lurid content have become ABC guidebook for sex and pleasure.

This fantastic bowl of sex ed that is being served with other dishes on the side is a huge letdown. The limited scope of discussions on gender and sex, sexuality, puberty and intimacy to the extent of bullying or harassment surrounding the same has proliferated the growth of sex ed horrors. Even at the surface level, sex ed programs for Indian adults possess an arrogant disregard towards pleasure activism and reliability of sex toys, body politics and constructive dialogues to debunk popular myths surrounding sex. On the whole, even on chic streaming platforms, sex education programs have rendered its basic tenets, old school and dull, somewhat out of use. Let me remind you, these are the basics of PSHE (personal, social, health, and economic education), that other countries teach at primary and secondary school levels.

Closer at home, change has come from the most unexpected quarter! It is the same place that has witnessed its advertisement revenues shrink, as Netflix-Prime are eating into the Indian habit of watching live TV. Doordarshan, owned by Prasar Bharati Board, is stirring some positive controversy by airing Main Kuch Bhi Kar Sakti Hoon that has touched a viewership of over 400 million. MKBKSH is the brainchild of Population Foundation of India and addresses some of the issues like sexual health, contraceptives, and health issues, arguably in crude Indian ways that would be consumed by the mass.

Doordarshan comes with a whiff of fresh air when sex education in India seemed to rely on misconceptions and prohibitions. Then again, it is MKBKSH’s entertainment quotient that has a high TRP rate, continuously harps on the typical Indian soap elements to gather viewers, it is flashy and unsuitable to country’s millennials.

“Our target audience was the most disempowered groups in India with television, but it wasn’t just for them. On gender issues, everyone needs education!”- Poonam Muttreja, the Executive Director of Population Foundation of India.

The 4 million Doordarshan’s viewers is invariably a small amount when compared to the viewership rate of other online channels! It is still uncertain how much a conventional soap opera can be resourceful when big brands are playing it cool. Netflix alone has 5 million subscribers, Amazon 11 million, with Hotstar topping the chart with 75 million. As Netflix predicts, its next 100 million subscribers will emerge from India. Surely, sex education can be informational or purposefully lurid, as long as it is not perpetuating in the same age-old restrictions. In India, there is no dearth of misconceptions surrounding the notion of sex ed in itself. For instance, sex ed culminates into children having more sex!

It becomes important to mention here, India alone contributes to 11% of the world’s teenage pregnancies. The immediate solution to this problem is not Sex Education or Netflix monopoly that create the wrong kind of buzz among viewers of an impressionable age. It lies in generating programs that mirror people with their insecurities, and lack of resources, and most importantly citing real-life examples. Only the programs diverse in execution and techniques can attract a large number of viewers across varying demographics.