[VoxSpace Selects] Why The Joker Is The Best Representation Of The Modern Society? 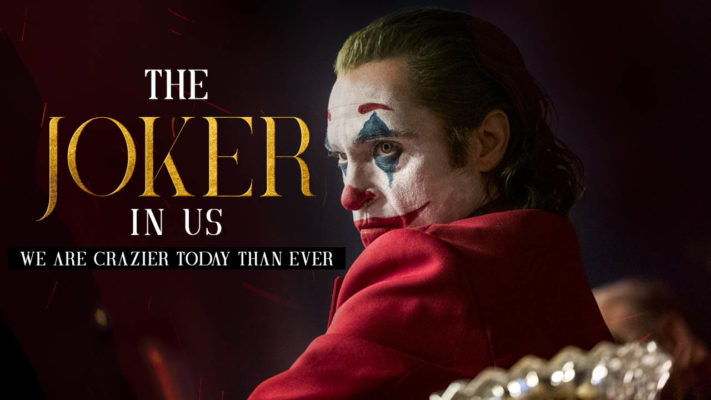 We Are More Joker Than Batman

‘Is it just me or is the world turning crazier by the day?’, says Joaquin Phoenix’s Arthur Fleck, in the upcoming film – DC’s ‘The Joker’. The line, in itself a sharp comment upon the contemporary society that we as people almost unenthusiastically populate, makes a great amount of sense when being uttered by a man trying to spread some jokes. To give you a context here, I am referring to the trailer attached below, where we see Phoenix’s Arthur Fleck, struggling to come to terms with the rapidly changing world around him, as it were both socio-politically and economically, and questioning his internal prospects.

The world we are talking about within this trailer is the mid-80’s Capitalistic American Society, garnished thickly with Scorsese’s Taxi Driver vibe. Arthur Fleck, a loner in the big city, finds his calling in making a name for himself as a standup comic. Although it is implied that he isn’t ready for the crazed up world that he is stepping into, it takes only moments to realize that sometimes it’s the other way around. Sometimes the world isn’t ready for you. And then this line comes, before Arthur Fleck, punched to the corner, flips into a character, maniacal to say the least, and steps out to exact revenge on a society which has crossed him. And perhaps that is where, the above statement, delivered in the hissing voice of Joaquin Phoenix, resounds emphatically within the present society.

The statement, although coming in the context of a pathos, reflects unequivocally upon us. We make our Joker. As much as that is true, I believe that we are Joker in more ways than one. Each of us trying to make our little bubble of a world fill up with wonderful memories and joyful pretzels, suddenly are slapped back to the reality. A reality which unapologetically fucks you up. A reality which grabs you by your collar, punches you in the stomach and tells you that you aren’t worth shit. You aren’t the wonderful person that you think you are, because well hey, you ain’t making money like it’s no one’s business. In this regard, you are only as good or bad as the next guy sitting beside you watching the trailer or reading this article with you. People want you to be Batman, to slip in an analogy here, but in pressuring you to be that, you turn into a Joker.

What Drives Us To Become The Joker?

A shorter and lamer answer would be – The World. But that’s not entirely true, is it? You see, it’s not just the world. You can be unaffected and rather be unscathed by anything happening around you when you don’t really give a fuck about what is happening. Not because you’ve attained nirvana or some stuff like that, but because you are too dumb to understand what is happening or so shit scared to comprehend it. I’ve met people who are scared to the core to even look at, think about and realize what’s happening, beyond their realm of functioning. I feel sad for them. They are, for the lack of a better word, restricted and limited. At the end of the day, they don’t matter.

However, if you are someone who actually gets it, and starts thinking about the world and your place in it, then perhaps you are on your journey to become someone relevant. Then again, every relevant thing comes with its own price tag. The situation here is that, when you actually care, that is when you get rattled up. Because it is when you are looking, that is when you burn your eyes. And that is precisely when you take the path of becoming either an inspirational maniac like The Dark Knight, or a diabolical one, like The Joker. Two sides of the same coin scenario.

The Trigger Points For Madness

You see, when you get beaten up by the society, when you are left alone to deal with your ambitions and dreams, when you are pelted with stones for wanting to do something that the society cannot process, and when you are questioned by the mediocrity of the populace about your ‘poor’ alternative choices in any manner whatsoever, that is when a tipping point appears. Based on the intellect you have, your mind gradually gives up on the cage of people around you, and then you fly. You don’t just fly, you soar. Higher, Madder and Crazier, Baby!

But then, come to think of it, since time immemorial, we humans have always had these two sides to pick from. We are driven by the constraints of the society and serve it well like the caped crusader. Or question its reality and burn it to ashes like The Joker. It all depends on what you stand to achieve, or rather what makes sense within the webbed yet discreet chambers of your mind. In a world we live in, we see mediocrity being celebrated. We love to see flaws and imperfection, as a manner of acceptance. And thereby, establish a culture of normalcy, based on the idea that everyone needs to live. And sometimes everyone doesn’t mean all of us. More often than not, everyone means everyone who is similar in their tastes, aspirations, and understandings.

Anyone not conforming to the ideals of the society (again defined by a bunch of mediocre people representing a bigger bunch of mediocre people) becomes an extremist. We are comfortable calling each other asshole, bitch, slut and dick. But just approach someone and say ‘what the fuck is wrong with you’, and the whole world loses its shit. Everyone goes into the spiral of self-introspection, mildly induced depression and due to the utter lack of validation, wake up to the sense of self-deprecation. And the guy who says it is almost suddenly branded as a radical extremist. Normal society can only be normal in normal situations or the circumstances which it creates for itself, and thus pats itself proudly to be progressive.

And so, a thinking questioning man becomes The Joker. You see, as more people adhere to the normalcy factor, there will always be a bunch of individuals who will sit down and ponder over the meaning of it all. But then will society allow them to think so much. Nope, not done at all. They will want them to think as much as they can understand. And thus, a wall is built around single individuals across the horizons of his thoughts, which makes his mind shatter itself by hitting the wall repeatedly. And then one fine day, it breaks out and becomes something spectacular. The mind embraces the madness. At that point, the protective structures that the society has built for itself, naming them as rules, guidelines, morals, ethics and decency, all count for nothing but just dandelion petals in the windy cyclone. And then the life which was always thought to be a tragedy suddenly is transformed into a comedy. The intellectual and the questioning mind starts to laugh and swirl around the mediocrity of the society in a fluid motion. The Joker becomes just a happening in the process.

Sadly, the world cannot understand. Of course, it can see the writhing pain of a tortured soul, but never quite get it. They adhere to their rat’s ass logic of presuming that through pain comes art. They couldn’t get more naïve. You see, art always exists. As much as the blood flowing through your veins. Through pain comes only a representation of art in a manner which could be understood by lamer minds. A true artist, whose intellectual boundaries have been washed away, understands that art is a thorough existence, not momentary persistence. You cannot try hard to be an artist. You can hone it, but never quite define it.

And in this sense, the symbol of The Joker is that of an artist who wants to burn the world down. Isn’t it art? Well, I’ll leave that question to the ‘intelligence’ of society. Until then, the modern world will inadvertently and unintentionally make Joker out of our thinking minds. And come to think of it, we are Joker in our own ways. We do burn, and we do burnout.

2 thoughts on “[VoxSpace Selects] Why The Joker Is The Best Representation Of The Modern Society?”