[VoxSpace Life] How To Not Start A Social Revolution 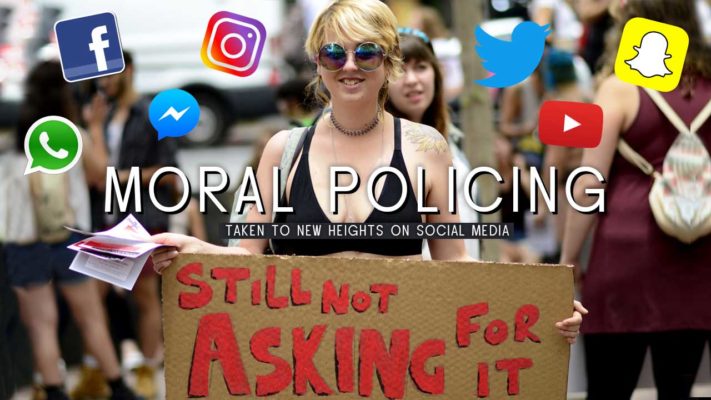 Think of the last time you changed your opinion. Were you in a mall surrounded by angry women telling you that you are wrong while also filming you? Or perhaps you and your family were targeted on social media where hundreds of random strangers reached out to you personally telling you that you are ugly. Think of the last time there was a social change. Was an angry video shared with “disgusting” in bold written right under it? If you answered “no”, you are right because surprisingly enough that is not how people’s mindsets change. (except that they are traumatized)

Yet, such an incident occurred on the evening of 30th April, when Shivani Gupta from Delhi first shared a video on the social media platform of Instagram of her and a few friends confronting an older woman and demanding an apology over her remarks on women wearing short clothes(which in her opinion invites rape).

An Outburst Of Internalised Misogyny

Shivani Gupta and her friends were having a meal in a restaurant when an older lady speaks to them, advising them against wearing short skirts and similar clothes as, according to her, they are the reason for rape. The younger women then did not hesitate to disagree and speak out against her remarks. When the conversation soon turned into a heated argument the older woman asked a few men in the area to rape them because they “deserve(d)” it. The women then followed her into a nearby store filming her and demanding an apology.

The video is filled with angry remarks on both sides, a bystander is seen joining in reminding the older woman that rape is a very traumatising experience, that must not be wished on anyone’s daughter. It soon gained a lot of attention and was shared on various platforms with several people expressing their disappointment and anger over the older woman’s thoughts. Conversations about internalised misogyny and the reeking roots of patriarchy soon ensued. Instagram took down the video due to its community guidelines, which acted as a fuel, it was seen as an act of censorship.  Meanwhile, Ms.Gupta found the Facebook profile of the older woman, pictures here revealed that she too had worn “short clothes” previously. People of the internet then proceeded to leave negative comments and message her on her facebook profile (as found by Ms. Gupta).

Why This Must Not Be Condoned

This flow of incidents took a sharp turn as things got out of hand, what was supposed to serve as an active voice against the victim-blaming culture soon became an incident of online chaos and cyberbullying. The fact that the older woman’s thoughts and remarks are harmful to the society is a no brainer, it is incredibly crucial that such incidents must be talked of, shouldn’t be shut away in the quiet box of “that’s just how things are”. Words matter. Action matters. Arguments? Not so much.

The video that soon hit almost half a million views shows the younger women and the helpful bystander indulging in fat shaming, making fun of the accent of the older woman, constant aggressive demand for an apology. Remarks such as “Small brain capacity” and  “she has a body to flaunt and she will, you don’t” were made. Although initially this anger may seem justified, it must be obvious that such an instance is not leading to the woman’s change of opinion all of a sudden. The identity of the woman was not hidden in the video taken, nor was her consent taken when her account was made public and her pictures shared. This lack of responsibility on their part led to a whirlwind of misbehaviour towards the “aunty”. When her account was not found anymore (was made private), users found and shared her husband’s profile leaving vulgar, disrespectful comments. The same ugly tools of fat shaming, threatening with rape, invasion of privacy and other nasty comments about her sexual life were used against her. It is surprising how this hypocrisy was lost on them.

The fact that the older woman indulged in similar acts does not justify the actions taken against her. It does not help fight the toxic culture but only multiplies it. Victim blaming cannot be fought with targeting and rape threats. This incident must have acted as an example, as a proof of the toxic reality that many of India’s children grow up in, as a conversation starter to acknowledge and think of solutions for internalised misogyny and the ugly face of victim blaming. Instead what happened was the suppression of said mentality. A loud “you are wrong” will never cause a change, although it may oppress it.

What We Must Take Away

A conversation with reasoning and politeness, as impossible it may seem to have achieved then, would have had a louder (albeit less viral) impact on the issue. Victim blaming is a serious reality that must be curbed from the roots by challenging the stubborn stupidity it is based on, with logic and conversation. The answer lies in education and awareness, not winning a fight, not making someone’s “life living hell”, not extracting an unwilling apology by targeting and bullying. The apology may seem like a victory, but it is only a silenced voice of the still existing opinion.