[VoxSpace Selects] Billie Eilish – The Teenager Of The Century 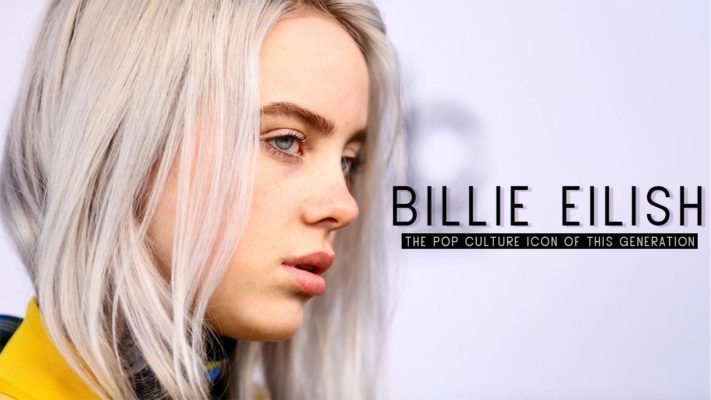 A teenager with a billion hits, a pop star at 17, a debut album before she turned 18, sold out concerts and more than 15 million followers on Instagram. Who is he, you ask? Firstly, it’s a she. Secondly, its the name you’ve probably heard a million times in the last few months- Billie Eilish.

Billie Eilish Pirate Baird O’ Connell was born on 18th December 2001 in Los Angeles, California. Her parents, Maggie Baird and Patrick O’ Connell are both from the entertainment industry. Having an Irish and Scottish descent, she was raised in Los Angeles’ Highland Park. Eilish began singing with her elder brother Finneas O’ Connell who had already begun to sing, write and perform his own songs with his band. She had been homeschooled her whole life and joined the Los Angeles Children’s Chorus at the age of eight.

The Birth Of An Icon

It all began for her in October 2015, when Eilish recorded her song “Ocean Eyes”. Although it was originally written by Finneas for his band, Billie sent it to her dance teacher who helped her choreograph a dance to it.

“Ocean Eyes” raged quite a storm on all music platforms, cannon blasting Eilish into the limelight she had perhaps never dreamt of being in. After releasing it on Soundcloud, the track went viral and soon landed Billie a manager, after it was re-released by Interscope records (whose catalog of singers include Lana Del Rey, Lady Gaga among others). A year later, in November 2016, and Bille finds her track streamed 132 million times on Spotify and a video on Youtube with 55 million views.

Bellyache And Don’t Smile At Me

After rocketing toward musical success and grandiose, Eilish went on to release the single, “Bellyache”, on February 24th, 2017. Bellyache was co-written and produced by her brother Finnease and later, a music video was directed by Miles and AJ, which was released on March 22, 2017. Later, Eilish also released a song, “Bored”, which was added to the Netflix series, 13 Reasons why’s Soundtrack. Soon, she released another single, “Watch”, and another follow-up single after that, “Copycat” which were released on 11th July 2017. On the same day, she also announced her debut EP, “Don’t Smile At Me”.

Each Friday in July, Eilish went on to add a single to her EP. It was in this manner that the popular singles “Idontwannabeyouanymore” and “My Boy” were debuted to the world. Finally, Don’t Smile At Me was released on August 11th, 2017. Eilish went on to collaborate with American rapper Vince Staples and created a remix for “Watch” which was titled “&burn*. It was later added to the re-release of the EP.

When We Fall Asleep, Where Do We Go?

In the early months of 2018, Eilish began her “Where’s My Mind” tour which ended in April 2018. Eilish collaborated with upcoming American singer Khalid and released a single “Lovely” in April 2018, which she added to the soundtrack of the second season of the Netflix series, Thirteen Reasons Why. She also released singles “Bitches Broken Hearts” and “You Should See Me In A Crown”. Eilish went on a rampage of singles and released “When The Party’s Over”. She dropped a bomb after releasing another single, “Bury a Friend” by announcing her debut album When We All Fall Asleep Where Do We Go?. The fourth single to the album, “Wish You Were Gay”, was added to the album on March 4th, 2019. The album was finally released on March 29th, 2019.

A Mockingjay Among Pigeons – What Sets Eilish Apart

Her music, though fairly falls in the category of mainstream pop, boasts of a unique flavor that is not resonated with any other artists’ music. Eilish has carved a niche with her music as she talks about her generation’s hope, vulnerability, anxiety, and heartbreak. Her song, Bellyache, was inspired by the consuming guilt and regret she felt when she would occasionally steal toys from her friends or shoplift. “I’d leave and want to throw up with guilt. I used to think the police were going to come to class and take me away from my parents,” she said in an interview. “It was completely irrational, but there’s nothing like that overwhelming feeling, and to say that a child can’t write about those feelings because they are too young is bogus.”

Billie says, “I’m the type of person if you tell me to stop doing something, I’m going to do the opposite.”

Billie, being a revolutionary of Gen Z, is quite a rebellious teen with a sporting “fuck you” attitude that is quite endearing. Her out-of-the-box dressing sense, her brash fashion style has made her more of an icon than an outcast. Her brutal yet relatable lyrics that echo in the chambers of every teenage heart has made her quite the goto artist during times of angst, vulnerability, depression, and guilt.

An Outlandish Persona – Things I Love About Billie Eilish

Her words are a testament to her old soul personality while her lyrics strike a chord with all types of people. Billie has created quite a phenomenon with her “I don’t give a fuck for you” attitude and has inspired thousands of people to stand on their own feet. In an interview, she talked about how social media had quite a regressive effect on her when she would reply to every negative comment and direct message until she wriggled off of them recently.

Billie is quite proud of the fact that she has not done any drugs and will perhaps never do as she is “not interested in them”. Billie and her family are all vegans. In an interview back in November 2018, when a compilation video emerged online showing Eilish experiencing random bouts of tics, she came out saying that she has Tourette Syndrome.

Eilish has struck a chord within me, just like she did with scores of other people. Her openness about her personality and image is quite fascinating and inspiring and something that all of us can take home at some point or the other. To quote her, “I’m really different from a lot of people, and I kind of try to be […] I’m super, super out there […] I like to be remembered, so I like to look memorable. I think I’ve proved to people that I’m more important than they think. […] A lot of people are terrified of me. I have a resting bitch face.”

Related posts:
[VoxSpace Life] The Depression In Our Youth - Decoding The Hopelessness Nature Of The Malady
[VoxSpace Selects] Black Sheep : A Cautionary Tale About 21st Century Xenophobia
The Coolest Game Of Thrones Fan Art Over The Years