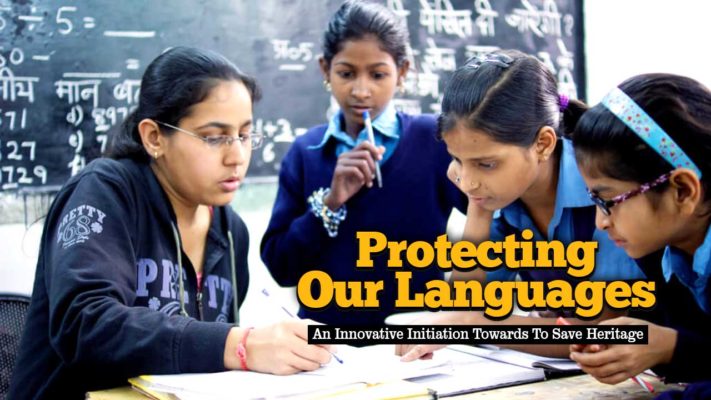 The Indian romanticization of English started with denigrating regional and non-regional languages and has been a prevalent practice in India. This country has done very little to dislodge English from its position of status quo and reinstate back India’s almost extinct and soon-to-be-endangered languages to their formal glory. Almost all the prestigious schools are dedicated to producing monolingual students, batches after batches, conversing in English. English is the one language to aspire for, especially in the backward socio-economic classes, and its inexplicable thirst, has left  a clump of broken languages, rarely spoken and mostly forgotten; the coastal languages are at the risk of drifting towards amnesia.

Urbanization and growth of corporate edifices are partly responsible for this radical shift in the coastal lifestyle. As dwellers are moving away from the coasts, they are also shaking off their languages and adapting languages that would offer better jobs, financial stability, and easy mobility. Out of 780 languages spoken in India, only 22 could make it to the official records and fewer still have managed to retain its relevance in daily lives, job sectors, and public discourse, English remains the instrument for bullying and formalities alike in India that has visioned its social advancement with the learning of this language.

Beyond every parent’s aspiration, English sustains in nooks and corners of social institutions unable to shake off its former colonial grandeur and flamboyance. English might have unified a generation that has learnt to communicate keeping aside language nuances but English has also affected some 780 odd Indian languages that are struggling to survive its fury.

Crowdfunding In The Context Of Indian Ecosystem

Recently in Bengaluru, crowdfunding that had previously helped projects see the light of the day had helped Sri Acharya Paathashaala sail through. The school is last of its kind in Melukote, teaching Sanskrit to around 20 children who gather beneath a leaked thatched roof.  The century-year-old school collected a little over 26 lakh from around 1000 donors spanning across the globe that would bear its expenses to recover from shambles. Its meteoric success opened a new thread of discussion regarding the feasibility of crowdfunding to reawaken Indian languages from decades of inertia. At Melukote, Sanskrit is more than a tool for communication. Imbibed within daily life, the language is finely woven within the socio-historical aspect of Melukote, a place that has witnessed catastrophic plunder of their culture under the reign of Tipu Sultan.

We are now living in a century that has seen more sophisticated pillages of cultural identities compared to its preceding ones,  following the footsteps of Acharya Paathashaala can actually prove constructive in saving at least 400 out of total 780 languages of India. India is not a safe haven for regional languages either, they have remained buried under the inescapable dominance of English- a language that has submerged every other dialect, and locutions into its massive flow.

The Feasibility Of Crowdfunding For Language Protection

Projects like Onir’s I Am (a 2010 Hindi language film), major startups, and public schools have been benefited by India’s several crowdfunding platforms, working towards a better reality. Therefore, an initiative to fix the plethora of dead languages, forgotten authors, and literature with the help of crowdfunding would not be a farfetched dream. Perhaps the best instance of such an initiative is the collaboration of the students of the School of Oriental and African Studies to save the classes of Prakrit, an Indo-Aryan language from getting dissolved. The crowdfunding was launched on the university website that procured them the administrative cost of the entire course! Prakrit is imperative to the understanding of Jain, and Sanskrit languages along with their text and scriptures; almost a link connecting to the prestigious languages dating back to antiquity.

Crowdfunding has previously helped demanding projects to materialize, it could do the same to preserve some of these languages in regular parlance. Preservation of its written records could help these languages to be archived for the distant future. The reservation practice should encompass those languages as well that hardly enjoy any status of power and prominence in society, as Sanskrit or Tamil do, and scholars, but nonetheless are on the brink of extinction and need to be saved by the virtue of being a tool for exchanging knowledge, information and emotion.

Prevent The Measured Death Of Languages

Wikipedia mentions the possible extinction of languages like Lotha, Naiki, Tarao and Aimol from the continent’s consciousness besides the 22 languages, lost in the last fifty years as reported by The Economic Times. India could proudly boast of 1,652 languages in 1961 which got dramatically reduced to 808 just a decade later. Scholarly predictions surrounding the rise of a monolingual generation in India thriving in blissful ignorance of how language is inherently rooted in one’s identity formation seems not far away. Reviving a dying language is not a fortnight’s job and could be achieved by its accommodation into academia and public reading, starting workshops and research projects on them and finally by exploring the depth of its contribution.

Even offficial languages like Assamese, and Marathi today stand vulnerable, assimilated, and politicised for the sake of polarisation. Besides a systematic restoration, we need these languages to be spoken in the hinterlands of India by their own people to the extent of reading the bulk of literary works, in original versions and unabridged. Every language, I believe, is brimming with words and associated emotions that cannot be supplanted by other languages nor can be confined to demographics. Linguistics is extensively a human property and it is time we start taking accountability for the loss of it.