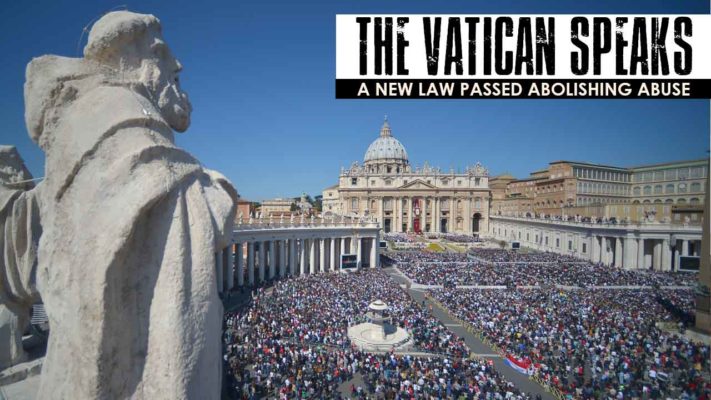 The First Law To Report Sexual Abuse From The Vatican

Pope Francis issues the first law that states officials present in the Roman Catholic Church worldwide need to report any sexual abuse or attempts that have been made to hide such abuse to their superiors. The law that was set in place protects the people coming forward with their claim along with offering anonymity for the whistleblowers. Besides this, the new law outlines the procedures for the preliminary investigations when the person accused is a religious figure. This law states that the priests and nuns who believe if a cleric or sister have participated in abusive actions they must be reported immediately.

What Does The Law State?

The law is going to be put in effect on June 1st and dioceses (a district under the pastoral care of a bishopric the Christian Church) have a year to implement it. These abusive actions in accordance with this law include sexual acts with a minor or a venerable person. It also protects adults who have been threatened in any way by religious figures to perform or submit to sexual acts. The production, possession or distribution of child pornography, as well as any efforts to cover up such actions, have also been covered in this law.

This is the first time that a law has been passed which requires the clergy to follow local civil reporting requirements. Before this was left up to the individual priests and nuns to decide whether or not to report such crimes. The Pope also mandated that the victims need to be supported in all ways possible. Even though the investigations are conducted confidentially the victim is not required to keep quiet on the matter. If this law is implemented to it’s fullest extent, the Vatican will see a large amount of abuse being reported and cover-up allegations coming its way as this law can be implemented retroactively.

Criticism Faced By This Law

While this move by many has been seen as a win, there have been a lot of voices that criticize this law. The main concern that victims and their advocates have against this law is the lack of police involvement.

The Global Victims group, Ending Clergy Abuse (ECA) has stated that “The church should establish the law for reporting and justify the exception,” said ECA’s Peter Iseley. “Instead, they are using the exception as a pretext for not reporting sexual abuse to civil authorities and to keep abuse secret.”  Many feel this new law, while a step forward in the right direction is just not enough. The lack of outside involvement in the matter has made people question its usefulness. Another concern that has been raised in regards to this law is the lack of punitive measures in place if someone doesn’t comply with the rules.

At the end of the day even though this is a move that progresses the fight forward that we wage against abuse done by the church, there’s a long way to go. While Pope Francis has set the framework for what needs to be done, we need to push for more so that there are no cases of exploitation in the church premises or by the authorities.