Breaking The Wheel: Why Game Of Thrones Finale Could Not Break The Power Cycle 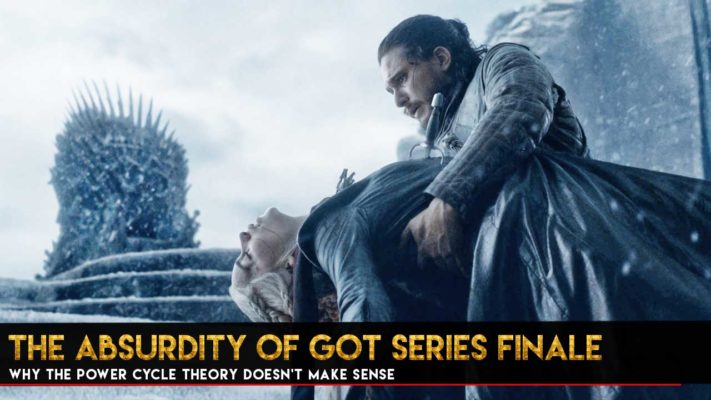 The series finale, ‘The Iron Throne’, brought an end to the eight years long journey of the worldwide celebrated series Game of Thrones. Game of Thrones had maintained a strong and steady success in terms of pleasing its ever-growing fan-base at least up until its seventh season. However, with the eighth season, things began to go downhill as complaints of a rushed and compromised script began to make their way making the final season a debatable success. Nevertheless, the final episode has tried to redeem some of its prior reputations by at least attempting to cause a whimper if not a gasp.

With the ashes settling over Westeros (well, and the script), the person that ultimately sits on the most desired throne –symbolically, since the actual throne has been melted away by Drogon –can and cannot be called a surprise depending on how one sees it. While for one, the new king of the seven kingdoms is someone the audience had arguably least anticipated; for another, owing to the litigious nature of politics that usually is seen to be playing out in Game of Thrones, the events of the series finale, ‘The Iron Throne’, could be labeled predictable.

Love For The Status Quo Mixed With A Poor Ruling Strategy

The functional core of Game of Thrones, undeniably, has been to build a narrative agenda around a spectacle of violence, very often succumbing to racial and gender politics as well as building a “better world” on shaky grounds (literally!). Consequently, the Iron Throne found itself unjustly let down because the showrunners decided that the ultimate solution of the show’s conflict, after years of building it up, was to give the throne to whoever is left after the slaughters and the killings are done with. If the show ever had any interest in widening the possibilities of the political leadership in Westeros beyond maintaining a status quo or keeping up with the monarchy, that interest undoubtedly had burned itself out much like its script.

Most prediction theories worked themselves around Jon Snow murdering Daenerys (which came to be true) and then finally seating himself on the iron throne as the rightful heir to it. Even theories that had placed others like Tyrion or Sansa on the throne claimed that it would ultimately be Jon’s decision to give it away. Hardly anyone could have thought that Jon would have no opinion as to who finally sits on the throne, or that the most obvious choice for the next ruler would be, not the one person effectively ruling the North in years, Sansa, but the “three-eyed raven”, Bran –the keeper of stories! In fact, Bran seems so capable that he spends his first meeting with the council searching for a dragon, while Tyrion is left to preside over the meeting.

Initially, Game of Thrones structured around destabilizing the highly stereotyped fantasy tropes. One of the most intrinsic fantasy tropes that the show had set to subvert was the notion that men are the only ones who are capable of ruling. However, the final season reduces the show’s two most powerful queens, respectively, into insanity and into a disappointing death. It was a choice that the show-runners had made to rest Westeros’ political stability on a few men and the same choice expresses itself to be both decidedly inconsiderate and regressive. While Bran sits on the throne, one can only help but wonder if Sansa could have been the chosen ruler had she been a man.

In favor of Sansa Stark, she would have made a more efficient ruler at Westeros. To put this into perspective, Sansa has been the only person who has constantly placed the well being of her subjects before anything else while also taking up extensive strategies supporting her subjects in order to survive the winter. Furthermore, with respect to survival skills, experience, and proven leadership qualities, Sansa would have made a more capable ruler than Bran, the Broken. While one would argue that she has the North to rule, if one is to carefully look into the sociopolitical background of Game of Thrones, ruling over Winterfell is much more of a gender-oriented consolation.

The last and the penultimate season of Game of Thrones have killed off almost all of the powerful and active women characters including Daenerys Targaryen, Cersei Lannister, Melisandre, Lyanna Mormont, Ellaria Sand, and Olenna Tyrell. It is quite hard to accept that after all that these fascinating women have fought for –humanity, power, survival, conquest and a better world –their deaths have been in vain for all they destined to was the establishment of a council of privileged men, sitting to rule over Westeros.

The Power Cycle That Remains Yet Unbroken

Perhaps, it would have made for a more interesting solution if the makers of the show had presented a more believable debate course on how the political fate of Westeros could be evolved or expanded beyond the present leadership. On the contrary, the establishment of Bran in the power and the formation of his council as an unequivocal and unanimous positive development for the show’s final resolution and for Westeros seems problematic. The final episode is far from breaking the wheel in terms of breaking the power cycle, voicing for the governments that rise out of the already established bases of power instead of emphasizing on the democratic spirit of the citizens. In fact, at one point, Samwell Tarly proposes the very same idea only to be laughed at and ignored by the other prestigious lords and ladies.

Instead of going for a more democratic approach, the final episode preferred the placement of what perhaps is the most powerful house in the kingdom at the present on the throne in the name of Bran Stark. No one is suggesting that anybody else would have done for the role of the ruler instead of Bran. All that is being said here is that if there was any point where the mightiest minds of Westeros could have changed the way that power and governments worked under the many complexities of Westeros’ politics, the final episode was its chance that had to be taken.

Instead, although Tyrion stresses at a faint optimistic approach of choosing the future heads of the state by none other than the realm’s noble houses as opposed to the monarchical hierarchy, there is hardly any indication that matters have significantly changed to a course that could face up to the conventional cycles of power already established by the preexisting governments.