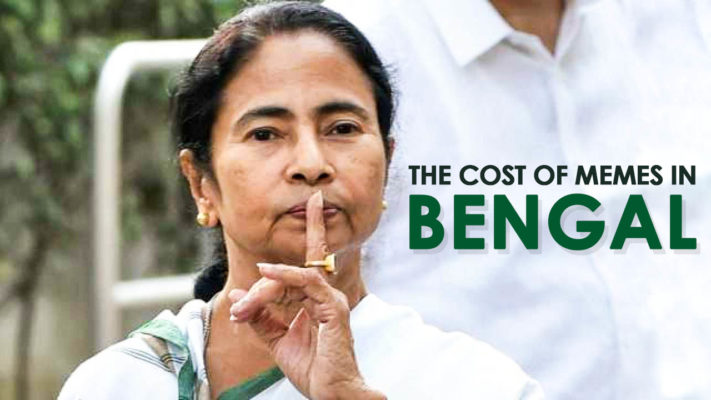 Political satire, long held under strict censorship, is simultaneously going through a metamorphosis under the hands of revered humourists, cartoonists, stand-up comedians, and meme artists. Recently, the spectre of Priyanka Sharma’s morphed image of West Bengal’s CM Mamata Banerjee and her subsequent arrest sparked off a debate regarding the extent of freedom of expression in Bengal. What happens when in Bengal an individual carves a space to indulge in the objective ludicrous? Banerjee who came into power dethroning the communist government has shown similar aversion to lampooning when Ambikesh Mahapatra and Subrata Sengupta were jailed for circulating her cartoon.

Satire, a powerful weapon especially when presented visually, has the potential to mobilize political opinions besides creating a comic effect. However, a civilian receiving immediate arrest after sharing troll also explicitly points out why we need biting satire now more than ever! In the world’s largest democracy, getting jailed simply for exercising freedom of expression means we are indeed not very far from the Orwellian world of constant vigilantism of Thought Police through a telescreen!

In 2019, scrolling through the newsfeed and hitting share on a laughable meme is indeed not a singularity, well, unless you are in Didi’s Bengal! Talking of political satire, a couple of months ago, Bengal witnessed a hard scuffle between Mamata Banerjee government and director Anik Dutta regarding the ban on Bhobishyoter Bhoot-- a critique on right-wing political ideologies. Satire and political lampoons had a tough time in Bengal and we all are a little scared of cartoons. It is almost at par with spreading religious blasphemy punishable by law! The atrocity is more perceptible in an age when popular media has sworn by the art of increasing audience engagement by memes and caricatures taking into fray world’s influential leaders like Donal Trump, Hillary Clinton, Mahmoud Ahmadinejad, and Narendra Modi.

The Impregnable Charisma Of Her Subtle Dictatorship

The fodder that comes from quality satire is quintessential to the smooth functioning of democracy. Bengal cartoonists like Naren Ray, Chandi Lahiri, and Debasish Deb had never cringed away from sketching political cartoons when Bengal was under the command of Leftist regime. Newspapers had their special compendium of political cartoons drawing from literature and culture resulting in a beautiful coalescence of storytelling. It was long before newspapers were enclosed into an app, or news stormed into our newsfeed. However, today with the easy accessibility of information, it remains a matter of shame how democratically elected leaders tend to regulate our interaction with the same!

The trouble with satire in Didi’s Bengal has now assumed the designation of farce, challenging individual’s right to dissent or critique. For many of us, it might not be easy to sympathize with Priyanka Sharma when we confuse her right as a democratic citizen with her political beliefs! However, at a time when we are literally standing at the precipice of bureaucratic dystopia, it falls on us to thwart off the “private eye” constantly threatening to strip us off those rights that it once vowed to protect.

I Will Fight Case: Priyanka Sharma Who Was Arrested For Sharing Mamata Banerjee Meme | ABP News

A Bengal Without A Cartoon!

We are living in perilous times, when a meme/cartoon is forcefully turned into an act of defamation and individuals are persecuted for engaging with it.  Even during the Emergency period that lasted around two years (June 1975 to March 1977), cartoonists boldly took digs at Congress via illustrious sketches. Abu Abraham’s cartoon mocking President of India Fakhruddin Ali, and Rajinder Puri’s idea of a pious Indira Gandhi with two angel’s wings are some instances. Such a masterstroke is undeniably dangerous in today’s Bengal; no cartoonist or satirist can dare take on the hegemony.

The Placid Art Of Revival

Satire is important, albeit sometimes it is stinking artless and lacks clarity (like Priyanka Sharma’s meme), in making you reckon the political history you are living in. In a series of derisory political happenings, it is through satire we, the common mass, lampoon, critique, inform and form a democracy. Many people have picked up this habit after memes succeeded in striking a chord within multitudes, and social media boomers became pretty creative with it.

Social media has remained active in ridiculing and poking fun at the status quo producing harmless laughter after media channels literally went on to become parties’ paid attendants. In the annals of time, common people had been entertained by valiant organizations like Punch magazine that was a meaningful outlet for pro-Democrats who were asphyxiated by UK’s oligarchic elites.

Political memes cannot be easily dismissed as a fad because they are born out of contemporary times and act as a guidebook to politics and society. Technology has helped us to keep the discussion on political demagogues alive long after political cartoons bade farewell from Bengal’s dailies. Let’s all welcome political cartoons and memes that are not laden with sexually explicit content, or wrong information. As civilized citizens, we cannot forever live in a rabbit hole dutifully resigned to “Private Eye”, and fanning the zeitgeist. In Bengal, Satire has a long way to go before it gains autonomy, like cartoonist Ekanath Padmanabhan Unny once remarked: “When a cartoon is turned into a crime, democracy becomes a joke.”