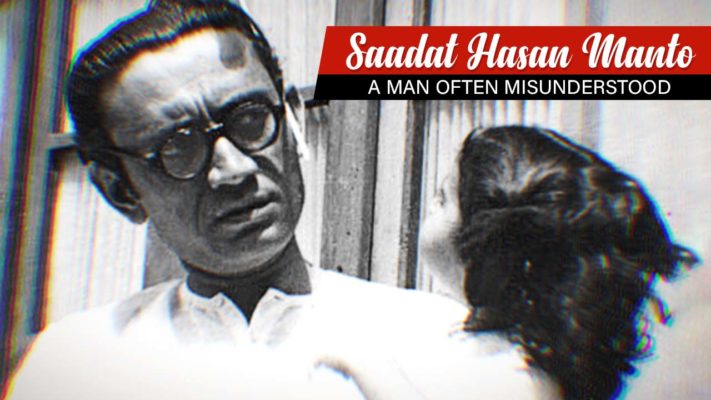 Manto – A Man Who Experienced The Partition Like No Other

“Hindustan had become free… Pakistan had become independent soon after its inception but man was still a slave in both these countries — slave of prejudice…slave of religious fanaticism… slave of barbarity and inhumanity,” writes the Urdu writer, Saadat Hasan Manto. Tracing the works and understanding the life of a man as complex as Manto is not easy. Manto’s journey juxtaposes the stark realities and the complicated times in which he lived. His experiences cry out the truth that many have and perhaps still try to cover up under false grandeur.

Saadat Hasan Manto lived during tough times, torn between nations –nations he had never perceived differently, nations he grew up calling his own. Manto’s loyalties lay elsewhere, not with one nation or another, but with a time that was beyond religion. Manto’s loyalties lay with his art, and his art belonged to his truth –a truth that realized the realities of the Partition.

Manto was born on 11th May 1912 and though he died at a young age, his words and art continue to enthrall writers, readers, filmmakers and the audience alike. Manto’s life and works, both adequately hold up the pangs of the partition and perhaps that is why more and more writers and filmmakers are engaging themselves with adapting his life and works into their literature and films.

Partition Through The Eyes Of Saadat Hasan Manto

Manto had once written in a letter to his friend, “Now before our eyes lie dried tracks of blood, cut up human parts, charred faces, mangled necks, terrified people, looted houses, burned fields, mountains of rubble and overflowing hospitals. We are free. Hindustan is free. Pakistan is free.” Manto’s life stands witness to greater confusion and chaos in the time of a political uprising that led to perhaps some of the boldest, darkest and the truest works of Manto’s literary career.

Manto had set his foot in Pakistan after the Partition had torn his most beloved country into parts but never could he really come to terms with it. His life in Pakistan was that of a struggle –a struggle to unite his binary existence, a struggle to accept the realities he had been forced into. It was during this time that Manto came up with his masterpieces –Toba Tek Singh, Thanda Gosht, Babu Gopi Nath, Mozalle, Iss Manjhdhar Mein –which went on to create some of the most powerful, dark and iconic characters in the history of literature.

The Partition was one of the most bloody and brutal mass movement in the history of humanity. To Saadat Hasan Manto, the Partition, the very act of tearing apart a nation with a strike on its religious core, appeared exasperatingly absurd. Although Manto had established himself as a writer before the Partition, it was only after August 1947 that he gained momentum to his reputation owing to his writings on the horror and the futility of the Partition. In his half-life of 43 years, Manto had his name on twenty short story collections, three essays, five radio drama collections, one novel, two sketches and a bunch of cinema scripts. However, Manto’s works gave rise to controversy for his content dealt mostly with dark themes –alcoholism, prostitution, and sexual desire –often earning him the reputation of obscenity. Manto’s works foretold the fate of Pakistan –the ascent of Islamic fundamentalism.

The Darkness That Resides Within

“If you cannot bear these stories then the society is unbearable. Who am I to remove the clothes of this society, which itself is naked. I don’t even try to cover it, because it is not my job, that’s the job of dressmakers,” wrote Manto. Manto’s works, often blamed for obscenity, bared its soul out into exposing the hypocrisy of the society. As Manto writes, “For me, remembrance of things past has always been a waste of time, and what’s the point of tears? I don’t know. I’ve always been focused on today. Yesterday and tomorrow hold no interest for me. What had to happen, did, and what will happen, will.”

Manto might have written for an era that belonged to him and his cruel realities, but his works speak for themselves with relevance even today. In her book on Manto, The Pity of Partition, historian Ayesha Jalal writes, “Whether he was writing about prostitutes, pimps or criminals, Manto wanted to impress upon his readers that these disreputable people were also human, much more than those who cloaked their failings in a thick veil of hypocrisy.”

Manto’s short story, ‘Bu’ or ‘Smell’ paints a sexual picture of the encounter between a rich man and a prostitute, the smell of whose armpits intoxicates the man. This was perhaps the first of Manto’s short stories to have been called out for obscenity under the laws of the British, although he was not convicted. Preti Tanuja justifies and sides with Manto’s artistic content when she explains, “Manto does not shy away from the idea that women have sexual needs and their own sexual vision that has nothing to do with being in love with someone else.”

In another of his stories, ‘Thanda Gosht’ or ‘Cold Meat’, the readers are overcome with shock when the protagonist, a Sikh, comes home to his sexually charged wife who stabs him after he is unable to perform before confessing about raping a dead woman. Writer Mohammed Hanif, who writes almost with the same edginess as Manto, defends Manto’s literature when he says, “Reading Manto made you realize that literature did not always have to conform. It does not always have to tell polite stories.”

Watching From The Close Quarters

Ayesha Jalal remarks that Manto had “witnessed the psychological trauma of 1947 at close quarters.” As a writer and a person who had been shaped greatly by Bombay’s vibrant heterogeneous culture, Manto had refused to move to Pakistan initially. However, when one of his Hindu colleagues and best friends claimed that he would have killed Manto had he not been his friend, a shocked and hurt Manto moved to Pakistan with his family overnight. Here, he wrote ‘Toba Tek Singh’, one of his most celebrated works that highlight the absurdity of Partition.

The story presents Sikh and Hindu patients being moved into India from a mental asylum in Pakistan. One of the patients, a Sikh, incensed, refuses to move and places himself on the Indo-Pak border. Manto, clearly equates Partition with madness and remarks, “Don’t say that 100,000 Hindus and 100,000 Muslims have been massacred. Say that 200,000 human beings have been slaughtered. And it is not such a great tragedy that 200,000 human beings have been butchered but the real tragedy is that the dead have been killed for nothing.”

Manto had always carried within him a yearning to come back to India, to Bombay, to a land where he had left his heart and soul behind. Addressing his close friend, Ismat Chugtai, Manto had written in a letter, “Try as I did, I wasn’t able to separate Pakistan from India and India from Pakistan. Again and again, troubling questions rang in my mind: Will Pakistan’s literature be separate from that of India’s? If so, how? Who owns all that was written in undivided India? Will that be partitioned too?”

Men may die, but an artist lives forever. Perhaps Manto had known this always, and so he writes, “…and it is also possible, that Saadat Hasan dies, but Manto remains alive.” Manto drew his last breath on January 18, 1955. However, the farsighted man that he was, Manto had always had himself prepared for his death and had his own epitaph ready to be carved on his tombstone –“Here lies Saadat Hasan Manto and with him lie buried all the secrets and mysteries of the art of story writing. Under mounds of earth he lies, still wondering who among the two is the greater story writer – God or he.”