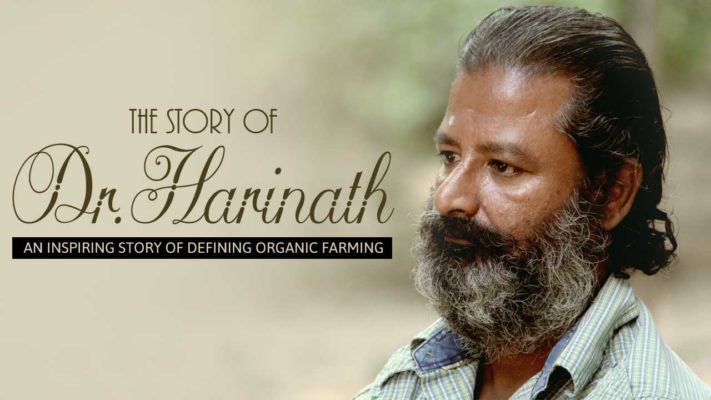 Remember the film, ‘Swades’? The film could not stand tall up to the box office standards. Despite that, it did leave a mark in the viewers’ minds. The film showcased Shah Rukh Khan as a protagonist, who was torn between his passion and his motherland till the point he left his high profile job with the NASA and stayed back in his country to work for his own motherland. Now, you might say such an ideal person exists only in films. But, we would like to differ here for we want to acquaint you in this article about Dr. Hari Nath, a former DRDO scientist and a post-doctoral fellow at one of the most coveted universities of USA. Despite being in a position of power and having a lucrative government job in the defence sector, he left everything to start his own organic farm.

It was in 2005 when he was serving as a scientist in DRDO, that Dr. Hari Nath received the opportunity of pursuing his post-doctoral research at the Medical University of Carolina, USA. As a government employee, he had to take permission from the higher authorities to grant him the leave. This is when the first turning point occurred to him in the form of a special note by the then Indian President, Dr. APJ Abdul Kalam. Recalling Dr. Kalam’s letter to him, whom he was acquainted with since the former’s days as the President of DRDO, Dr. Hari Nath says, “Kalam sir granted me leave for two years, but he asked me to promise that I would come back and serve my country.”

A Research Intended For Commoners Wasn’t Benefitting The Mass

Dr. Hari Nath was a scientist at Defence Research and Development Organization or DRDO for 12 years before he embarked on his new post-doctoral journey to the Medical University of Carolina. His post-doctoral research in India saw Dr. Nath develop some path-breaking drugs for cardiac ailments alongside the best scientists and researchers of India. However, once he took off for the USA to complete his post-doctoral research at the Medical University of Carolina, Dr. Nath’s perception towards medicine – especially why and how it was created – underwent a great transformation.

Although he was awarded numerous drug patents and published a few important research papers, somehow he felt his research was not reaching the common public that ought to be the direct benefiter of his work. He says, “Most of my research outcomes were not reaching the common public, but were benefitting multinational drug companies.” Like perhaps many other scientists, who wish to work for the people rather than for the MNCs, Dr. Nath become unhappy with himself though he kept the revelation personal.

The Magic Of Moringa Leaves

Things continued to be normal until his mother developed arthritis and lumbar spondylitis. It was since then he began feeling trapped as a medical researcher. All he could do was advice his mother to undergo treatment on the telephone. Visiting doctors also did not serve any purpose as all she was handed over was painkillers and IV injections that came with its own set of serious side effects, including gastric ulcers. Recalling his mother’s turmoil, Dr. Hari says, “The pain became so unbearable that one night she called me and was crying about feeling trapped in her body, unable to escape the pain.”

Desperate to find a cure to his mother’s illness, Dr. Hari began rapidly finding the solution in various research works, until he came across one by a Japanese scientist that discussed the benefits of moringa leaves – how it can treat over 200 diseases including arthritis. In fact, the same concept had been a part of our local folklore, where moringa leaves are held with high regards. Dr. Hari shared this recipe with his mother, who consumed the leaves raw after blending them. This recipe upset her stomach, which is when Dr. Hari asked his mother to boil the leaves in water and consume that instead of the leaves. To everyone’s surprise, this recipe worked like a miracle and after a couple of days when the doctor inquired about her health, all she did was laugh and say, “What pain? I am free of pain!”

Moringa Gave Dr. Hari A Fresh Idea As His Mother Received A New Lease Of Life

It was later in 2015 that Dr. Hari returned to his hometown, Pennagaram in Tamil Nadu, in order to take better care of his mother. By this time, he developed a special skill to turn moringa leaves into a powder along with other beneficial herbs that could cure a variety of diseases. It was then that his mother asked Dr. Hari to take it up seriously for the general good. Today, his dedication has seen him creating the famous “moringa bullet”. It helped numerous locals suffering from diabetes, arthritis and high blood pressure. And that is not it. This usefulness of moringa leaves made him realize how nature’s bounty has the solution to all kinds of health issues and urged him to research more into organic farming.

Discussing the need to eat healthy and how since childhood good nutrients shape our well-being, Dr. Hari notes, “When I was a child, I had a lush green childhood, with healthy farms and our soil was rich and our diet– healthy. We ate mostly millets.” He also discussed how our immune system gets its most important nutrient from mothers’ milk, and slowly becomes stronger with proper food and healthy eating. “We have a large microbial world inside our intestines that help in digestion, and this changes with the food we eat. The millet diet we earlier consumed was very useful for our gut bacteria to process vitamins, but our diet today makes it weaker,” observes Dr. Hari.

The Essentials Of A Diet

Talking further about the importance of fibers and the essential nutrients, Dr. Hari marks how refined flours and polished white rice takes away most of the good things from our daily diet. And, when this is combined with the increasing dosage of fertilizers and other chemicals, our diet simply transforms at such a hurried pace towards the worse that our guts cannot take it healthily.

Dr. Hari further notes that just switching white rice with red or brown rice will not do the trick. One has to pay adequate importance to the soil as well. In most cases, the soil is now loaded with lethal pesticides and fertilizers. High-quality organic manure plays as much importance to the general physical well-being of people as healthy diet does. Understanding and experiencing all these on a first-hand basis enlightened Dr. Hari with an idea that could address people’s health issues directly, and not remain trapped within volumes of research papers.

Speaking about what made him take up organic farming, he says, “If there is one shortcoming of research science, it is that it is a very reductionist approach. We break the human system down to organs, organs into tissues and tissues into cells, finally to the molecular level. We keep dissecting and see if drug molecules work to cure ailments. All this does is address the disease and not the root cause of the disease.”

Embarking On A New Mission By Combining Science With Farming

The first thing as an organic farmer that Dr. Hari decided to do was create a soil that would sustain good crops. He makes the soil first before sowing in seeds of various plants and crops. He uses the traditional method of utilizing compost pits. Depositing cow dung, urine, dry hay, and green moss, its ingredients are mixed with the soil. This makes it rich in nutrients and minerals. Thereafter, he sows the seeds. Today, he grows various varieties of crops including amla, moringa, and curry leaves along with other important seasonal vegetables. And with pests, he has his own organic way to keep his plants clean. He makes pest-repellents using ginger, garlic and green chillies. He soaks them in cow urine and sprays it on the crops during cultivation.

Being The Ambassador Of Nature

Understanding that it is impossible to be a one-man army to usher in a visible change in the society, he has reached out to local farmers and farming communities to switch to organic farming. Taking about this he says, “We need to be the ambassadors of nature and take charge of the food we grow by respecting nature.”

Throughout his interview with The Better India, Dr. Hari maintained that we have an “umbilical cord attached to our soil.” If the soil is healthy and fine, we become disease-free and healthy, and in case the soil suffers, we bent down with various diseases and ailments. Before signing off, Dr. Hari clarifies his relationship with farming. He says, “Farming is a science for me; it is art, and it is culture. It is a way of ‘Vasudeva Kutumbakam’, which means ‘the whole world is a family living together’.” Truly, considering his relentless dedication towards organic farming and health in general, it would only be good to say that he is indeed making Dr. APJ Abdul Kalam proud by doing his own bit towards the nation.