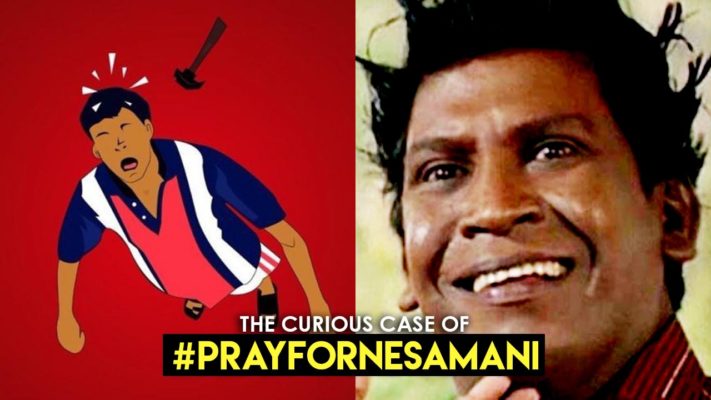 Words About The Hash Tag That United The World!

It was just a normal day at Social media. Timelines filled with nothing but comments that oozed hatred and jealousy, pointless mockeries and senseless judgments. Like a breeze out of nowhere on a scorching day, came a meme which was composed of a hilarious reply to a question about “Hammer”. The reply sarcastically and sweetly paid its homage to the one and only Vaigai Puyal, Vadivelu!

I am damn sure the creator of the meme would have intended to inject a tinge of humor to the one who sees it. But he didn’t know that the meme, that little bundle of laughter also had the seed that could possibly germinate into a huge storm!

Like hungry ants huddling around a drop of honey, people around the world started flocking together and the #PrayForNesamani soon became a worldwide trend and a sensation. The vaguest of tweeters saw their humor quotients increase exponentially. And within a span of few hours, everyone’s timeline gracefully emanated laughter, as if the servers were fed with Nitrous Oxide (Laughing Gas)! In a matter of a few hours, social media websites which are usually a bay to vent out your hatred, a huge reservoir to spit your venoms, flooded with enchantingly sweet nectar called “Humour”!

I gotta admit, I laughed so much after so long and as always happens, laughter doesn’t come alone. It consequentially brings about an embrace-worthy companion called, clarity! And the moment my mind embraced clarity, it laid down a set of takeaways from this historically hilarious movement which was, in every way beautiful and healthy!

One got to admit that these are the times where the legend Vadivelu isn’t so active. With occasional gossips and articles, comprising complaints from various industry people on the arrogance of Vadivelu filling the timelines, the comedian seemed to be outdated, dead and these gossips and hatred coated comments, like vultures were circling on the corpse of his image, relishing on the sweet legacy of his, tearing it to pieces!

Irrespective of the attempts of those vultures, the hashtag proved one thing. No matter how much you paint an artist like Vadivelu with hatred, the art in him will never betray him. It proved the characteristic power of resurrection art holds. Genuine art resurrects an artist. The same could be applied to Ilaiyaraja too. No matter how much people try to sow hatred over artists, the art they have created will ensure a safe hood within the hearts of millions! Art had never betrayed its creator and it never will!

Art –The Ultimate Abode Of Humanity!

The one thing that holds the power to unite people is art. The world today makes sure that we lead a complicated life where we blindly compete with our fellow beings. Everything ranging from a school where the students with lesser marks are admitted to different sections and are restricted from talking to people who scored more, to the politicians who inject the venomous seeds of religion and casteism for their own merits, make sure that we think only of ourselves and lead a selfishly ugly life!

Exhausted after facing a day like this, you come back home and listen to an Ilaiyaraja number, say “Thendral Vandhu Theendumbodhu” from Avadhaaram. The music is so enchanting that the world which seemed like a pit of snakes a while ago now seems like a garden of roses! Such is the power of art!

Imagine you watch a Vadivelu comedy after you’re back! You laugh so much that, as always happens, you feel like spreading the laughter. You tweet the dialogue of him and then some random guy comments with a laughing emoji. Art Unites! It indeed is the ultimate abode of humanity!

Bliss Is Contagious Too!

We all grew up with the notion that rumors, especially the bad ones spread fast like a forest fire. We all strongly believe that negativity is like cancer and it spreads faster than one can imagine. This prejudice is what indirectly manipulates the media houses to focus only on the evident negative side of an issue. If at all there is no “Breaking news” for a particular day, they create one! It’s actually easy! All it takes is to pick a celebrity couple’s picture and give the headline, “Are they going to get divorced?” or pick a glamorous picture of an actress and give the headline, “Wanna know who she is dating right now?”

This trending hashtag proves one thing that bliss, positivity, and fun can also be as contagious as sorrow, negativity, and hatred! A lot of people, ranging from the youngest of users to the busiest of celebrities united to celebrating the character played by the legend!

Humour is a subtle art and the power it bestows on its creator is something immeasurable and indescribable! Let this historical tribute motivate the man to come back and rule again! Let this emphasize the fact that there are millions of fingers crossed, anticipating the “Puyal” to hit them again! And most importantly, let us all remember that something positive can be entertaining and fun too! All credits to the man, Vadivelu!