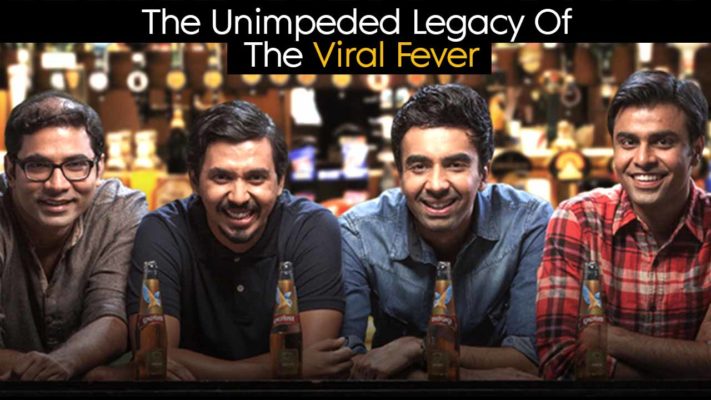 A Decade Long Journey Of Innovation, Relevance, And Laughter

Each day an average YouTuber is bombarded with a new web series, almost always with a concept similar to one he has already seen, almost always breaking the fourth wall to introduce a brand that the YouTuber comments on with “Kya Ad banaya hai Bc.” And yet there are some that stand out with their bag of content that not only leave us with great T-shirt quotes and retorts but characters and moments that really hit a chord.

Mickey, Purshottam; Baba, Chitvan; Mandal and Yogi aur hum sabke Jeetu bhaiya to hain hi. TVF flagged off web series in India before they became cool. But I sat wondering on a gray morning what it was about the content that continues to relate even after a decade of the channel’s first. Here’s what I figured:

I still find myself using the heart behind ‘Jury room’ in times of confusion, tossing a coin and waiting to hear what I really wanted. Pitchers and its writer Biswapati Sarkar gave me that. Tanya from Permanent Roommates stands as the epitome of courage and strength singing “Tu Kaun hai tera naam hai kya. Sita bhi yaha badnaam hui” of the famous Kishore Kumar song Kuch to log kahenge as her event planner threatens her of an impending dishonor that her pregnancy was going to bring her. And of course Ma Da, Ma Da, Ma Da, Ma Da…

Truth. That’s what I’d like any entertainment to play by. I am not sure if I can find myself relating to a four girl group traveling around the world with no mention of money unless my Father is Ambani or the world is a set of a Karan Johar film. And therefore ‘Yeh Meri Family’ stands as my absolute favorite for the childhood memories it refreshed, especially about the summers, mangoes, Trump cards, and the Karishma Kapoor ‘smooch’ that I had to secretly watch as many times as Z Cinema played Raja Hindustani.

Smooch was the word we used back then to refer to mouth to mouths. Smooch is the word that writer Saurabh Khanna used. That and Shaktiman, Sunday tensions and Premchand’s ‘Hira aur moti’ were enough to make the protagonist Harshu, someone I knew. He became a neighbor, a friend whose story I wished to binge watch. And Saurabh sir became my favorite writer for the nostalgia he always brings out in his writing. He has lived and writes what I too have lived. Be it a teacher like Verma sir, slicked and strict or Jeetu Bhaiya who’s more a friend than a professor.

What adds to the nostalgia is the combination of characteristics that are shown in the sibling trio of Tripling and ‘Yeh Meri Family’. They all feel that they all do a lot for the other, while others don’t do enough. “Yaar ye bhaiya log na”. I feel you Baba Chandan. I too am the oldest.

‘Tu beer hai bhenchod’ was the most democratic quote Biswapati Sarkar could give to start-ups from start-ups. Every non-conformist trying to break the 9 to 5 needed to hear that they could be poured into any situation, take its shape and be cheered on for bottoms up. I assume that’s the reason why a lot of comments on TVF videos ask for the show’s sequel.

Leo’s ‘Why do you want to drive out in a bus when you can do so in a car’ analogy in response to Mickey’s inclination-confusion about the big wedding with Tanya in Permanent Roommates was what had me give up on the idea of a million dollar wedding. (Frankly, not just that) The finale of season 2 though, it made sure that I kneeled down along with my lover in a furniture mart and take him for better and for worse.

I assume the 6 Million plus subscribers of the channel to be all very satisfied with the content for it seems to take care of entertainment need of all age groups. There’s identification for a 20-something youngest sibling in Chitvan, a 40-something by face and 5 year old in ways in Purshottam, and an 80-year old dadaji in Mikesh’s grandfather. There’s a Yogi who can’t stop cursing, a Vartika who can’t speak her out to a Vaibhav who can’t either and a Jeetu Bhaiya the antiseptic to every injury. There is something for everyone. If one cannot seem to identify with a character, there are situations like the collective hate for Inorganic Chemistry and the Chai and sutta breaks that they can relate to. TVF…tu bhi beer hai bc.

“Tu chutiya hai, par tu mera chutiya hai,” needed to balance the Yogi-Mandal relationship, no matter how contrasting the two characters were. The writers and creators found subtle bridges between the characters to make the setting easy to accept. There had to be a sober and sophisticated Tanya for an overly romantic and confused Mikesh to make the live-in relationship spicier. A Mumma had to be the maanjha to the kite that was the kids of Yeh Meri Family, in contrast to the Papa who was mostly laidback and unaware of what class their son studied in. My father will relate.

The eye sores of web entertainment that have many of the viewer’s comment against product placements have not left the content creators that I’ve been appreciating so far. Although many of the sister channels of TVF have very out and loud placed their sponsors, the shows I have picked to talk about have the most subtle product mentions ever. The one that stands out for me is the ‘Mutual Fund sahi hai’ of Yeh Meri Family because the brand became papa’s profession, just like ‘Ola’ became Purshottam’s ride and love in PR.

And it has to be because I worked with the TVF team is that a lot of jokes that might be a pass for the general viewer become special for me because I have known some of these people in person. Like the Chairman of Prodigy, irl is Arun Kumar and the character Arun sir plays is very similar to the way he talks in real life. It was, therefore, funnier to have him act as one who really cares a lot about money, for Arun sir is the Head of Production for TVF, and he almost always talked about money and budget. Another such inside joke was cracked when Chanchal mentions this Sameer Saxena who had brought her a rose and Chitvan got her home arrested. Sameer Saxena who is also the director of Tripling must have had his own share of laughs, as I did.