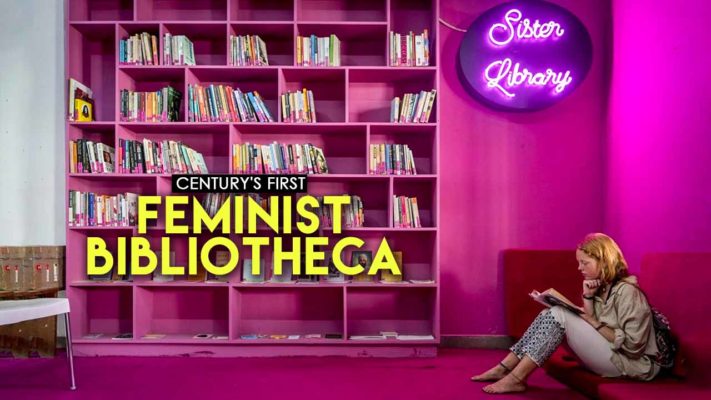 “We did not like to declare ourselves women . . . we had a vague impression that authoresses are liable to be looked on with prejudice.”

Charlotte Bronte wrote in 1850, on her experiences of being a woman author living in a household, in Bronte’s words, “where we live like dormice”. Almost 170 years later, social activist, artist, and a 29-year-old woman would notice that only 20% of her bookshelf comprises of works by women writers. A profession once considered to be solely the business of men has seen prodigious women writers hiding under male pseudonyms, dying a silent death and if lucky, receiving a fitting acknowledgment posthumously. Aqui Thami might not be the only Indian to know of this discrimination, but certainly, the first person to act against the general amnesia regarding the collective struggle of women writers to gain acceptance and fame in a territory hegemonized by men.

“I made a very conscious decision to read women exclusively” Thami’s efforts goes beyond broadening her personal reading list! Sister Library in Mumbai is her initiative by which she plans to reach out to thousands unchecked by geographical boundaries. Sister Library has already been made mobile across small towns and dreams of touring major cities like Pune, Bangalore, Goa, Cochin, and Delhi. The library presently shelters hundreds of literary narratives written by women in the form of novels, graphic novels, and zines. Since Thami’s collection is rather small, the library is currently accepting book donations that would help in expanding the stockpile.

Some celebrated titles from her bookshelf are Marjane Satrapi (author of Persepolis), Virginia Woolf, and Arundhati Roy. Intersectional feminist authors Patricia Hill Collins and Sirma Bilge would prove to be quite offbeat reads when compared to the conventional authors that India’s public libraries are reputed of cataloging. Owing to the fact that Thami’s personal collection is kept for the general readers, we can pin our hopes on accessing versatile and modern printed works.

An Initiative To Do Away With The Status Quo

The library that started recently, on the 15th of May, is rather unconventional in its approach, a quaint pink room occupying one of the posh Bandra neighborhoods. Thami believes that from this aesthetic, little place she could succeed in dispersing knowledge hitherto restricted to a certain stratum of society.  As a social activist, she is aware of the zero or limited availability of some of the finest works, and the importance of bridging this gap.  The venture is first of its kind, and Thami is struggling to retain this small space in as expensive a locality as Bandra is. However, the looming uncertainty has done very little to dim her enthusiasm for making the place an extensive accommodation of books. She shares an umbilical relationship with each of the assorted books that have helped her overcome personal limitations, allowing her a broader worldview.

Reading zines helped Thami to vocalize her rights, proving to be a level playing field challenging, in her words, “the status quo of production, distribution, and knowledge”. Thami by bringing together sparse book titles in a tangible form will simultaneously promote zines to the mainstream reading habit. Mostly written in a razor-sharp, kickass language, the zine has its own legacy in craving a space for women. Sister Library pitches an unconventional move in shelving zines like Pitrusatta ani Narimukti, a body of work that owes its origin to Mumbai itself. Indian zine as a genre has independently published censored content on Queer community, and narratives of female bodies jutted against filthiest slums of India. Thami’s methodical approach of building a library on these self-published, tightly circulated works can position such audacious reads to their legitimate place.

A Room Of One’s Own For All

Besides students, avid readers, and literary enthusiasts, Sister Library dreams of playing a host to women who work as domestic help in the city. A viable alternative to idling away on smartphones or napping, they are welcomed to indulge in Thami’s engrossing collection, defying social constraints like class and caste. In a nutshell, Sister Library has been ideally construed as a space for reading and understanding women, involving as many people as practicable.

India prides itself for having 70,000+ public libraries, only a handful like Delhi Public Library and Saraswathi Mahal Library have tried to focus on socio-economic changes that impact reading patterns. Sister Library is one such initiative that vouches for bringing about a positive change in how readers envision a different world sculpted by feminist essays and critical theories.

“…where one is surrounded by works of women in such a huge number and the possibilities of change it can ignite” in Thamis’s words.