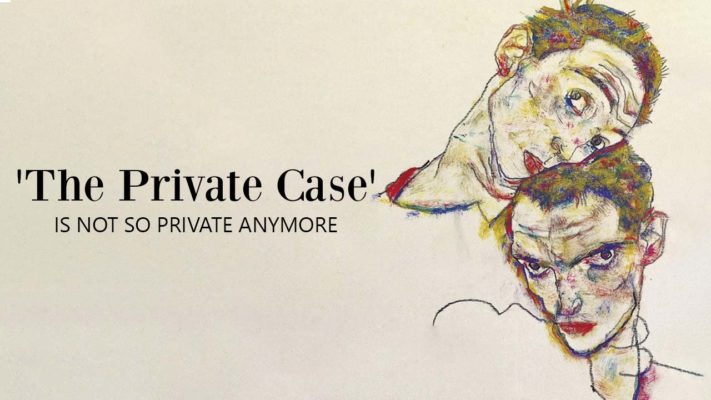 “He sticks his Plough in it, and falls to labouring the soil with all his Might, the Labourer being generally on his knees.”- Rougher Pheuquewell in Merryland.

The lines are not taken from any celebrated pastoral poetry, rather are metaphorical allusions to women’s body; the author, Rougher Pheuquewell, subtly painting the route map with imageries – “Carrots are no Strangers to this soil…”. The Merryland Series, first published in the 1740s, is composed of novels of erotica and was ahead of its time. It’s a revolutionary use of a vulgar tongue that was suppressed for nearly four centuries. They were canons in their own right shoved inside lockable bookcases throughout the last centuries.

The Merryland books were stuffed smugly in The Private Case with its contemporaries like the writings of Marquis de Sade, known with the readers as the kinky and sexually twisted author of the 18th century.

“From an early age, I set myself above the monstrous fantasies of religion, being perfectly convinced that the existence of the creator is a revolting absurdity…”

Accused of rape and paedophilia, the manuscripts were burnt with a circulation of books banned in both France and England. His scrolls, described as full-length manifestations of sadism and misogyny, were first brought by a certain Noailles family and later put on an open display in Geneva in 2004.

And now, the entire volume along with erotica on gay sex by Oscar Wilde can finally sail home to the larger audiences. By subscription, the audience can access the digitalized preservation of The Private Case collection. Certain educational institutions can also read the verses free of cost.

The Lesser-Known Homoerotica By Oscar Wilde At Display

The Private case proudly exhibits Teleny (1893), an erotica that was circulated among coveted circles, more specifically a homoerotic fantasia and literary masterpiece against stern enactment of heteronormative laws in Victorian England. Strong sexuality manifested in telepathic communication, where people were frightened to accept their sexual orientation even managed to arouse homophobic tendencies within one of its narrators and protagonists Des Grieux.

Although the authorship of Teleny is accredited to Oscar Wilde, it is nevertheless subjected to dissent among the scholars. The novel proves to be an important artefact on homosexuality, between a virile Frenchman and Rene Teleny, a pianist of Hungarian origin, illustrated graphically. The language orchestrates the experiences of physical manifestations of sex between two men, putting homoeroticism on a whole different pedestal; an act both painful and monstrous in nature, painful in its conformation to the religious laws of a complacent England. The provenance of such a vivid account of gay sex also had plenty of direct references to Christ’s sexual preferences, his undeniable love, and affection towards his disciple John.

The legendary collection of erotica fascinatingly revolves around sex as experienced by a man and are scribbled with vigorous sexual fantasies that can be experienced exclusively by men. Women are sincerely kept out from the exhaustive exploits of these gentlemen. However, one cannot affirm whether there is any woman writer at all, published under a male pseudonym.

The passages have been restored, unmutilated, glorifying the century’s revolting attitude towards homosexuality through the lens of Wilde. The bulk of printed volumes that were previously ready by a privileged few, would now be read by the common mass. The computerization would be instrumental in thrusting a different image of Wilde, who is wildly known for his inclination towards classical literature and aesthetics. Teleny, as of now, reaffirms the reputation of Wilde, whose later life mostly pivoted around homosexual affairs and other such brief indulgences.

“There was essentially a series of cupboards in the keeper’s room from the 1850s, where material that was deemed to be unsuitable was kept locked away – usually because of its obscene nature, so pretty much anything to do with sex…added to throughout the 19th century, and this carried on until around 1960, when attitudes to sexuality were changing.” – Maddy Smith, the curator of printed collections to The Guardian.

Apart from Pheuquewell and Wilde, prominent French writer Jean de Villot and English novelist John Cleland also get their share of fame in the Private Case disclosure. Harris’s List of Covent Garden Ladies, otherwise known as “man of pleasure’s Kalender”, containing coarse details about women’s physical attributes wrapped in the figurative language of the highest merit, has also been made public. This archived copy when first printed was sold at two or three shillings in pocketbook version as a lurid guide to London’s underworld of sex.

The digitization of gay pornographic elements from one of the prestigious institutions does not merely glue two halves of the world. It simultaneously triumphs an artist’s literary calibre over the State’s rigid censorship for public morality. The merit of The Private Case’s opus lies in the sheer fact that they brilliantly point out the vices of their own lines. A sense of degeneracy is associated with homoeroticism, bringing authenticity and doing justice in reproducing the social mindset that borne these books. Clearly, The British Library wants to popularize and preserve the evolving attitudes towards human sexual orientation throughout the centuries, immortalized through the collection.